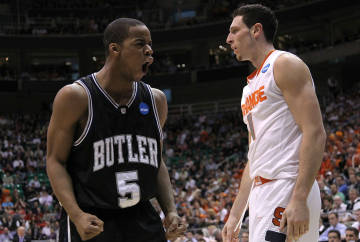 Last night marked a historic evening for the Butler Bulldogs. An exciting 63-59 win in the NCAA West Region over #1 seed Syracuse has earned the Bulldogs their first ever trip to the Elite 8. One win away from the school's first ever final four appearance, it seems that everything is going the Bulldog's way. With the final four being held in their hometown of Indianapolis, it looks like a story book ending might be in order.

The Bulldogs relied on relentless defensive play to capture the victory over the Orange last night. Syracuse players were frustrated the entire evening by Butler's persistent man-to-man defense. These efforts were most notable in the clutch. In the 5 minutes preceding the 2nd half 35 second mark, the Bulldog defense held Orange players scoreless. This facilitated their final run resulting in a marquee victory. Sorry Bear Bryant, it looks like defense wins games and championships.

Strong offensive efforts are not to be overlooked. Sophomore forward Gordon Hayward led all Butler scorers with 17 points. Other top performers were guard Shelvin Mack who totaled 14 points and forward Willie Veasley who added 13 of his own. Although Veasley scored 13 points, he will probably remember most the game changing 3 pointer he made in Butler's final run.

Veasley's clutch three came on a night where the bulldogs were off from behind the arc. On the night Butler shooters were 6-24 from three point range. Fortunately, they were able to make up for these miscues by limiting turnovers and hustling on defense.

Brad Stevens and the Butler coaching staff are extremely proud of  the team, but assert there is still unfinished business. Specifically, Coach Stevens cited the role that the team's "resolve" played in the victory. The illustration of this virtue last night was no coincidence. The Bulldog's have relied upon determination and the principles of "The Butler Way" all season long to champion success.

The next test is the arguably the most important game in the program's history. The Bulldogs will take on Kansas State who is coming off an impressive double overtime victory over Xavier. With one obstacle in front of the final four in Indianapolis, don't be surprised if the Bulldogs exude a new level of "resolve" on Saturday afternoon.