Butler Returns To The Final Four

Share All sharing options for: Butler Returns To The Final Four

Is it too much to ask for a raise less than 12 months after signing a 12-year contract extension? Brad Stevens may need to test that theory in the upcoming months.

For the second consecutive year the coach who looks young enough to be a member of his own team has led the Butler Bulldogs to college basketball's final weekend: the Final Four. Led by a 27-point effort from guard Shelvin Mack the eight-seed out of the Southeast Region slipped past second-seeded Florida 74-71 in overtime, sending the college basketball world into a frenzy once again.

While last year's run to the national championship game is one of the all time great Cinderalla stories in the NCAA Tournament, this season's Final Four appearance may be even more unexpected. Butler cruised through the regular season a year ago, they were led by a surefire star in Gordon Hayward. Despite the all engrossing shock and awe in the aftermath of nearly winning it all, there was a certain degree of expected potential when the brackets first began to unfold.

Yet now, a team that failed to even finish first in the Horizon League during the regular season, a team that many doubted could earn an at-large bid with their resume, is back on the biggest stage of all. We'll have plenty of reaction and analysis here tomorrow, but for the time being, I think Dickie V says it best. 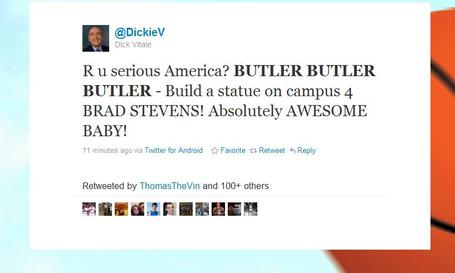