How Kenneth Faried Stacks Up: Does The Rebound Machine Translate To The NBA?

Share All sharing options for: How Kenneth Faried Stacks Up: Does The Rebound Machine Translate To The NBA?

Two facts have become consistently clear in recent NBA Draft history: rebounding is the one skill that most often translates to the pro game, but being an elite rebounder in college doesn't guarantee making a roster. Individuals like DeJuan Blair and Paul Millsap were among the best glass cleaners in the country during their college careers and that has carried on to their NBA careers quite successfully. Others, such as Kentrell Gransberry and John Bryant were in similar positions but didn't bring enough to the table outside of that fact in order to entice a pro team to take a flyer on them.

Kenneth Faried is in the first of those two groups - he will be drafted, it's just a matter of how high. The Morehead State product is the all-time leading rebounder in Division 1 history and has been among the national leaders in almost every rebounding metric since his freshman season. The glaring question for the hyperactive 6-8 power forward is how does the rest of his game translate to the NBA? Every team needs that energy guy, the player who can come off the bench to provide a presence on the boards and play stout defense, but how does the New Jersey native fit into that mold?

As we'll see, Faried's rebounding prowess over the last four years is simply astounding when compared to the other elite draft picks in that same period, but there are still adjustments that need to be made in order for him to capitalize on his potential as a pro player.

Faried undoubtedly has an ideal physical makeup for a rebounder: adequate size, a long wingspan, quick and explosive leaping ability and most importantly a motor that doesn't stop. NBA scouts know that if nothing else, he is not going to quit on a play, as he has time and again shown a propensity for chasing down rebounds well outside of his area. One of the simplest ways to quantify his overall effectiveness is looking at his rebound rate per-40 minutes and how it stacks up with other great college rebounders from recent memory. 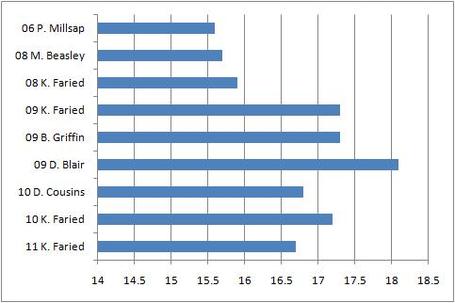 Needless to say, Faried stacks up extremely well when compared to the five other players on this list, all of whom are currently playing in the NBA. Nothing can compare to DeJuan Blair's 2009 season which is arguably one of the greatest rebounding performances in the history of the college game, but the Eagles star isn't all that far off. Since 2006 there have been only four instances in which a player has averaged better than 17 rebound per-40 minutes and Faried has done it twice, the fourth of course being Blake Griffin. Does the fact that Faried posted these numbers in the Ohio Valley Conference diminish his accomplishments? Early skeptics would have said yes, but the power forward has produced at an elite level enough times against pro level talent that those critics have been quieted.

What makes Faried truly valuable on the glass however is the prowess he shows at both ends of the floor. Morehead State spent a majority of the season playing a 2-3 zone with their star camping out in the paint which gives him an obvious advantage on the defensive glass, but as we can see below, he more than carries his weight at the other end of the floor as well. 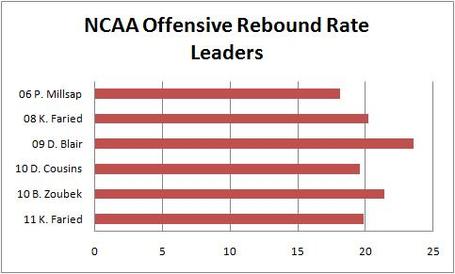 Again, Blair in 2009 is the standard, but Faried was among the top performances in recent memory as both a freshman and this season as a senior. Former Duke center Brian Zoubek's presence on the list serves as another example of elite college production not necessarily translating to an NBA career, but for the remaining players who did land on a roster, the rebound rate has stayed high.

The rest of Faried's game isn't as cut and dry. His scoring ability at this point is limited almost entirely to the immediate area around the rim, with a remarkable 63.4% of his total possessions this season coming as a result of post-ups or offensive rebounds according to Synergy Sports. His back to the basket game is very basic, consisting primarily of making a quick dribble before elevating with his right hand, a move that he executed very well in college even against strong defenders, but there's little question he'll need to develop his game more in the NBA.

Where Faried really stands to make improvements is in extending his range which is almost non-existent at this point. Just 13 of his shot attempts this season were classified as jumpers and only two of those came from beyond the foul line. This is a relatively small sample size to make any concrete judgments on, but Faried's 58% free throw shooting is a pretty good indicator of where he is as a shooter right now. He will hardly be a focal point of any offense at the pro level - likely the fourth or fifth option the majority of the time - but even for role players whose job it is to rebound and play defender, the ability to hit the open mid-range jumper out of pick and roll sets is a necessary skill to have.

There are a lot of question marks surrounding Faried's abilities as a defender, primarily because of the aforementioned zone that Morehead State tends to play. His length and athleticism allow him to disrupt shots around the rim and he has the physical tools to be a solid help defender, but against other elite big men he has struggled at times in certain scenarios. A good example would be to look at the Eagles meeting with Ohio State early in the season where freshman Jared Sullinger routinely established position on Faried and scored inside. The Eagles star wasn't strong enough physically to play behind the freshman All-American and when he tried to front the low post entry, his inexperience with man-to-man defense became evident as Sullinger was able to consistently ceil him off.

None of this is to say that Faried can't and won't be an effective role player in the NBA. Some of the questions pertaining to him today are the same ones that faced players like Blair and Paul Millsap before they entered the League and proved doubters wrong. Faired needs to develop his offensive game and gain more experience as a defender, but his potential as a solid interior contributor off the bench is unquestionable. Most mock drafts have him falling in the lower half of the first round but displaying a more polished skill set in individual workouts could certainly vault him higher come draft night.