Share All sharing options for: 2011 NBA Draft: Can Charles Jenkins Play The Point?

One of the top scorers in the country and quite possibly the most efficient, Hofstra's Charles Jenkins capped off his college career with an outstanding senior season and put himself in a good position to be drafted this June. While the New York native served as options one, two and three on offense for the Pride, he'll now be charged with the task of showing NBA scouts that he can accept a lesser scoring role while facilitating the offense.

Jenkins certainly possesses a solid frame for a point guard at the pro level, standing 6-3 with a strong 220-pound frame capable of handling contact in the lane. Furthermore, despite his scoring exploits, he has proven a capable playmaker for others, averaging nearly 5 assists per game with a relatively low turnover rate given the huge usage Hofstra got out of the him this season.

Perhaps the biggest change for Jenkins in the NBA beyond a diminished number of shot attempts will be the manner in which he gets these shots. While over nearly half of his shot attempts in college came in either transition or isolation sets, he will have to utilize spot-up and pick and roll sets more frequently, while looking to use iso play types as a means of getting the ball into the hands of primary scorers. Luckily for Jenkins these happen to be areas of his game that he has proven very efficient in as we'll see in these visual breakdowns.

As a senior, Jenkins was one of the top spot-up scorers in the county, ranking in the 97th percentile according to Synergy Sports Technology, while shooting over 42% from beyond the arc. While he is unlikely to be a top option at the pro level out of this play type, it is worth noting how efficient he is in this regard, able to find open space where his quick release is most effective. Let's take a look at a common set Hofstra would run Jenkins through this season as a possible option NBA teams could run him through for a quick look from time to time. 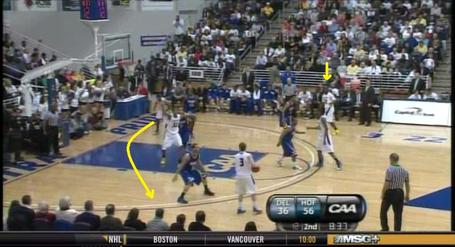 The play picks up with Jenkins on the far end and the ball on the nearside wing. The play begins with another perimeter player running interference along the baseline and curling up towards the wing to draw the attention of the defenders who as we can see are all focussed to the ball side. Not a single head is  turned towards the most dangerous scorer on the floor. 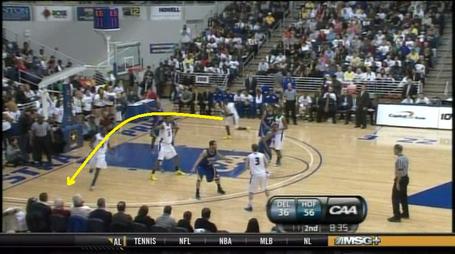 As his teammate finishes the first baseline cut, Jenkins begins his own, trailing the play as the defense remains oblivious to his movements. Now, if you couldn't see it in the first set, you should be able to see in this image that Hofstra is working against a zone defense on this particular play. While these sets aren't nearly as prevalent in the NBA, Jenkins has the kind of shooting ability that he could be a nice weapon against these kinds of plays. 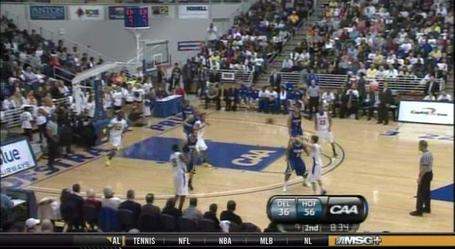 Jenkins cuts the the nearside short corner, doing an excellent job of finding open space in the defense as his teammate delivers the basketball. 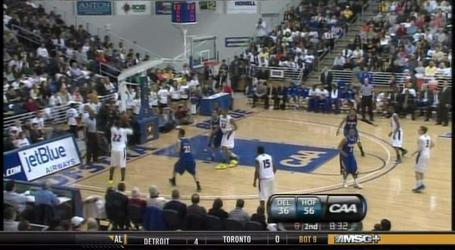 The result of the play is an open mid-range jumper from the near corner, a shot that Jenkins hits with little trouble. Again, the benefit of having a player of his ilk is the presence he can bring as a point guard capable of hurting defenses from the outside if left alone. Right now Jenkins is accurately labeled as a scoring guard, but his mindset and skill set suggest that he can certainly transition to being a floor general who can score when necessary.

Obviously as a player running an NBA offense, being able to operate efficiently out of pick and roll sets is paramount to success at the pro level. This is perhaps the facet of his game that requires perhaps the greatest improvement at this juncture. Of all the passing scenarios designated by Synergy Sports, this is easily the one that causes the most trouble for Jenkins, yielding just .76 points per possession on pass offs with a turnover rate of nearly 11%. He has however proven an apt scorer in this scenario, shooting 47% which was the second best mark in the CAA this season. What makes him so tough to guard here isn't necessarily his speed or explosiveness, but rather the manner in which he reads the defense. 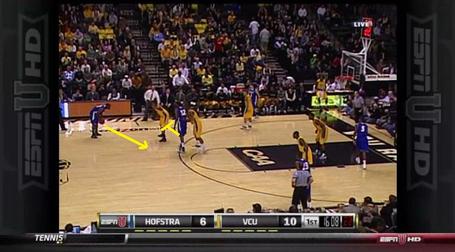 In this example Jenkins is set up on the far wing as his teammate prepares to set a screen sending the ball handler on a drive towards the middle of the lane, but the defense as we'll see is wise to the play coming. 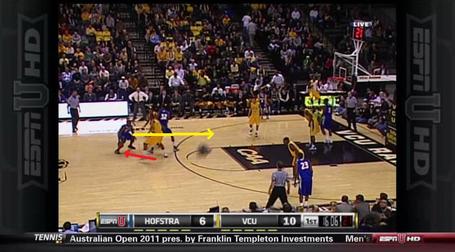 As Jenkins defender is screened, his screener's man comes hard with an over exaggerated hedge, the senior recognizes the direction of the pressure and slips the screen. 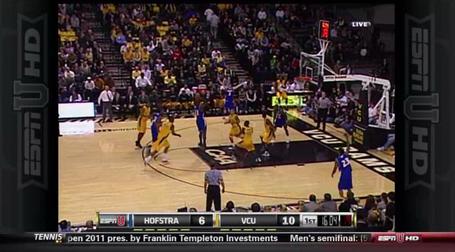 Again, this presents an easy scoring opportunity for Jenkins, who is so quick at pulling up off the dribble, that he is able to get his shot off from just inside the foul line before the back line of defense has time to step up and contest him. Throw in that Jenkins was the best mid-range shooter in the country this season, and suddenly he becomes a viable scoring option off of screens at the pro level depending on the set.

We do need to consider Jenkins as a creator though, particularly in isolation sets, a spot that pro point guards are often asked to operate in. He definitely fits the mold of the more physical guard, not necessarily one who will continuously beat his defender off the dribble, but rather one who can muscle his way into the heart of the defense before kicking to an open teammate. 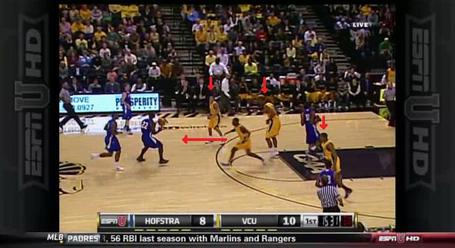 Let's take another look at Hofstra's regular season meeting with eventual Final Four participant VCU. Jenkins receives the basketball near the top of the key and immediately becomes the focal attention of the defense with one opponent flying out to pressure the basketball. 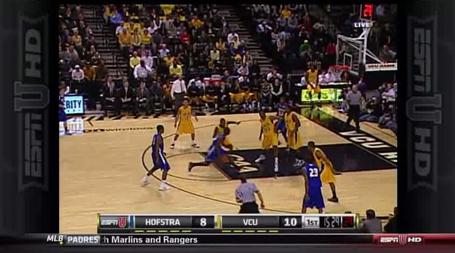 Jenkins capitalizes on the defender flying out at the ball a bit out of control and gains a step on him as he enters the lane. We can see as this happens the defense starting to collapse around the ball as it moves closer to the rim. 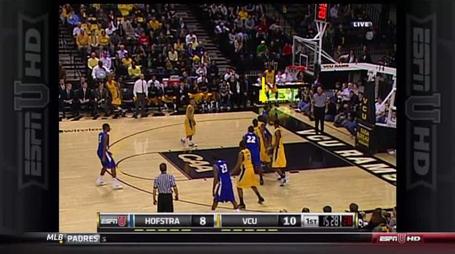 Jenkins makes a great play by holding until the last second before delivering the ball to a teammate camped out on the far block (it may be tough to see in this image) for an easy lay up. Despite all of the attention he has received throughout his career as a scorer, plays of this manner have become fairly routine for Jenkins, who is a very underrated passer.

At the other end of the floor, Jenkins is physical enough and has the necessary lateral quickness to be an adequate defender. He isn't going to make an All-NBA Defensive team any time in the near future (or ever for that matter), but he isn't going to be a liability here either, even though he'll be giving up a couple inches to opposing players on many a night. The senior has drawn comparisons to the likes of Toney Douglass and Marcus Thornton, other scoring guards in college who were asked to become distributors in the NBA. Jenkins absolutely has the skill set to make this transition. His refined scoring instincts, particularly in the mid-range, will give him added depth as an offensive presence in his likely initial role as a back-up point guard.

Jenkins will likely hear his name called on draft night, it's simply a matter of whether or not he'll be starting his career on an NBA roster or perhaps in the D-League to further develop his abilities as a point guard.