Few players in the 2011 NBA Draft class present more intrigue and more uncertainty than San Diego State's Kawhi Leonard. A highly productive player, the small forward built on a strong finish as a freshman and further augmented his national profile by averaging a double-double this season, while showing a unique ability to score in a variety of ways.

Factor in the immense success of the Aztecs this season and Leonard has had enough of a platform to show off his excellent potential to pro scouts for the majority of the year and is in a position to climb into the bottom of the lottery, if not higher. What many need to realize though is how far from polished the forward is at this point in his career, still somewhat stuck between positions as he continues to refine his skill set. There's a lot to like about Leonard though as we examine his strengths, weaknesses and overall NBA appeal.

Undoubtedly, the most appealing facet of Leonard right now is his impressive physical makeup. Standing 6-foot-7 with excellent length and athleticism, he has the ability to player the perimeter consistently and the muscle to bang inside. Most importantly perhaps though is his high activity rate, particularly on the glass where his motor always seems to be turned up. This high degree of athleticism and versatility easily manifests itself in Leonard's offensive profile as we can see below. 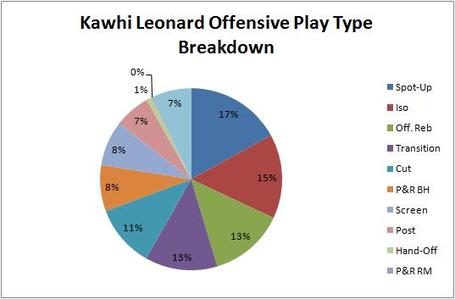 This diverse scoring nature extends to where Leonard's shots come from as well. According to data from Synergy Sports, 53% of his attempts this season were classified as jumper, 37% were shots at the rim and the remaining 10% a combination of shots in the post and runners in the lane. He was also equally as likely to fire from the perimeter (40% of his jumpers were three's) as he was to pull the trigger from close range (44% of his attempts inside of 17 feet). His diverse skill set certainly presents a high level of intrigue, but at this point he only does a few things at a high level that could translate to the NBA right now.

The most immediate area for improvement is the sophomore's shooting, which is only average in general at this point, but is quite rough around the edges when extending beyond the area immediately around the rim. Leonard has a long, slow release meaning in general he needs quite a bit of space to get his shot off. This reflects in his generally sub par marks in catch and shoot scenarios (32%) and when shooting off the dribble (28%). Still, he has shown enough flashes or potential here that with enough time and effort, it is easy to see how these could become consistent facets of his game - especially when considering the significant improvements he has already made from just his first college season.

Leonard's athleticism most often results in him attacking off the dribble, his most consistent tendency out of spot-up and iso sets. Let's take a look at one example just to get a sense of the potential that he shows as a dribble drive scorer in the future. 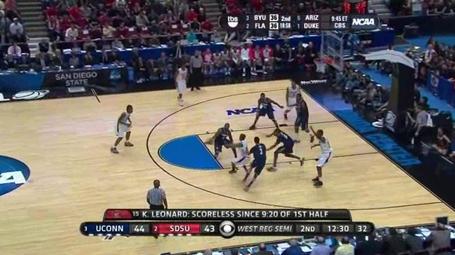 In this example taken from the Aztecs NCAA Tournament match-up with eventual national champion Connecticut, Leonard receives the ball at the top of the key on a kick out from a teammate. 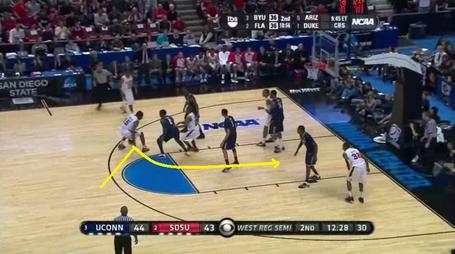 As Leonard dribble towards the left elbow, his defender closes, only for the sophomore to quickly crossover and explode into the lane, blowing past one defender and diving into a litany of others waiting near the rim 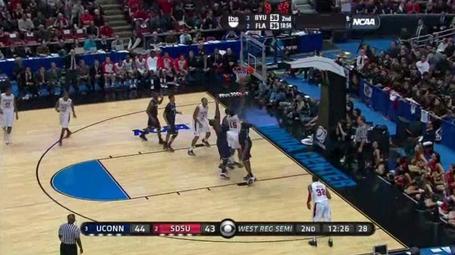 The play ends with Leonard slicing through two more defenders and converting the lay up, a quick and impressive show of skill and athleticism. The problem at this point is the relative inconsistency he has shown in making these plays - a fact very much attributed to his youth and still developing game. There's no question he has the athleticism to make this kind of play frequently at the college level, but his lack of elite ball handling skills at this point have limited him from doing so. As he improves his handles, something we would expect to happen as he trains for individual workouts, he will become a greater threat to penetrate against defenders off the dribble.

What has turned some heads at this point is the manner in which Leonard reads defenses and anticipates. His overall basketball IQ still has room to grow as we'll see in a moment, but he shows a real knack for knowing how and when to find open space. Over 11% of his total possessions this season came from basket cuts simply because his timing is such and his teammates recognized when to get him the ball. 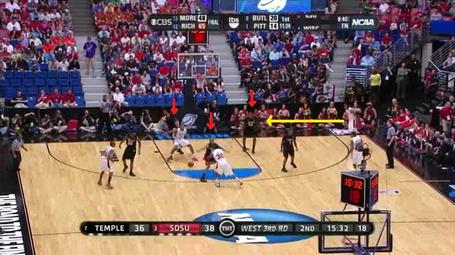 This example is a pretty basic one, but the angle is a good one to properly show the solid job Leonard does of recognizing opportunities to set up a scoring opportunity off the ball. The forward is in the right corner, while the ball at the top of they key is being entered to a post man as he slides into the middle of the lane. The three defenders closet to the paint are all focused on this ball entry and that's when Leonard makes his baseline cut. 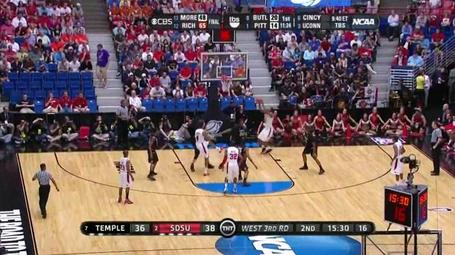 The ball is dumped off to the sophomore and he has an easy two right at the rim. Again, this is a very basic play to illustrate and a simple concept, but Leonard does it better than many. For a player who draws a fair amount of attention from defenses, the ability to move well off the ball is an obvious advantage.

Another play type where he has shown a nice ability to read and react is in pick and roll sets. Typically for a strong, athletic forward we would expect Leonard to get a greater degree of his touches in this scenario as the screener rolling to the basket, but given his versatility, he almost always fills the role of the ball handler here. His decision making is still questionable here though. 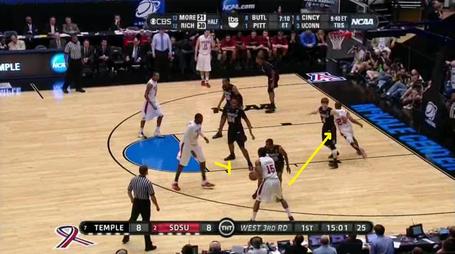 As Leonard waits on the nearside wing, his teammate flashes over from the high post to set a screen. As we can see, another SDSU player is cutting along the baseline away from the play, drawing a defender with him, leaving an open lane to the basket. Leonard recognizes this and dribbles away from the screen towards the rim - this is the smart play. 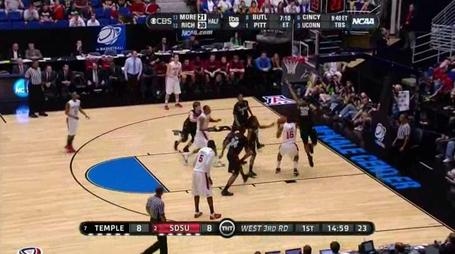 The defense collapses towards the basket as expected, but Leonard makes the mistake of picking up his dribble and trying to pump fake. He shuffles his feet and travels. For a player with his kind of explosiveness and athleticism, there's no question he should be going strong to the rim and at the very least drawing a foul. It's a telling sign that for a player who goes to the basket so often he only averages four free throw attempts per game while playing over 32 minutes. Furthermore, Leonard had a high turnover rate this season specifically in pick and roll sets and in transition as he is still learning to make the smart decision when he gets caught in between options with the ball on the fly. Again, experience will be his friend here.

Defensively Leonard is very active, utilizing his length to guard multiple positions, contest shots and shows a knack for tracking down rebounds. There's no question with is physical profile that he is capable of being a solid defender in the NBA, he needs to improve his fundamentals and decision making however. Often times he tends to exaggerate his coverage and pressure to a degree that it actually hurts him as we'll see in this example below. 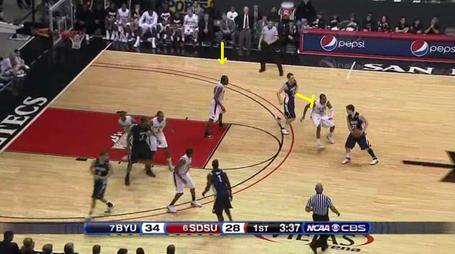 In this example from a game against BYU, Leonard's man flashes to the top of the key to set a screen for Jimmer Fredette who is the ball handler. Note that at the outset of this play, Leonard is guarding a frontcourt player. 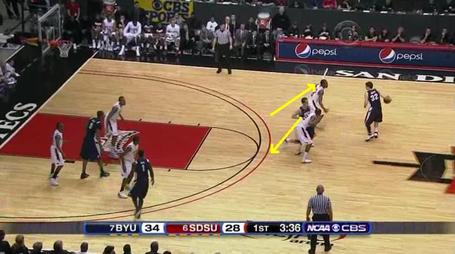 As the screen is set Leonard hedges out strong, taking away the open jumper and the initial dribble drive from Fredette. There are pros and cons to be taken away from this initial set of actions. The pro is that Leonard is capable enough athletically to take over defending a guard like Fredette without any hesitation, this ability to defend multiple positions is clearly a strength that will manifest itself further in the future. With that said, had the screener made a sharper cut towards the basket, he would have been left wide open in the lane as a result of Leonard's aggressive hedge. That wasn't the case this time, but could be in others. 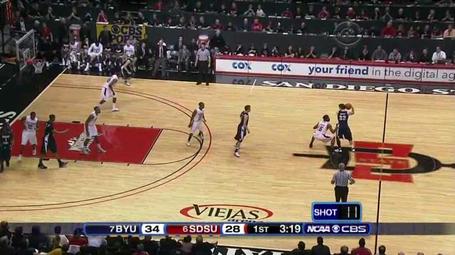 Now that this play is set up as an iso we see a negative defensive tendency that Leonard routinely presents - over pressuring the basketball. Yes, Fredette has undeniable range, but even he isn't going to be hoisting up a jumper from that spot on the floor. Leonard often doesn't give enough of a cushion when defending the perimeter despite having the length to contest shots with a fair amount of space between him and the shooter. When he learns to consistently recognize this and harness his energy, he will be a much more effective defender. 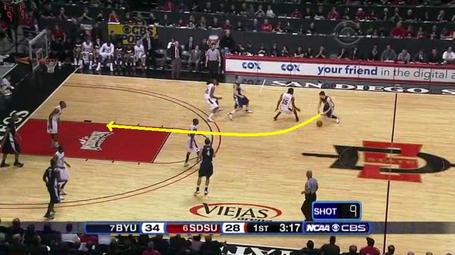 The end result of the play of course is a quick cross over move be Fredette before getting into the lane for a lay up. This isn't to say that Leonard doesn't have the quickness to cover this play, again, his length and athleticism makes him an able defender on the perimeter, but the lack of cushion he provides leaves him more susceptible in these scenarios.

The phrase upside will be tossed around quite a bit in the upcoming weeks when discussing Leonard's future in the NBA - rightfully so. He has a pro body right now, complete with the kind of length and athleticism to be an impact player in the league. Furthermore, he already presents a budding skill set that if further developed will make him a valuable offensive contributor. He's going to be a project, plain and simple. Should a team put in the necessary time and effort to work with him though there is plenty of reason to believe the future is a bright one for the San Diego State product.