Perhaps no player helped their draft status more over the course of the season than Richmond's Justin Harper. The senior power forward exploded onto the scene in his senior season after three relatively underwhelming years with the Spiders in which he never averaged more than 10 points and five rebounds per game.

The 6-foot-10 big man not only significantly increased his scoring (17.9 ppg) and rebounding (6.9 rpg) production this year, but a reasonable argument can be made for Harper being the best shooter in the country. Not only does his size give him a significant advantage over most perimeter oriented players, but his quick release makes even challenging shots a difficult matter. All told, the senior shot 45% from beyond the arc on nearly five attempts per game, while also hitting a scintillating 59% of his two-point field goal attempts. Keep in mind, this is a player who attempted a jumper 50% of the time, not your typical frontcourt player backing opponents down and scoring right at the rim.

This ability to operate comfortably on the wing as a power forward has many scouts buzzing about the long term potential for the Richmond star. There's no question his skill set has the potential to translate over nicely to the NBA as we'll see in a few examples from his senior season.

Overall, Harper was one of the most efficient scorers in college basketball this season, ranking in the 97th percentile overall when using the points per possession metric. When narrowing the field to heavy usage players (500 total possessions or more this season), only four players were more efficient than the power forward and Harper actually ranked higher than Jimmer Fredette and Kemba Walker.

Not surprisingly the largest percentage of his shots come from spot-up sets - over 25% according to Synergy Sports Technology. Rather than posting up and flashing outside when the opportunity presents itself like a lot of face-up big men, Harper will often float around the perimeter looking to occupy open space. He does a nice job of finding holes on the weak side where he can set up and utilize his quick release. 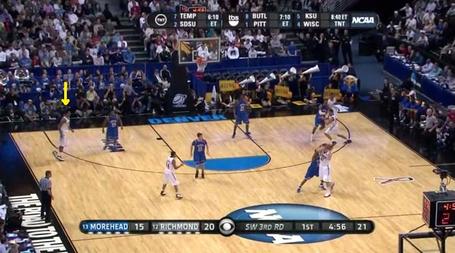 One curious statistic from the season is the high number of open shot attempts Harper was able to get off. Just over half of his jumpers this season were classified as open by Synergy, unusual given his reputation for being such an elite gunner.  One thing he manages to do well is get himself "lost" in the play so to speak, meaning he doesn't utilize a screen and roll situation as much as he gravitates towards a crowd and springs open when the time is right. In this example we start with Harper loosely guards on the left wing with the basketball near the top of the key. 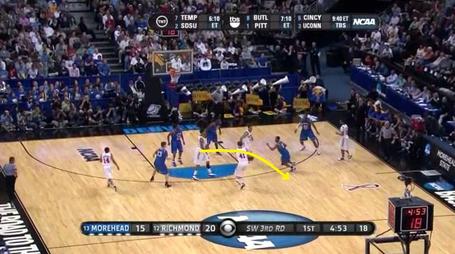 Harper rotates toward the ball and while he feigns setting a screen, never actually does so, rather rotating back behind the basketball. As we can see, there are seven players, including four defenders, in a relatively small area, making it easy to lose a man. 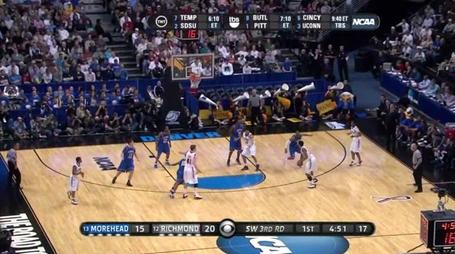 The end result is a quick dump off to Harper who buries the open three-pointer. In the NBA chances are he won't be left this open, this frequently, and with taller, longer defenders the lack of elevation he gets on his shots could be a hindrance, but his quick release is a major weapon here.

Harper is capable of scoring in the post and does quite well, averaging .95 points per possession on 47% shooting during the season. This is his second most prevalent means of scoring and an area of his game that has noticeably improved in recent years. Harper displays solid footwork and has added several moves to his repertoire since he arrived as a freshman, but his frame continues to be the biggest thing limiting his potential as a pro in this area of his game. The senior does pack 225 pounds onto his frame, but he needs to add additional weight and get stronger in order to be an adequate presence inside against pro defenders. His broad shoulders do indicate that he can add more bulk with time though, certainly a good thing moving forward.

Where the forward undoubtedly shows the most potential as far as translating to an NBA offense however is as a pick and pop player. We'll look at two examples of this play type to exhibit Harper's versatility as he is certainly capable of attacking off the dribble as much as he is burning teams from the outside. Interestingly enough though, he was rarely if ever utilized in this set at the college level. Of his total possessions this season, only 1.8% of them involved him as the roll man in a screen and roll set. 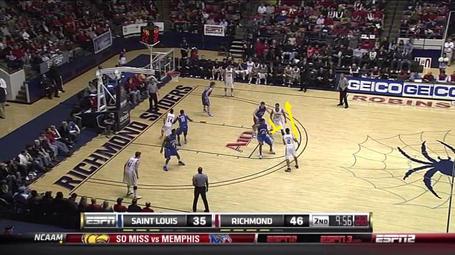 This first example begins with a simple screen for the ball handler just to the left of the top of they key. As Harper sets the screen his teammate dribbles to the right off of the pick. 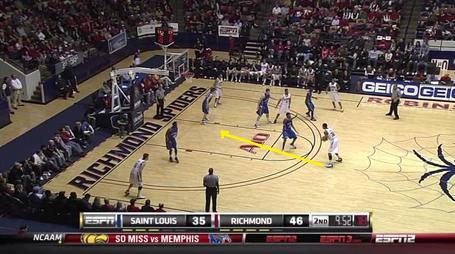 Harper opens up after setting the screen and is quickly hit with a pass that leaves him isolated at the top of the key. Showing his versatility and developed skill set for a big man, he attacks off the dribble, getting into the lane where he looks to score. While he may not have the necessary explosiveness or quickness to take anyone off the dribble, he's shown enough already that it's easy to see him beating a lot of frontcourt players on quick dribble drive plays of this nature. 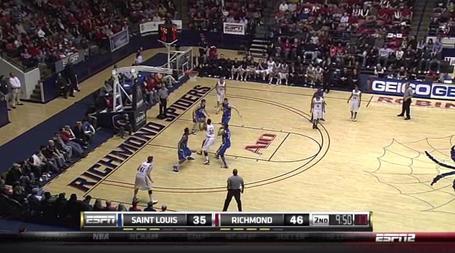 The play results with Harper getting to the rim amidst a collapsing defense and finishing over a pair of defenders.

The more common use for the face-up big man at the next level will likely be in the true pick and pop fashion, creating difficult covers for opposing defenses as a result of his ability to spread the floor. 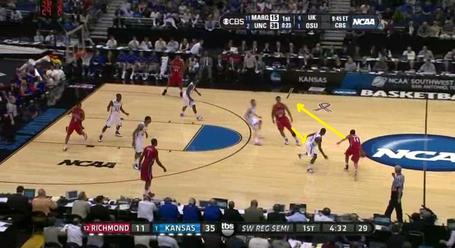 This is a basic play to set up and given Harper's ability to shoot with a high rate of success from almost anywhere on the floor, one that can be utilized in a variety of fashions. In this case, Harper is setting a high screen at the top of the key, a commonly practiced set in the NBA. 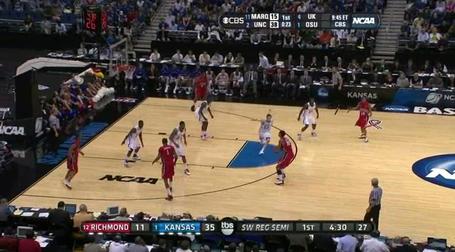 Harper opens up to the play, receives the pass and buries the uncontested three before the Kansas defense can recover. Stretch-fours are very much becoming en vogue in the NBA, making Harper an intriguing prospect come draft day. The biggest questions will center around two factors: his ability to operate inside against other bigs and his sustainability as an offensive weapon.

As impressive of a senior season as Harper managed to put together, there will still be some teams that will need to see him up close before they necessarily buy into the hype. This plays right into his strength as a big man with a fluid skill set, he is a classic workout player, the kind who will leave scouts imagining the possibilities in the future. At this point he already looks like a relatively safe bet to earn a guaranteed contract as a first-round selection, but with so many high profile players returning to college for another season, it isn't out of the question for him to climb higher. Depending on how his game and body further develop, we could be looking at one of the better players to come out this class long term.