Lost in the glow of Butler's tremendous two-year run in the Horizon League has been the emergence of Cleveland State's Norris Cole. The senior point guard has steadily improved in each of his four seasons and this past emerged as a star in the conference, scoring nearly 22 points per game while handing out more than five assists. Unquestionably he had a high usage rate, accounting for 32.2% of the Vikings total possessions, the 12th highest mark in the country.

Beyond existing as a one-man wrecking crew at the mid-major level, Cole is now considered by many a legitimate pro prospect with a chance to sneak into the second round of the NBA Draft. What separates him from so many other scoring guards at this level is the fact that Cole has repeatedly demonstrated his fully developed point guard skill set. He scores at such a high rate because his team needs him too, but is a point guard forced into this role, not a scorer trying to make the adjustment to facilitator as is so often the case.

As we'll see after the jump, Cole may have some concerns about how he projects out at the next level, but he presents just as much intrigue as far as the style of offense he is used to running and his fantastic intangibles profile.

The most immediate observation one can make about Cole's development is the remarkable jump in production he has made in the last three seasons despite seeing no change in playing time. With his minutes hovering between 33 and 35 minutes per game, Cole's scoring mark increased each season (13.3, 16.3, 21.7) as well as his assists totals (2.4, 4.4, 5.3) while only seeing a slight increase in turnovers over the same time frame. That's certainly enough to turn a few heads, as is a pure passer rating of 2.26 which rated better than Ben Hansbrough, Kenny Boynton, E'Twaun Moore and Kyrie Irving (though from a limited sample size).

What scouts like most however is the amount of time Cole spends operating in pick and roll sets, something that translates very well to the NBA. According to Synergy Sports, these plays accounted for nearly 35% of his total possessions during the season. Relative to the rest of the country, Cole proved a somewhat better scorer than passer out of this play type, but was effective in both regards, tending to look for his shot a bit more often. 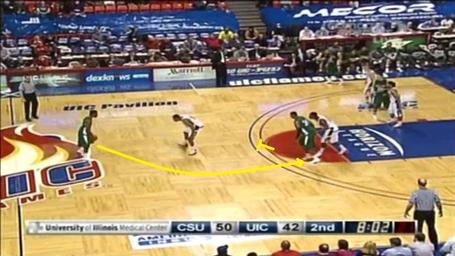 We'll start with an example where Cole looks to score out of the pick and roll, a play that over the course of the season yielded .924 points per possession on 41.7% shooting. What he lacks in blistering quickness he more than makes up for with excellent feel and the ability to change speeds with great success. In this set Cole starts at the top of the key extended while a teammate rotates up to set a screen while he dribbles off to the right. 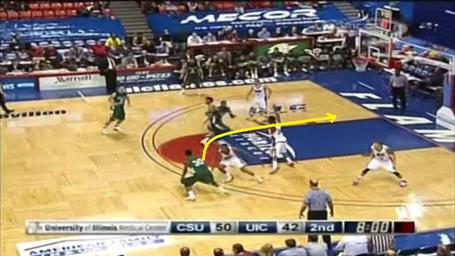 This is where Cole is dangerous when operating out of the pick and roll set is his ability to see the floor and read the defense. The initial screen wasn't particularly strong allowing the defender to stay with the ball. Recognizing this, Cole crosses over and quickly explodes into the lane. Again, he often looks faster than he actually is because of his ability to change speeds, arguably a more important characteristic of a guard than actual top speed. 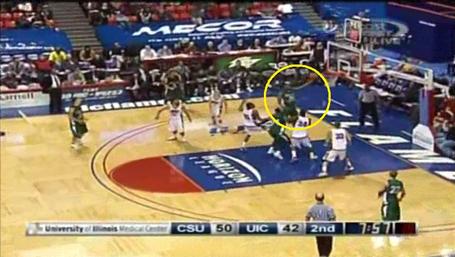 The end result is a finish at the rim by Cole, something he exceledat this season. Shots at the rim accounted for 31% of his total shots this year and the point guard shot a respectable 54.9% while producing better than 1.13 points per possession - a good mark for a guard with his degree of usage.

As a playmaker out of these sets Cole is good but still with some room for improvement. He excels at finding open shooters - particularly out of double teams - and would likely produce a higher scoring rate if he was surrounded by a stronger core of perimeter players. Where he does struggle is when finding the screener once he has separated from the play. Cole turned the ball over more than 17% of the time this season when looking to distrubte to the role man, something he'll have to clean up at the next level. Let's look at an example of this play that finishes with a positive note though, just to show the tremendous feel that he has running this kind of set. 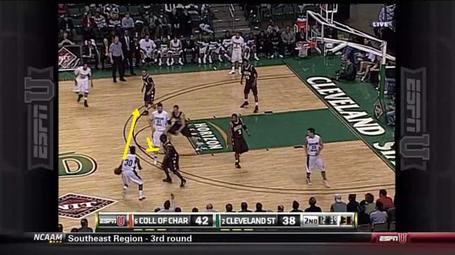 This time Cole starts on the right side of the arc as the screen comes, he dribbles off to the left. Notice his head is up and scanning the court, this is characteristic of the senior who is constantly keeping his eyes active, looking for seems and openings in the defense. This translates into the transition game as well which we'll see later. 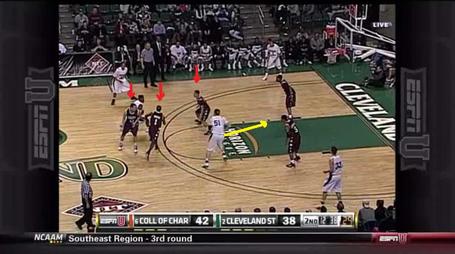 As Cole separates from the screen, he draws the attention of three defenders as we can see above. His teammate makes the right read and cuts down a suddenly open middle part of the lane, as the two remaining defenders are stuck in between guarding the basket and worrying about the two additional shooters spotting up in the corners. 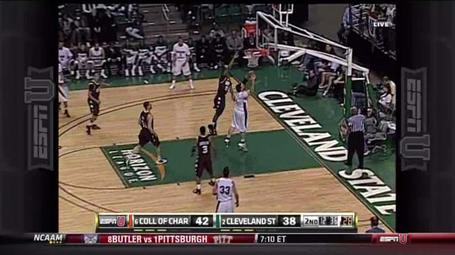 The play concludes with Cole making a great read and an even better pass to an open teammate inside for a contested, but relatively easy basket. Again, the results here have been mixed, but overall it's a major positive that the senior has managed to significantly increase his assist rate while limiting his total number of turnovers. His advanced understanding of how to score and distribute out of the pick and roll will be paramount to his translation to the pro game.

As a shooter Cole has made marginal improvements over the course of his career. As a senior he shot 34% from beyond the arc on a career-high 4.1 attempts per game - still though there is room for growth. What scouts will like is the relatively even degree of success he has shown as a spot-up shooter and operating off the dribble. He can be somewhat streaky regarding his release, but long term it does appear as though he has the proper mechanics and diversity in scoring ability that he can become a consistent shooter capable of doing some damage when left alone.

The transition game is the other facet of the game that Cole thrives in the most. These possessions account for nearly 22% of his total touches, with him scoring efficiency checking in at 1.18 points per possession on 57.4% shooting from the floor. His excellent court vision and previously mentioned ability to change speeds at a rapid rate make him a difficult cover in the open floor. It should be noted as well, that one our of every four touches in transition result in a pass from Cole, producing nearly 1.5 points per possession when he does. 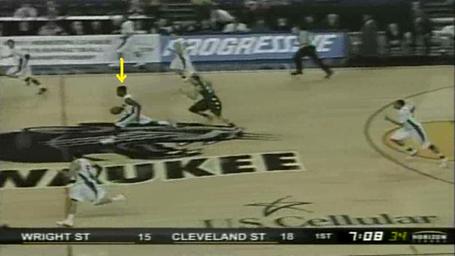 We'll pick up the set withCole just about to cross half court in a full sprint with the basketball in a conference tournament meeting with Wright State. As we've pointed out on several occasions already, notice how his head is up and the eyes are analyzing the retreating defense in front of him. 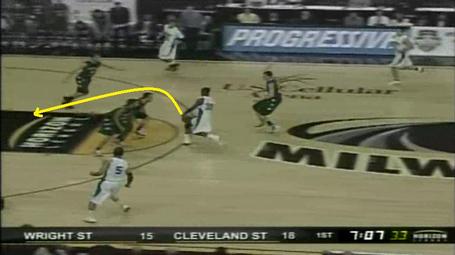 As he breaks the arc at the top of the key the defense starts to collapse in, but recognizing this, Cole changes direction and accelerates into the lane as his seem closes. 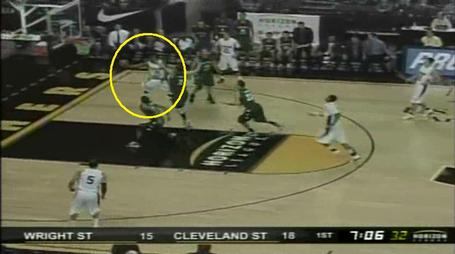 Again the end result is a finish at the rim for two points. Chances are at the NBA level Cole will not be a primary option when running the break, but these types of plays do exemplify his ability to see the floor when on the move and capitalize on weaknesses in the defense when present.

As a defender Cole displays great effort, good footwork and above average lateral quickness, all of which make him a solid presence at this end of the floor on the college level. As far as covering NBA caliber guards there are certainly question marks give the relatively easy schedule Cleveland State plays, particularly in the non-conference, but he seems to have a strong enough understanding of how to play angles to make up for his lack of elite quickness. Against faster guards he also has the luxury of using his surprising strength to body up when possible.

Ultimately Cole is fringe prospect, one who will need to convince pro scouts and GMsthat he is capable of performing against NBA point guards - something he hasn't had much of an opportunity to do in college. Not participating in the Portsmouth Invitational was a poor decision as this would have been the perfect platform in which to show his ability and skill set against quality opponents in front of representatives from every NBA team. Now he'll have to really impress during individual workouts if he hopes to hear his name called on draft night, or earn an opportunity to play in the summer league or training camp. There's no question though, based on what we've seen thus far, Cole has the ability and the intangibles to be a nice back-up points guard in the NBA if given a chance.