Vermont continued it's run of success in the America East Conference in 2011, winning its sixth regular season championship since 2002 and second in the last three years. Though their March run ended in quick fashion with an opening round loss to Cleveland State in the NIT, the Catamounts undoubtedly have to feel good about a seventh postseason appearance in the last ten years.

The future looks bright in the Green Mountain State for continued conference success, particularly when you consider the relative youth of the roster. In their lone NIT game, Vermont marched out a starting five of entirely freshmen and sophomores, which while a byproduct of injuries to upperclassmen, did provide valuable experience on a big stage for returning players. The biggest question mark surrounding the team presently is whether or not head coach Mike Lonergan will be in Burlington when the next season begins. After assembling four 20-win seasons in the last six, the Catamounts head man is on the short list of names for the current openings at George Mason and George Washington. This situation could be entirely resolved in the upcoming days, but for the time being fans will wait anxiously for an outcome.

Regardless of who is running things from the bench, let's take a look at how Vermont will shape up for next season.

For the time being it's Lonergan's status as head coach. We'll update things when a final decision is made.

*Update: Lonergan has been hired as head coach at George Washington, replacing Karl Hobbs. We'll have more updates on the coaching search for the Catamounts.

The Catamounts do take some hits as a result of graduation, losing their top two scorers in Evan Fjeld and Joey Accaoui. Fjeld was a First-Team All-America East selection after averaging 14.5 points and 6.3 rebounds per game while serving as the backbone of the team. Accaoui was one of the more accomplished perimeter shooters on the team (which isn't saying much for this team), doing the bulk of his damage in spot-up and isolation sets during the season. Vermont also loses senior big man Garrett Kissel (3 ppg, 3 rpg) and sophomore guard Simeon Marsalis who announced he was leaving the team shortly after the season came to an end. Outside of those four, we're talking about a young team with a plethora of questions to be sure, but certainly a significant degree of upside for fans to be excited about. 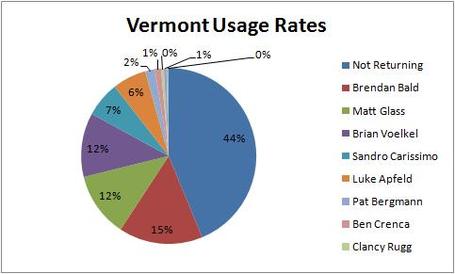 As we can see, as far as who is handling the basketball, the Catamounts lose nearly half of their total usage rate. With that said, there is a nice balance overall among those player who will be suiting up this fall. Brendan Bald was second overall on the team in usage rate last season and can expect a bump up in his touches in 2012, especially after pacing the team as its top three-point shooter. The same can be said for freshman standout Brian Voelkel who earned conference rookie of the year honors.

Vermont's offense was built first and foremost around spot-up sets which accounted for more than 20% of the team's offense - don't expect that to change next year, in fact in order for this team to achieve success, it can't. The Catamounts were only an average jump shooting team according to Synergy Sports Technology, but proved to be above average from the outside when utilizing the points per possession metric (1.054), which ranked in the 62nd percentile nationally. Where the tended to struggle and will undoubtedly have to make improvements is shooting from mid-range where UVM was unable to break 30% from the floor, an abysmal mark that left them in the bottom one-fifth of all Division 1 teams. Bald was the most heavily used player in these sets and had a well above average efficiency rating, but guard Sandro Carissimo easily presents the most intrigue. The freshman will likely be the teams top option at point guard next season, though he hardly proved a dynamic facilitator on offense in his first season at the college level. At least for the time being, he appears more a combo-guard making the transition to being a pure passer, so don't be surprised to see him looking for his shot out of spot-up sets where he scored 1.15 points per possession, good enough to land him in the 15% in the country. Granted, these numbers are taken from a limited sample size, but there is promise nonetheless for the returning underclassman. Matt Glass shot the ball very well in the first half of the season (remember his 24-point effort against Connecticut), while incoming recruits Four McGlynn and Chris Santo are noted shooters as well. In all, UVM ranked in the top one-third nationally in three-point shooting this past season despite taking by far the fewest shots from the outside of any America East team. An influx of new shooters, coupled with an increased usage rate for the returners could help spread the floor out for other facets of the offense as we'll see.

From there, expect things to change somewhat from an offensive standpoint in Vermont. Post-ups and off the ball cuts were the next two most prevalent sets in the Catamount offense, but with Fjeld and Kissell both gone, the team's top scoring options out of these play types are no longer on the roster. Given the immense success Voelkel has as an isolation scorer it's a safe bet we'll see more sets to get him the basketball on one side of the floor where he can and outwork defenders. Again, one season isn't worth setting the sites too high, but while accounting for 21% of Vermont's iso possessions, the 6-foot-6 freshman ranked in the 98th percentile nationally in scoring efficiency. It's a mark that ranks higher than players like Charles Jenkins and Kemba Walker - again different competition levels and a smaller usage rate - but worth noting at least for perspective. Equally as promising, he ranked just a highly in producing offense for others when drawing and kicking out of isolation play types.

Voelkel and fellow freshman Luke Apfeld should help the Catamounts maintain their prowess on the offensive glass where they ranked 21st nationally in offensive rebound rate according to data from Ken Pomeroy. Both had offensive rebound rates of nearly 11%, not overly dominating, but certainly enough to make a significant in conference play.

For visual purposes lets take a look at an example of Voelkel in an isolation set from this past season simply because he has the potential to serve as Vermont's most dangerous and versatile offensive weapon. 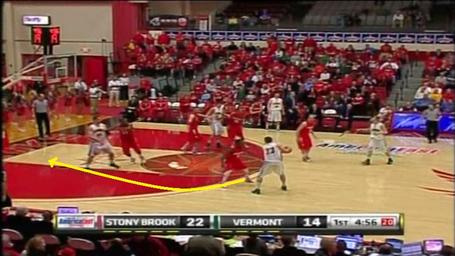 In this example from the America East Tournament semi-finals we'll look at Voelkel's ability as a playmaker. In this instance he isolates with the ball just to the left of the top of the key and quickly beats his man off the dribble and he attacks the lane. Even as a freshman, he has the size to get into the lane and finish with some contact, though undoubtedly he will improve in this regard as he goes through natural physical growth. 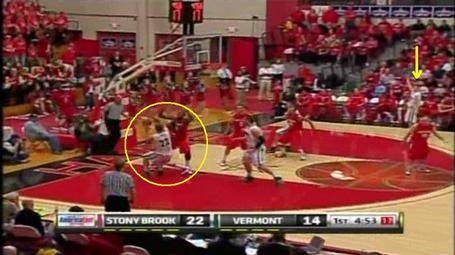 As he reaches the near side block, help comes from an additional defender, resulting in a double of the basketball and forcing Voelkel to pick up his dribble. This is certainly a freshman mistake as there is plenty of room for him to maintain and back out towards the corner or wing to reset the play, but more importantly he doesn't panic. With his size, when operating as a distributor he has the luxury of being able to see over many defenders which is the case here as he spots Brendan Bald spotting up wide open on the opposite wing. 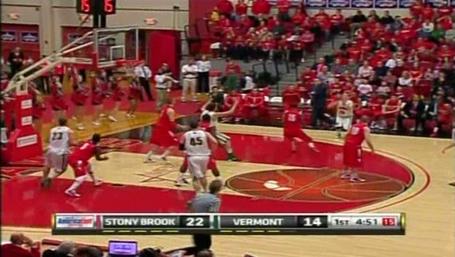 The ball is delivered and Bald connects on the open look from the perimeter. Additionally we can see Voelkel sliding into position to fight for an offensive rebound. Certainly having a drive and kick player who can hit the glass hard is a nice luxury to have.

In spite of all of that offensive breakdown we just went through, the Catamounts calling card will be defense once again this season. Vermont had the top defensive efficiency in the America East last season, while also leading the conference in opponent offensive rebound rate, three-point field goal percentage against and two-point field goal percentage against. Bald returns as the reigning conference defensive player of the year, with Voelkel excelling at this end of the floor as well, allowing just .58 points per possession, easily the lowest mark on the team. Questions will center on the team's interior defense, which was one of the most efficient in the country last season but lost its top defenders in Fjeld and Kissel. The only returning player who defended at least 10% of post-up plays for UVM is Matt Glass who struggled in this regard.

There's plenty of potential in Burlington right now, but just as many questions. The Catamounts will be young but fairly long on experience, a factor that should manifest itself as the season progresses. There perimeter game seems to be in good hands with several weapons capable of doing damage on any given night, but developing a consistent rotation in the frontcourt will go a long way to ensuring another 20-win season and another run at a conference championship.