Note: This preview posted was originally posted on April 27th, head coach Pat Chambers has since departed for the head coaching position at Penn State.

Regardless of how things play out from this point, Pat Chambers can at least know that no head coach has had a better two-year start at Boston University. The Terriers have posted back-to-back 21-win seasons, qualified for a postseason tournament in both years, won an America East Tournament championship, earned a berth in the NCAA Tournament for the first time since 2002 and gave Kansas a run for about 30 minutes or so this past March.

What's more, BU returns all but one player to their roster next season, that player just happens to be leading scorer and rebounder John Holland who capped off a brilliant career averaging 19 points and nearly six rebounds. This is undoubtedly a major blow to the Terriers, but with the continued development of several promising underclassmen and a wealth of experience, this is a void that could ultimately be filled by the postseason.

Who becomes the teams top scoring option? Darryl Partin is the leading candidate as the top returning scorer, but there are inevitably going to be concerns about the go-to player being a trigger happy shooter who is only modest from the perimeter. D.J. Irving has the making of a star in this conference, but is it too soon for the sophomore to take the reigns for Boston? The offense could just as easily be run by committee, but chances are we'll know by the time the conference schedule rolls around.

We already mentioned the graduation of John Holland. You don't replace a conference player of the year and an honorable mention All-American, you just do your best to fill that void. The silver lining in all of this is of course is this is the only loss the team has to deal with, returning the rest of the roster. 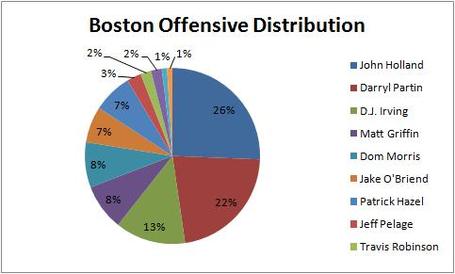 The easiest assumption to make about usage rates for the Terries next season will be a significant increase in touches for D.J. Irving who was responsible for just 13% of the teams possessions last year according to Synergy Sports. While it's certainly possible that Partin could see a slight increase from his usage rate as well, chances are many of the possessions that went to Holland in the past will be spread out amongst Griffin, Morris and O'Brien.

Boston's offense was good, but not great during the regular season, ranking in the top half of all Division 1 teams scoring .865 points per possession. This was very much a jump shooting team last season, with nearly two-third of the teams total shots coming in this fashion and one-fourth of all possessions manifesting from spot-up sets. Partin easily has the highest usage rate of any returning player in this play-type, accounting for 26% of the team's spot-up possessions, shooting a respectable 38% overall. The player that presents the most intrigue here for next season however is Matt Griffin. The junior guard saw more on than one-third of his touches out of this set and ranked in the 88th percentile nationally at over 1.16 points per possession. Generally a higher usage rate means a player will regress towards the mean, but even a marginal decrease in production here with more touches will be immensely beneficial to the Terriers.

Isolation sets is where Boston really has a chance to be dangerous this season thanks to Irving's presence on the floor. With a nearly 23% usage rate in this play type last season the freshman scored 1.10 points per possession on an impressive 53% field goal percentage, a mark that left him in the 93rd percentile nationally. Others have said this before, but Irving has the kind of ability to be a star in the America East, as he further develops, there's no reason to think he can't be a massive usage rate kind of player, capable of scoring at will while also distributing freely to teammates. Where he shows even more potential is out of the pick and roll, a facet of his game that was heavily relied on by the Terriers this season, but that still has room for development from the underclassman. Let's take a look at a couple of examples just to better spotlight his potential. 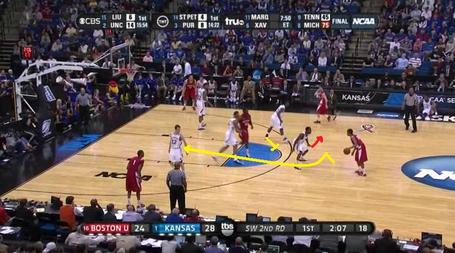 Both examples are taken from BU's NCAA Tournament game with top-seeded Kansas, a game in which Irving netted a respectable 11 points on the biggest stage of his career. In this set he starts at the top of the key as a teammate flashes up to set a screen on the right side. This is where Irving is most intriguing, beyond his quickness he displays a fairly advanced basketball IQ for his age as well. As the defender starts to cheat towards the right as he feels the screen coming, Irving sets him up with a quick jab in that direction before cutting back to the left and blowing down the lane. 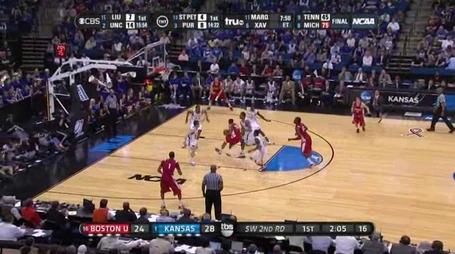 Irving knifes his way through the lane and finished a difficult shot over a slew of Kansas defenders. Two numbers of note for this scenario, Irving is among the most efficient scorers in the country when he dribbles away from the screen as he did here (1.294 ppp) and is a good finisher at the rim for a player of his size, converting over 54% of his shot attempts.

Obviously with the kind of speed he possesses, Irving is capable of applying a lot of pressure on opposing defenses, especially when he gets into the lane. He led the team with nearly four assists per game this past season and could significantly increase that total this season. 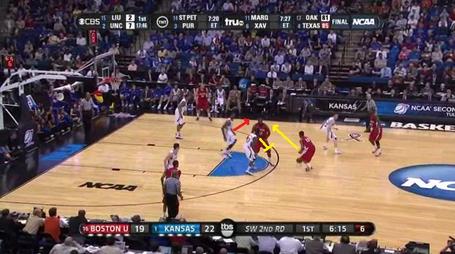 Let's take another look at an example from the Kansas game - a match-up that far exceeds any Boston typically sees during the conference schedule. Again, Irving is at the top of the key and receives a screen from the right, one that he dribbles off of. Marcus Morris, the screeners defender, hedges out on the play to cut off an penetration. 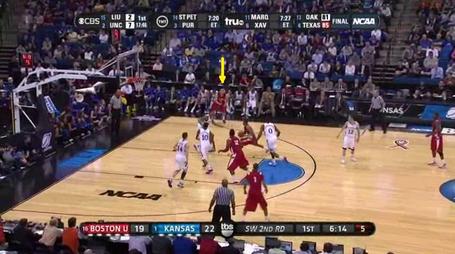 As athletic as Morris is, he can't stay in front of Irving who quickly turns the corner and gets into the teeth of the defense, forcing a collapse. This of course leaves a teammate wide open in the corner for an easy look from the outside. 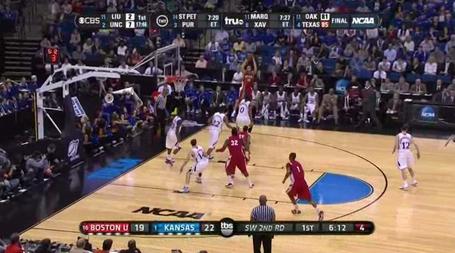 Irving delivers the pass on the nose and the result is a three-pointer. Yes, these are just two examples and a limited sample size but they give a clear indication of what the future could hold for this talented guard.

The froncourt presents plenty of questions, particularly at the offensive end. The trio of players who saw the most touches on the block in Patrick Hazel, Jeff Pelage and Dom Morris were all mediocre finishers inside, with all three ranking in the bottom one-third nationally in low post scoring efficiency. Morris certainly has the size to be a force inside but spent a lot of time away from the paint last season, while Hazel is known more for his defense at this point. One major positive that we can say with no hesitation however is how good the Terriers are at getting to the line, ranking first in the America East in free throw attempts per field goal attempts.

Relatively speaking, BU was a better defensive team than they were offensively, ranking in the top 25% nationally in efficiency at this end of the floor. The Terriers held conference opponents to less than 43% shooting on two-point field goals and under 33% from beyond the arc, both marks that ranked third amongst AE teams. The good news is that general success the roster has at defending a variety of play-types, proving well above average across the board save for pick and roll sets. Again, Hazel is a stout defender as is Darryl Partin who limited opposing players to just 33% shooting last season.Irving, for all of his quickness was only an average defensive presence last season, but has all the physical tools to be a ball hawk as his career progresses.

There may be those who aren't penciling in the Terriers as one of the favorites in the America East next season as a result of Holland's departure. While this is certainly understandable, BU has enough returning talent and experience that another NCAA Tournament auto-bid is certainly not out of the question. Chances are it may be a slow start to the 2011-12 season, but things could end with a flourish if the pieces all fit together.