Will Brown's tenure as the head coach of the Albany Great Danes has been a roller coaster experience, complete with nearly as many sub-10 win seasons as there have been 15-win seasons. This stretch peaked in 2006 and 2007 when Albany had back-to-back 20-win seasons a two straight conference championships.

After stumbling terribly two seasons ago, the Great Danes look to be back on the up swing, finishing in fourth last season and returning a strong nucleus of upperclassmen. An intriguing recruiting class will help bolster the lineup as well, particularly following the loss of all-conference selection Tim Ambrose. It's very likely this team is still a year away from being a real threat to contend for an America East title again, but with Brown's contract down to its final year, maybe that will be enough fire to have this team ready to win it all a year in advance.

This one could be up for debate, but based on the early chatter the arrival of junior college transfer Gerardo Suero has to be one of the early plots to watch intently if you're an Albany fan. Former standout Jamar Wilson has reportedly had nothing but high praise for the Domincan Republic born shooting guard and though his recruiting history is somewhat shadowed, names like UCLA and Memphis popped up repeatedly while he was still in high school. Should Suero live up to the hype, he could be an instant star.

Really it comes down to Tim Ambrose (Russell Moore's five games don't really count, even with all of that potential), who capped off his career with a first-team All-America East selection while leading the team in scoring, assists and proved to be the most dangerous three-point threat. It's never easy to replace a player of this caliber, but the Great Danes have enough experience returning that they should be able to withstand the loss and adjust. 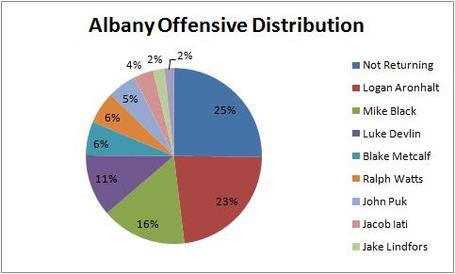 As we can see Logan Aronhalt, Mike Black and Luke Devlin accounted for nearly 50% of the team's possessions last season and nearly two-thirds of what is coming back. Plenty can happen over the course of a season, but based on how things played out last season, Black probably stands to see the biggest jump in usage rate in the upcoming year. His play was inconsistent, yes he dealt with injury, but there are plenty of flashes of ability that could lead to the diminutive guard emerging as a top flight backcourt player in the conference.

The easiest way to classify Albany's offense last season was the closer they moved to the basket, the more their efficiency suffered. The Great Danes were the top three-point shooting team in the conference at nearly 39% against America East foes. The loss of Ambrose hurts in this regard, but both Aronhalt and Black proved to be strong perimeter threats as well (Black actually had the best percentage on the team). Aronhalt has the potential to be a tremendous factor in the conference if he can sustain his success over the course of an entire schedule as opposed to just 12-15 games. Remember, there was a week-long stretch in November when he topped 25 points three times, only to tail off once conference play started. Again though, as the team moves in from the arc, things start to digress drastically. While Albany ranked in the 82nd percentile nationally in scoring efficiency on three-point attempts, they were barely in the top 50% in mid-range jumpers and were among the worst teams in the country on shot attempts inside of 17 feet at just 27% shooting. This trend continues in the low post where the Great Danes shot only 38%, again in the bottom one-fifth in all of Division 1.

Albany did show a tendency to run their shooters off of screens fairly often last season (10% of total possessions), with Aronhalt accounting for nearly 40% of all shot attempts off these sets. That number could go up even higher next season, so let's take a look at an example of how the Great Danes utilize this set to get the ball into his hands. 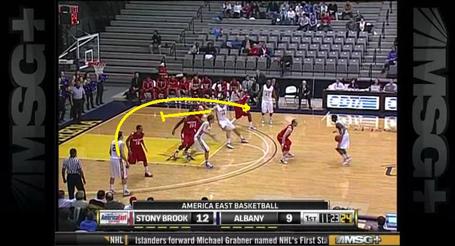 Aronhalt starts on the left wing with the ball at the top of the key and both big men flashing to the high post. As the ball is entered to the left elbow, Aronhalt rotates underneath the play along the baseline and runs his man right into a screen being set by the other big who was setting up at the right elbow as a decoy. 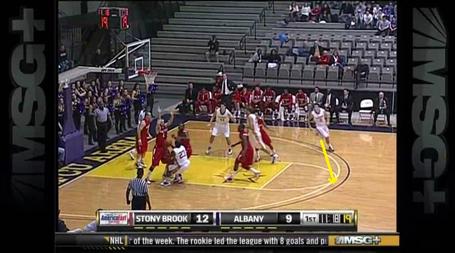 The ball is quickly handed back to the cutter who was initially operating at the top of the key (in this case Ambrose), and as the defense collapses in, Aronhalt continues to rotate behind the ball to the top of the arc separated from his man. Now this happens to be one variation of this set, as in other instances the ball stays with the high-post man who in turn kicks out to Aronhalt himself, but Ambrose made the read that he had a lane to the basket. 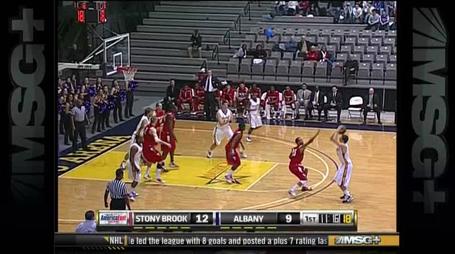 Ambrose makes a nice read here, turns and kicks to Aronhalt who connects on the three-pointer, despite a nice recovery from the Stony Brook defense. Again, Aronhalt was the team's top option coming off of screens last season, shooting over 40% with an adjusted field goal percentage of nearly 52%, which speaks to how often these kinds of sets were utilized with him on the perimeter.

Outside of Black and Aronhalt - the teams most efficient options in spot-up sets returning to the roster - Ralph Watts presents the most intrigue following his solid efforts filling in for Black last season. While his place in the rotation is up in the air, there's little question having a player who can deliver in short spurts like the returning freshman can is going to be of great value. The New York native was the teams most efficient offensive weapon in isolation and pick and roll sets, granted in a limited sample size, but the marks were impressive regardless. Watts ranked in the 93rd percentile out of the pick and roll and was even better in iso play-types, ranking in the top 2% in the country when incorporating drive and kick scenarios in addition to shot attempts.

Inside, things are somewhat mixed. Freshman forward Luke Devlin was a nice surprise in his first season, leading the team in rebounding and finishing fourth in scoring despite not possessing much athleticism or quickness. Once he adjusted, he became a very solid contributor on the floor, including recording three double-doubles in his final four games of the season. Center John Puk - another freshman - shows some potential given his length and ability to alter shots in the lane. The Great Danes will need those two and sophomore center Blake Metcalf to hit the glass hard next season as Albany was second in the conference in offensive rebound percentage (36.9).

Defense was crucial to this team a year ago and it will be the same story during the 2011-12 season. Albany didn't force a lot of turnovers (9th in the conference) but rather contested shots often, ranking second in the America East in opponent two-point field goal percentage. Interestingly enough, in terms of usage coupled with efficiency, Puk is the team's top returning defender, accounting for 11% of defended plays last season and limiting opponents to .72 points per possession on 32% shooting overall. Watts and Jacob Iati have the top efficiency marks for any returning perimeter players, though with a limited sample size in terms of plays defended. If both can manage to avoid a significant regression with an increase in usage rates, Albany will be a very tough team to score against.

Top to bottom its certainly easy to argue the Great Danes have the strongest roster in the conference next season, especially with the potential in their recruiting class. Even though they will be relatively young in class standing, Albany will be ahead of the curve in experience. Again, a conference title may be a year away, but this team will be in the mix down the stretch.