A dynamic guard with seemingly limitless range, Charleston's Andrew Goudelock is the latest mid-major scoring machine hoping to translate his offensive exploits to an NBA contract. Every college fan from small school X likes to think their programs star has what it takes to excel at the next level just because he was able to score 20 points a night, but the reality is so much more is considered by pro scouts.

Players like Goudelock are judged based on their efficiency, their skill sets, if they can exist as something other than a primary scoring option and actually facilitate offense for others rather than look for their shot. Even if all of these criteria are met, unless we're talking about an absolutely prolific offensive player, these prospects need to be able to defend their position at the next level. Yes, Goudelock can hang 39 points on Dayton (no small effort by the way), but can he cover Chris Paul? It may sound like a ridiculous question, but the reality is as a likely back-up point guard, the Charleston gunner will be asked to cover players of this ilk.

Luckily for Goudelock, he has shown throughout his senior season - and more importantly at the Portsmouth Invitational - that he has the necessary ability to translate to the NBA be it as a second round selection or free agent.

Physically Goudelock isn't going to blow anyone away. He frame is fine for the point guard position, but he lacks above average athleticism or quickness, instead relying on his smarts and craftiness to operate off the dribble as we'll see.

His game is built around his deadly jumper which makes up over 77% of his shot attempts according to Synergy Sports. What sets Goudelock apart from a lot of pro prospects already though is the comfort level he shots catching and shooting as well as shooting off the dribble, connecting on 43% of his attempts in each scenario which puts him among the nation's elite in scoring efficiency. This efficiency will carry over well to the NBA when the senior will need to adapt to being a non-primary scoring option, expected to pass first rather than look for his shot.

Charleston utilized their star most frequently out of the pick and roll set, which makes sense given his lack of blow by speed, as this play type provided him the space needed to get his shot off. This also provided scouts an opportunity to see how he operates in a commonly used set for pro point guards. Not surprisingly he looked to shoot more than 60% of the time when running this set in college, but during the Portsmouth Invitational Goudelock was much more prone to facilitate and set up other teammates first. Let's look at examples of both. 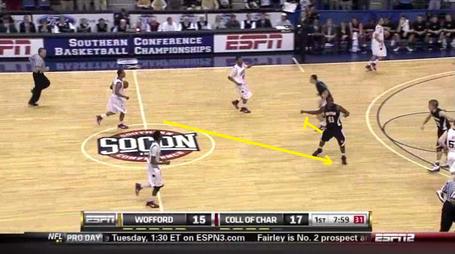 We'll pick up the action with Goudelock acting as the primary ball handler on the play. As he crosses over half court his teammate swings around to set a screen to the defenders right. 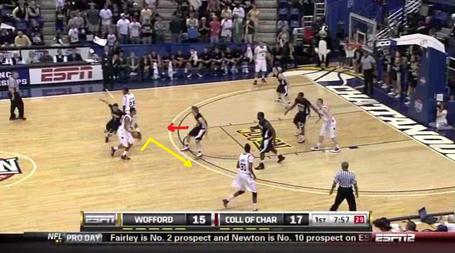 As Goudelock drives off the screen a help defender flashes up to the ball, recognizing this the senior uses a simple inside out dribble before cutting to the right wing. Again, this is where Goudelock flashes both a strength and weakness, as many elite level point guards would rely on quickness to blow into the lane. Simply put, he doesn't have the kind of quickness that is going to allow him to consistently turn the corner against defenders coming off screens at the next level. Still, the senior exhibits solid control as he frees himself on the perimeter. 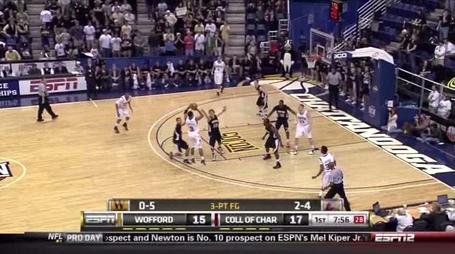 The result isn't necessarily the highest percentage shot (though he does hit the three), but rather to show how quickly Goudelock can get his shot off and what little space he needs. This is probably the fashion that he will most often be utilized as a scorer in the NBA, looking for opportunities around the perimeter, likely as a spot-up threat. Few players in this draft class can attest to having the kind of range that he brings to the table, meaning teams will at least have to respect him enough to spread the floor a little when he's on the court.

As a passer out of these sets Goudelock shows pretty strong instincts in general, recognizing double teams well and displaying a good sense of where teammates are on the floor. Again, Portsmouth was the first time we really got to see him in a setting where he didn't have to be the primary scoring option (though he still proved to be), looking to defer to teammates early. 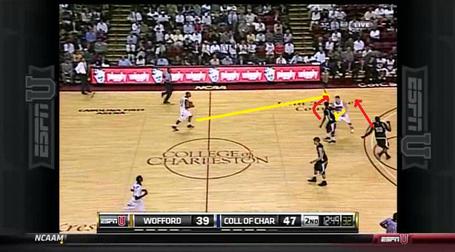 We'll look at another pick and roll set, again with the screen coming near the top of the key, this time freeing Goudelock driving left. The defense does a good job of recognizing the pressure coming, as the screeners defender cheats out wide on the hedge and Goudelock's man able to fight his way over the top of screen as it is set a bit too early. 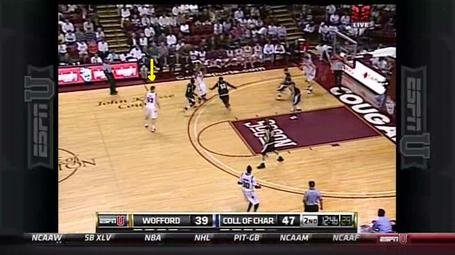 As the double team comes, the screener spots up behind the play and Goudelock recognizes the open man as a result of the defensive pressure. During the season when he did opt to pass out of the pick and roll, nearly 54% of the time it was to the screener, which also happened to be the most efficient option for Goudelock, with this play resulting in a solid 1.045 points per possession. One number teams will undoubtedly be pleased with is the very low 3.6% turnover rate he shows out of these sets when opting to pass, as he rarely makes a mistake when delivering the ball on the move. 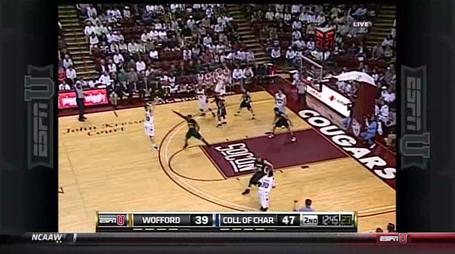 The play culminates with the screener receiving the pass and connecting on the open look from the top of the key. This is the kind of play that we could see Goudelock running frequently at the pro level, particularly if he lands on a roster with a face-up power forward who feels comfortable shooting from 18 feet.

Goudelock operated almost as frequently in isolation during his senior season (about one-fourth of the time), where he was one of the most efficient scorers in the country, ranking in the 93rd percentile overall. In fact, he only rated higher as a spot-up scorer where he landed in the top 3% nationally. He tends to put the ball on the deck when he can isolate, mixing between driving all the way to the rim and pulling up off the dribble. Again, he doesn't finish his drives nearly as often as he opts for a mid-range jumper, but Goudelock will mix in the runner when he can, a shot he hits about 45% of the time. 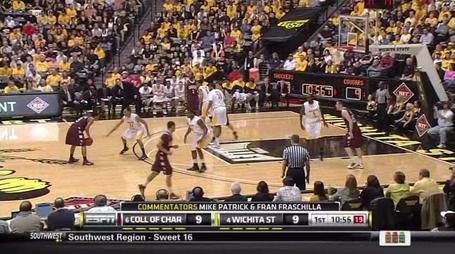 In this example Goudelock isolates his defender at the top of the key, which he does about 60% of the time as opposed to the two wings. He shows the ability to attack with either hand, though tends to favor driving to the left a little more frequently than to the right. 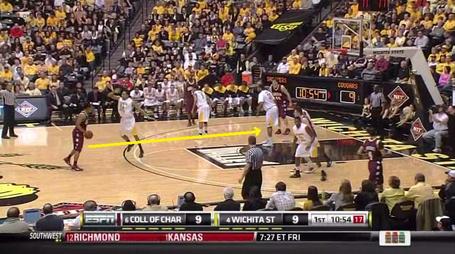 Again, lacking an elite first step, Goudelock has to rely on head and ball fakes to create space, which he does so with a quick pump fake here to get the defender in the air. 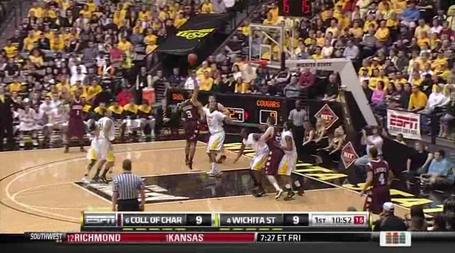 Once in the lane, Goudelock launches a floater over the closing defense for an easy two.

Again, the biggest question concerning the Charleston product isn't his scoring ability, but rather can he execute efficiently with fewer chances while creating offense for others. The early returns and advanced numbers seem to indicate that this is a role that Goudelock can play at the NBA level in a rotational position.

Defensively there will be some concerns as he lacks great lateral quickness and proves to be a liability at this end of the floor when he isn't 100 percent dialed in to his assignment. Reports from Portsmouth indicate he had some trouble fighting through screens and staying with his man consistently. Still, there are those who have entered the NBA with similar profiles as Goudelock and through sheer effort have improved their defense and become serviceable players in the pro game. While he may ultimately be a long shot to get drafted, he stands a good chance of getting a look during the summer league or training camp if he continues his solid play during individual workouts.