In defeating VCU 70-62 in the national semifinals yesterday, the Butler Bulldogs played the exact game they wanted to. Shelvin Mack will be remembered in the long term for his 24-point performance, just the latest big game he has produced in this tournament, but undoubtedly defense was the deciding factor. The Rams face paced offensive attack which hadn't been solved in five previous games, was limited to 68 total possessions, but more importantly held without a single fastbreak point  - a tremendous accomplishment.

Giving Brad Stevens a week to prepare for a game is always dangerous as the Bulldogs head coach is a master of breaking down opposing teams and scheming against them. In yesterday's game it wasn't so much that Butler pressured the ball excessively and forced turnovers, rather they avoided getting sucked into the lane by the Rams dribble drive game which has proven so troublesome for opposing teams.

Follow after the jump for a breakdown of how Butler managed to avoid giving up open looks from the perimeter.

Point guard Joey Rodriguez had been the primary catalyst of the VCU offense, continuously creating open scoring chances for his teammates by getting into the lane off the dribble be it from spot-up sets, off the pick and roll or in transition. The key is that when doing this, Rodriguez forced the defense to collapse into the lane leaving one, sometimes two options open from beyond the arc for easy spot-up looks. Yes, the Rams had been shooting a red hot 43% from the outside, but they were getting wide open opportunities on the majority of their attempts. Butler counteracted this by providing less help defense and putting the onus on the man covering the ball handler to make a play. This resulted in some easy looks around the rim for the Rams - the Bulldogs lucked out in that they missed many of these - but also took away the kick out option in many instances, limiting VCU to a modest 8-of-22 effort from beyond the arc.

Let's start with a transition example. 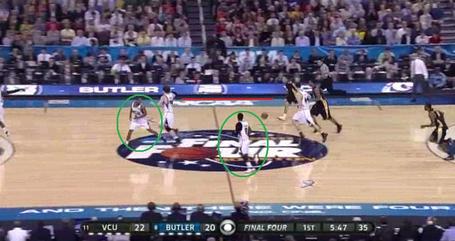 As we can see Joey Rodriguez is looking to push the ball up the far sideline as the Butler defense is retreating. Typically players are taught to sprint to the paint area and then play out in order to prevent easy lay ups in transition, the Bulldogs however didn't adhere to this practice in many of the fast break settings that this game presented. As the ball is pushed across mid-court, Shawn Vanzant and Ronald Nored are already scanning the floor behind them to identify where potential shooters may be coming from in an effort to mark up in man-to-man pressure. 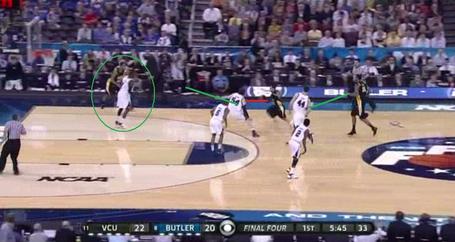 As Rodriguez prepares to break the three-point line and make a straight line for the basket, Butler is in perfect position to minimize the number of options the VCU guard has once in the lane. Bradford Burgess is spotting up in the corner but Shelvin Mack is there to take away that kick out option, or at the very least prevent a wide open look from the corner. Andrew Smith and Vanzant are near the top of the key to deter the bailout pass option to a trailer. Matt Howard is sliding into position to cut off the straight line drive from Rodriguez and just in case he can't force him wide enough to make him reset the offense, Nored is dropping back into the lane to provide help defense with the perimeter looking clear. 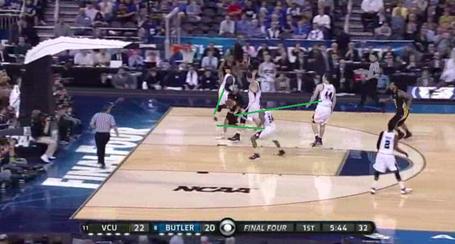 The end result with all of his passing options either cut off or non-existent is a tough shot in the lane from Rodriguez that he ultimately misses. The Bulldogs do a good job of realizing the outside is clear and crash the glass with three players in the immediate area surrounding the rim and Smith crashing down from the wing as well to provide additional bodies in the lane.

In our next example, the Bulldogs follow this same concept just in a half court setting where the play develops out of a spot-up set. 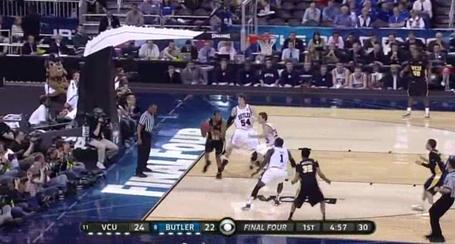 We pick the play up with the ball on the baseline and a pair of Butler defenders flying to the basketball. Both Rodriguez and Brandon Rozzell are on the ball side perimeter with the former already spotting up ready to catch and fire. Shelvin Mack is the lone Bulldog defender on the perimeter in position to make a play on the ball and we can see he is already starting to slide out in that direction to at least force the ball to be put on the floor rather than allowing an open shot. 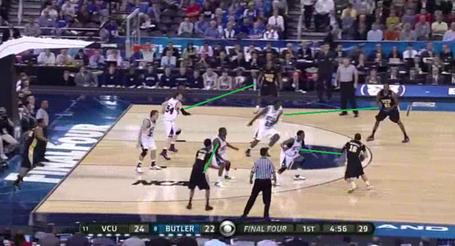 Nored who was not in frame in the first shot of this play recovers in time to force Rodriguez to drive rather than catch and shoot, while the rest of the Butler defenders slide into position to cut off possible drive and kick options with Smith remains in the paint with his man out of action at the moment of the drive. 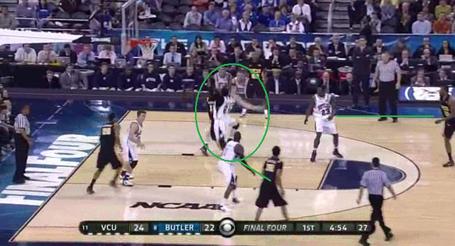 Once again, the Bulldog defense plays this one right as Rodriguez is forced into a tough shot between the trailing Vanzant (who gets the block on this particular play) and Howard who slides in at the last second to bring added pressure. Rozzell who is spotting up on the opposite wing - a good place to receive a kick out option - is covered by Mack who is taking away really the only passing lane the ball handler has at this point.

There's no question forcing players to stay in a one-on-one setting defensively can come back to burn teams on occasion, particularly when doing so against elite scoring guards like Butler's next opponent in Kemba Walker. There are also going to be times where not all passing lanes are eliminated as VCU started this game hitting three straight three's in the opening minutes - the Bulldogs just made the necessary adjustments following that hot start to avoid another torrid effort from the Rams. Connecticut isn't the same kind of shooting team VCU is, so Butler will undoubtedly have to take a different approach defensively in tomorrow night's national championship game.