Share All sharing options for: National Championship Preview: How Butler And Connecticut Score

Yes, at its core this is undoubtedly the most unlikely national championship pairing we've ever seen. Eighth-seeded Butler led by wonderkid Brad Stevens is making its impossible to comprehend return trip and has a chance to tie the historic record of lowest seed to ever win it all. Connecticut is riding an equally improbable hot streak having won 10 straight games after finishing 9th in the Big East.

While we can't predict with absolute certainty who will be left standing when the final horn sounds, we can give a pretty accurate representation of what to expect from both offenses tonight. Both Connecticut and Butler feature star driven offenses with the Huskies relying heavily on Kemba Walker and the Bulldogs subsequently on Shelvin Mack and Matt Howard. Each team runs certain sets fairly consistently to get the ball to their scorers where they are most comfortable as we'll see in this breakdown.

The Huskies rely on guard Kemba Walker to a degree that is matched by few other players in the country - especially for individuals from power conferences. In all, Walker's 31.4% usage rate puts him in a tie for 19th nationally, with only Alec Burks of Colorado having a higher mark when looking at players from the big six conferences. Needless to say the numbers below in UConn's offensive distribution should come as no surprise, Walker accounts for greater than 30% of the team's points, field goals, three-pointers, assists and steals, while also proving responsible for over 40% of their free throws.

The rest of the scoring load is evenly distributed with the trio of Jeremy Lamb, Shabazz Napier and Alex Oriakhi accounting for between 10% and 15% of the team's point total. Oriakhi has been the team's chief rebounder, while the freshman Napier has been a valuable contributor as a secondary playmaker alongside Walker. Both guards have done a good job of protecting the basketball this season as the Huskies' 17.1% turnover rate was the 24th lowest in Division 1 this season. As if traditionally the case with Connecticut teams as well, the frontcourt hits the offensive glass very hard, as exhibited by the 7th best offensive rebound rate in the country at 38.1%.

Butler doesn't have anyone on the roster that is nearly the singular weapon on a consistent basis like Walker has been for Connecticut, though Shelvin Mack has shown on many occasions that he is more than capable of carrying an equal load to the All-American. Both he and senior Matt Howard split the heavier scoring load (about 23% of total points each), while Alex Smith and Shawn Vanzant have been the secondary scorers throughout the season. These numbers tend to hold true when examining the usage rate metric as well with Mack and Howard both above 26% (heavy usage) and no other member of the roster posting a mark above 18%. Slow and steady has been the key for Butler, as the Bulldogs have managed to slow down the pace against every team they've faced in the NCAA Tournament and avoided turning the ball over - the combination has yielded wins even on nights when they haven't shot well.

How The Stars Score

Let's start with Butler's Matt Howard, an inside/outside threat who has managed the unique feat of recording over 20% of his possession both in the post and in spot-up settings. It is this versatility that allows the Bulldogs to effectively run sets to get their big man the basketball on the block in a position where he has established position and can go to work against his defender. 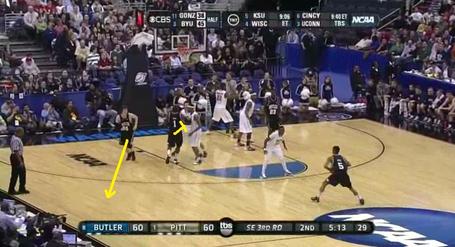 We'll use an example from Butler's round of 32 match-up with Pittsburgh - a game that was exciting for obvious reasons. The Bulldogs will typically start with a perimeter player on the wing while Howard will float around the same side block, without actually fighting for position. In this case the perimeter player is Shelvin Mack who screens down allowing Howard to flash to the wing and catch a pass in a spot-up setting. The defender - in this case Gary McGhee - has to honor the forwards shot as Howard has hit nearly 43% of his 122 three-point attempts this season, so the defender will extend out to the arc with pressure. 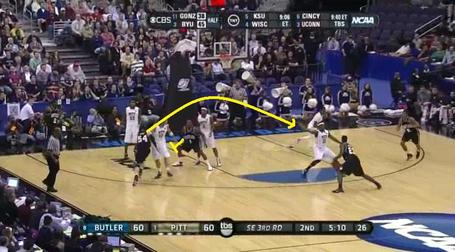 Once the defender - almost always a slower big man - commits to Howard in the spot-up set he swings it back to the top of the key while the guard (Mack) who set the initial down screen now sets a back screen, freeing up Howard to go baseline to the opposite block as the ball rotates around the perimeter. 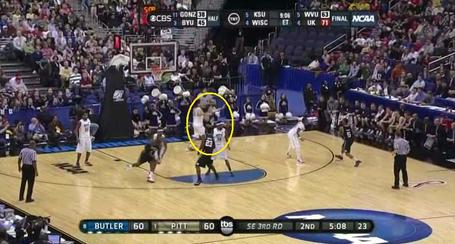 That step that the back screen gives Howard is just enough for him to beat his defender to the opposite block as the ball arrives on the same side wing. Once position is established, the senior is a very effective low post scorer, connecting on 43% of his shot attempts here, while getting to the line on an additional 20% of his touches inside according to Synergy Sports Technology. In all, he scores more than .92 points per possession on the block which is in the top one-fourth nationally.

We'll now look at Connecticut's Kemba Walker who gets the largest percentage of his half court possessions in pick and roll sets - which is also the case for Butler's Shelvin Mack. In all, one-fifth of Walker's touches this season have been out of the pick and roll where he ranks in the 81st percentile nationally at .93 points per possession on 38.1% shooting. What happens often however is the Huskies will use this set as a way of actually isolating their star guard where he can go to work with his elite scoring ability. 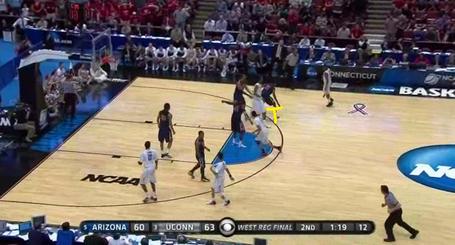 In this first example against Arizona in the Elite Eight, Walker operates on the right wing, something he only does about 21% of the time, but interestingly enough is at his most effective here, ranking as one of the best scorers in the country out of screen and roll sets from this side of the floor. 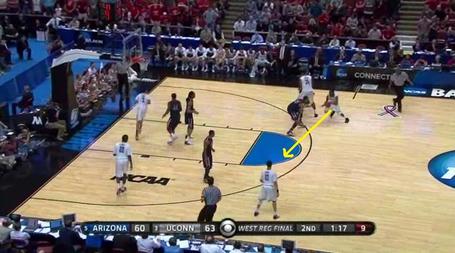 The action that takes place once Walker clears the screen is what proves most important in the majority of these possessions. The original defender is unable to fight through the screen, leaving Derrick Williams to defend Walker who already has a head of steam coming off the screen. As superior of an athlete as the Arizona star is, it is a tall task for any frontcourt player to have to guard a player of Walker's scoring abilities in this setting. 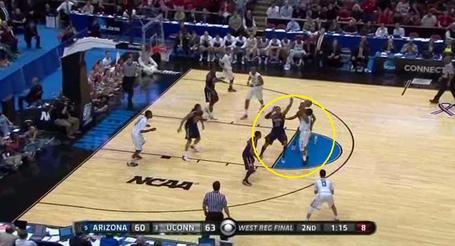 The end result is a pull-up jumper from about 18-feet for Walker, an area of the floor in which he shoots 45%, which easily puts him in the top one-fourth in the country for scoring efficiency. Credit Derrick Williams who actually does an excellent job of defending the play and is well within range to contest the shot as it is released, but Walker is so tough pulling up off of screens (nearly 40% shooting), that he still buries a high percentage of the contested shots anyway. So give this information, it goes without saying that Butler's guards are going to have fight through screens and stick with Walker as the Bulldogs don't have a single forward that can match the level of athleticism that Williams brings.

In this next setting we'll see the threat that Walker presents when Connecticut opts to run the high screen and roll from the top of the key, which accounts for nearly two-third of his touches out of this play type. 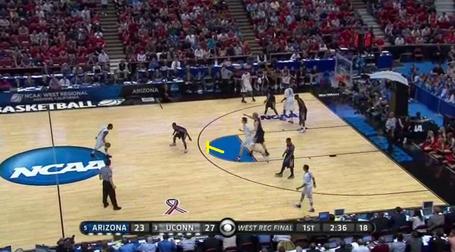 Walker slowly walks the ball to the top of they key as a teammate prepares to set the initial ball screen. Notice the three remaining UConn players are spreading the court leaving the middle wide open for Walker to operate off the dribble. The Huskies aren't a deadly perimeter shooting team, so in these sets, Butler may consider keeping a defender closer to home when they recognize the pick and roll coming. 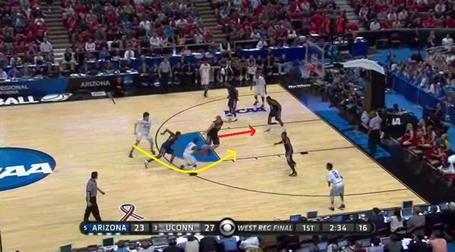 This time the defender being screened does a good job of fighting through the screen, winding up about a half step behind Walker, but the problem here is with the help defender in big man Kyryl Natyazhko. He hedges out on the screen initially but begins retreating far too quickly allowing Walker to continue attacking off the dribble. As we can see Natyazhko's man is still on the perimeter so there's no need for him to be dropping back into the lane. 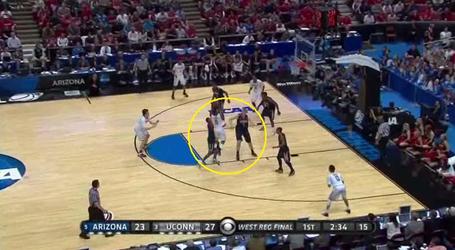 The end result once again is a short jumper off the dribble - one that Walker connects on. With Natyazhko backpedaling off the initial screen, he is unable to even get a hand up to contest the shot resulting in an easy look. Andrew Smith and Matt Howard aren't quick enough to cover Walker one-on-one for long, but Howard in particular is good enough at judging angles that he should be able to effectively deter the dribble drive for an extra split second as he hedges.

This game could very easily come down to a couple of plays in the second half and the ability to shut down a bread and butter set for either defense could provide just enough stops to yield a win in the biggest game of the season. Whether or not the Huskies or the Bulldogs can slow down these plays is an entirely different matter.