Share All sharing options for: The Point Guard Conundrum: Should Shelvin Mack Enter The NBA Draft?

After a strong junior season that saw him lead the Butler Bulldogs to a second consecutive Final Four, Shelvin Mack is now faced with the difficult decision to return for his senior season or try his luck with the NBA.

The point guard posted solid but not spectacular averages of 16 points, 4 rebounds and 3 assists during the season, but stepped up his game significantly during the NCAA Tournament. Facing stiff competition, Mack had three tremendous individual performances, scoring 30 points against Pittsburgh, 27 versus Florida and produced a 24-point effort in the national semi-finals facing VCU. It would seem that in the wake of this kind of a run and having achieved so much during his collegiate career, it would only seem natural for him to begin the next step of his career and throw himself into the draft process - the problem is, questions still linger with his game.

Pro scouts know Mack can score, particularly in isolation sets where he ranked in the 97th percentile nationally at 1.14 points per possession according to Synergy Sports. We've also seen the physical guard score against power conference teams in the past (remember the 28 points he hung on Louisville in November?), so despite proving his worth as a winner, Mack didn't suddenly prove a revelation as a basketball player. What NBA teams are most interested in is whether or not this score first floor general can run an offense consistently - not just in short bursts. This isn't to say that he has done a poor job of this to date, rather his team needs him to be a scorer in order to be successful, so Mack's sample size as a facilitator has been somewhat limited.

To fully understand where he stands in the process of being able to jump to the role of a pro point guard, we need to begin with Mack's offensive tendencies.

A whopping 45.1% of Mack's total possessions this season came in pick and roll sets and isolation plays, an unusually high ratio for a college point guard but one that compares favorably to the pro game. Up to this point however, Butler has used these play-types as a means of playing to his scoring strengths, giving him space to operate off the dribble - an area that he has success in, both attacking the rim and shooting on the move. At the next level he will undoubtedly have to look to pass much more frequently in both scenarios than he does right now. In all, despite a usage rate of 28.1 (a mark that ranked 108th amongst all Division 1 players), Mack's assist rate of 24.9 was only 226th overall.

Out of the pick and roll, Mack attempted a shot himself nearly two-thirds of the time this season, but proved efficient when he did opt to pass, producing an adjusted field goal percentage of 50.5% and turning the ball over less than 4% of the time. Isolation sets prove to be slightly more troublesome for the junior. To begin with, Mack only passes off in this scenario one out of every five possessions and when he does, many times it is more a bail out than it is setting up a teammate for an open look. It's telling that Butler shoots such a high percentage on shots created by Mack out of the pick and roll but nearly 15% lower in isolation - he simply doesn't create as well without the initial screen to set him free and this is where NBA teams are going to want to see a larger sample size.

Let's take a closer look at exactly how Mack operates in these two primary settings and what he does to create for others on the floor, starting with a pick and roll set. 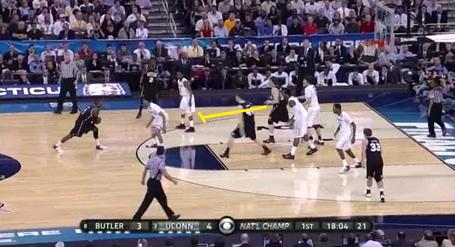 In this example - taken from the national champion game against elite athletes in UConn - Mack starts at the top of the key where he is at his most dangerous given his options of going either right or left with a large amount of court space to work with. He works his way up to the arc as Matt Howard flashes from the left block to set the screen. 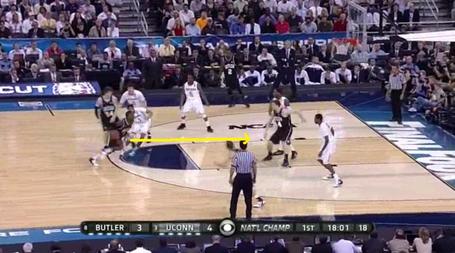 One thing Mack does quite well when attacking off screens from the high point is exhibit patience. His pace is solid, showing a knack for reading the defense before making his move, which is the case in this particular play. When Mack realizes Howard's man is coming from the left side to provide a hedge, he dribbles away from the screen, catching his defender off guard and beating him on the all important first step. 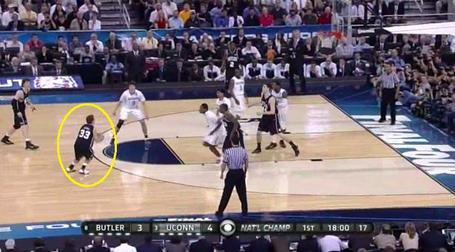 Once in the lane, Chase Stigall rotates behind the play and Mack - displaying solid court vision - hits him on a kick out setting up the sophomore for an uncontested three-pointer. Interestingly enough, the junior seems to be at his best when shooters rotate behind him, providing an easy target for the ball to be delivered, as opposed to spotting up in the corners. This speaks somewhat to the tendency that Mack can have to get tunnel vision on his drives, only recognizing the opportunity to distribute once his initial foray to the rim has been stopped.

Next we'll take a look an isolation set where Mack is successful in facilitating Butler's offense off the dribble. 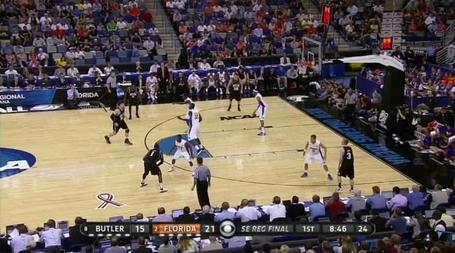 This time we'll take an example from the Bulldog's Elite Eight win over Florida. Again, Mack begins the play near the top of the key with his teammates spacing the floor well, giving him plenty of room to operate. It's worth noting that of all the iso sets he has been involved in this season, over 56% of them initiated with him at the high point rather than either of the two wings. His total offensive production in this particular starting point was 1.16 - a mark that puts him in the 92nd percentile in the country. 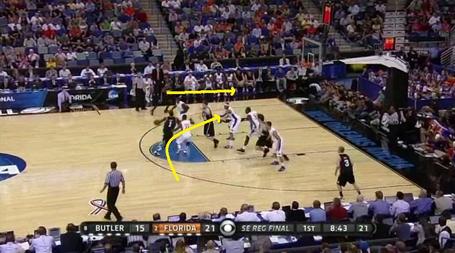 As Mack penetrates the lane, drawing the defense in, Ronald Nored begins dropping to the far corner, anticipating a kick out and open look. This image shows that the point guard hasn't blown by his defender, but Mack is strong enough that he can still often muscle his way past other college guards - something that may not necessarily be the case at the pro level. 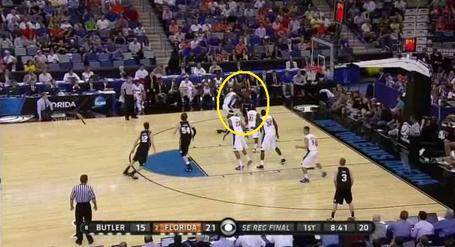 The play ends in textbook fashion with an open look for Nored in the corner as Mack delivers the ball on the money. Again, even though he hasn't been consistently strong in this particular play-type, the junior is still capable of making plays out of this set, just showing a lack of consistency.

We'll look at one final set that incorporates both play-types and shows some of the issues Mack has creating off the dribble when forced out of his comfort spots on the floor. 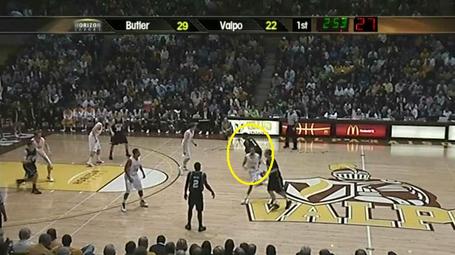 In this meeting with Valparaiso Mack begins in an isolation set shading slightly to the far wing. This is the area of the floor where he has been the least efficient in this play-type, averaging .96 points per possession on 36% shooting, which only ranks in the 76th percentile nationally. 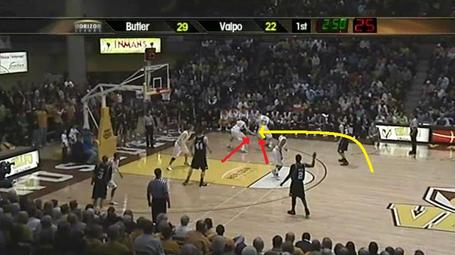 Mack comes off a very soft screen - really just a teammate running interference - but dribbles right to the corner as a pair of defenders move in to apply the trap. What's worse, immediately upon feeling pressure, Mack picks up his dribble leaving him in an even more vulnerable spot. These are the kinds of mistakes that have been somewhat overshadowed up to this point because of his scoring exploits, but in order to be a point guard in the NBA, these errors will have to be minimized. 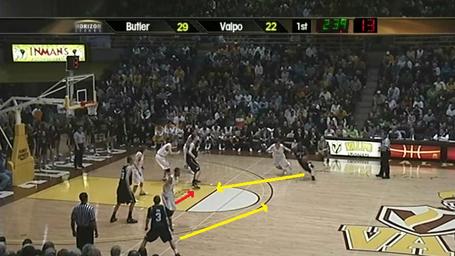 He manages to skip the pass over the top and recent the play, ultimately receiving the ball in another iso look from the same spot as before. This time he attacks the middle, drawing an additional defender as Zach Hahn rotates behind the play. 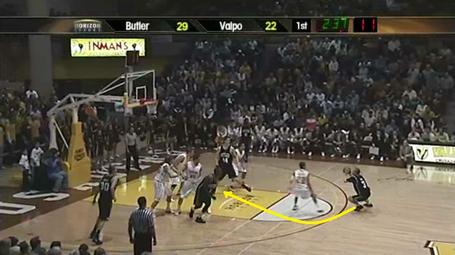 As was the case in one of the earlier plays we looked at, Mack delivers the ball to the man rotating behind the play, ultimately resulting in Hahn able to beat a scrambling defender for a runner in the lane.

Does Mack risk not being drafted should he enter his name and hire an agent this year? No, in all likelihood he will be drafted, but his chances of landing in the first round are questionable at best right now. There's always a concern of not earning a guaranteed contract by being among the first 30 players selected, but with a potential lockout looming, that makes things even more difficult for fringe first-rounders like Mack. Ultimately, we just haven't seen him spend enough time as a true point guard - on offense or defense - to safely say that NBA teams will take an early flyer on him.

Returning to Butler for his senior season, proving he can play the point for long stretches while also showing that he can defend the position at an NBA level will do wonders for his stock and allow him to potentially crack the first round.