For many programs, a three-year record of 53-41 would hardly qualify as anything above average. In fact, it would lean heavily towards mediocre. In Stony Brook, New York it's the best of times as the Seawolves are in the midst of their best run in 20 years and best ever since transitioning to Division 1 a dozen years ago.

Six-year head coach Steve Pikiell has presided over the low points (4-24 in 2006) and the highest (22-10 in 2010). Now he stands on the precipice of what could go down as the biggest year in the history of the program. Stony Brook returns a wealth of experience, but more importantly, a wealth of size. Things chance, narratives develop over the course of a long season, so on and so forth, but if there's a better frontcourt in the America East entering the season point it out. This interior game - should its potential be realized - will be the foundation on which the Seawolves could build their first conference championship on.

It'd be relatively easy to say the entire 2011-2012 season is the storyline as Stony Brook will enter as one of the favorites to walk away with an automatic bid to the school's first NCAA Tournament. But for the sake of thoroughness, the development of Eric McAlister and Anthony Mayo may be the deciding factors in exactly how far the Seawolves can go. As freshman this forward duo showed a lot of promise in their limited playing time and would give Steve Pikiell's club the kind of inside depth and ability that would be unmatched in the conference.

The lone senior on last year's team, Chris Martin, will certainly be missed. The 6-foot-1 guard helped generate the Seawolves offense with his ability to attack of the dribble - when he was healthy of course. As a result of lingering knee injuries, Martin played in just 18 games in his final season, though he was the team's second leading scorer, third in rebounds and tied for the team-lead in assists. Sophomore Preye Preboye will also be absent from the floor next season as the swingman announced he would be transferring in early April. In his final season with program he played just 12 minutes per game. 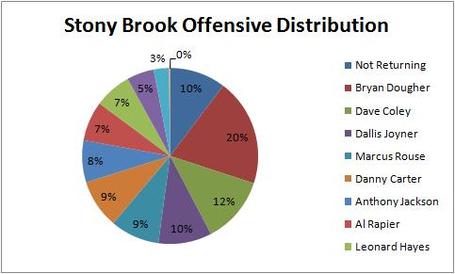 Despite struggling as an offense (295th nationally in efficiency), Stony Brook did manage to share the basketball very well last season as we can see above. Sharpshooter Bryan Dougher had the largest usage rate, but after that, no one player really dominated the basketball over anyone else. That probably isn't going to change next season, this roster isn't rich with major scorers or players who constantly need the basketball in their hands, rather a collective group that will all play their part.

From a specific play-type standpoint, the Seawolves left a lot to be desired regarding their offensive efficiency (points per possession), ranking in the top half of the country in only shots created off of screens and hand off plays. In fact, they ranked quite high in both these scenarios, the problem being, collectively they only accounted for 10.2% of their total shots according to Synergy Sports. Elsewhere things weren't nearly as positive. Stony Brook collectively was in the bottom-one third in the country in spot-up, transition, isolation and post-up efficiency and had the second lowest two-point field goal percentage in the nation (40.3%) according to Ken Pomeroy.

Perimeter shooting proved the lone bright spot in conference play last season where the Seawolves shot nearly 37% from beyond the arc against America East foes. Dougher and Leonard Hayes will provide the heavy artillery from the outside, with the former firing away nearly eight times per game last season and the latter hitting a scintillating 45.2% of his tries. Overall Stony Brook wasn't a very good spot-up team, but they excelled out of quick catch and shoot sets, shooting 37% with an adjusted field goal percentage of over 51. Not only did this rank them tops in the conference despite an otherwise pedestrian offense, but it ranked them in the top one-third amongst all Division 1 programs. Neither of these two is going to be the x-factor though, Pikiell knows what he is getting from these two and that's an outside presence. Enter Marcus Rouse.

As a sophomore, Rouse was third on the team in scoring despite seeing a relatively low usage rate - in that time though he showed tremendous flashes of potential. The Seawolves were out their worst shooting the basketball from mid-range, all except for 6-foot guard who torched the nets to the tune of 50% shooting from this range, ranking in the top 10% nationally. Furthermore, he rated even higher shooting off the dribble (91st percentile) and scoring out of isolation sets (92nd percentile). Certainly we're viewing this data through the scope of a limited sample size, but an improved Rouse seeing more touches could stand as the in between weapon Stony Brook needs to balance its perimeter shooting and burgeoning frontcourt. Let's take a quick look at just how Rouse can make this offense a little more dynamic next season with a bump in usage. 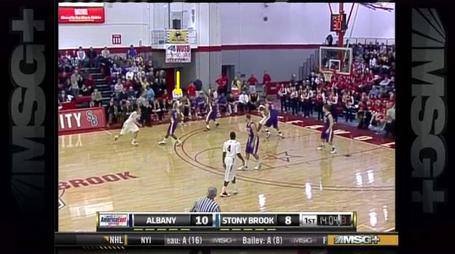 In this example from a conference match-up with Albany, Rouse receives the ball on the left wing as the offense clears out that side of the court save for a post man. In general he tends to prefer the left side for isolation touches much more than the right side of the floor, by almost a 2-to-1 ratio. 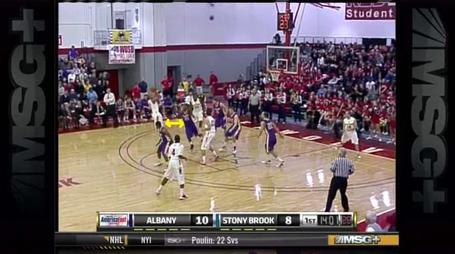 It's a simple play, as Rouse attacks off the dribble and quick pulls up from the elbow for a jumper. We can see in this still shot though just how quickly the sophomore is able to start and stop as he takes just a pair of dribbles from his starting point, yet creates a great deal of space between he and his defender. For a better look, here's the play in real time just to get a sense of the kind of promise Rouse shows as a player who can create scoring chances off the dribble.

Anthony Jackson is another player who should see an increase in touches and production as he moves into his sophomore season. While his minutes were limited last season, he was the team's most efficient pick and roll player when opting to look for his shot. Overall, the rookie ranked in the top 15% nationally scoring better than one point per possession out of this play-type, producing an adjusted field goal percentage of 47.1%. He does need to improve his ability to facilitate the offense here though. It wasn't an issue of turnovers with Jackson, rather his inability to get the ball to his teammates in favorable scoring positions.

Of course what we're forgetting here - and frankly what really makes Stony Brook a scary team in regards to depth - is the return of forward Tommy Brenton who missed all of last season with a knee injury. Two years ago as a junior he led the conference in rebounds and was second in steals while also chipping in nearly eight points per game. Beyond that though, he might be the most efficient offensive player returning to the team (pending his health of course). He was at his best moving off the ball and crashing the offensive glass, but proved nearly as effective in transition and when attacking out of isolation possessions.

The rest of the frontcourt rotation, Dallis Joyner, Mayo and McAlister could swing either way, but there's potential for this trio to combine with Brenton to be something impressive. Joyner is the team's top returning rebounder from last season and proved to be an adequate finisher in the low post while accounting for 50% of the teams possessions here. McAlister was actually at his best in spot-up scenarios and could be a mismatch down the road, but for now should utilize his 6-foot-8 frame inside, while Mayo not surprisingly was at his most effective on the glass with his long, thin build.

As has been the case with a lot of our America East scouting reports thus far, defense is king for the Seawolves. Yes, a slower pace helps keep opposing point totals low, but using tempo free data, Stony Brook ranked in the top 7% in the country in defensive efficiency, allowing less than .8 points per possession on 38.4% shooting, stellar numbers. This unit ranked 20th in three-point shooting against and 52nd in two-point field goal percentage allowed and generally excelled in every play-type save for the transition game where they ranked in just the 45th percentile. Individually there are some studs here, specifically Dougher, Joyner and junior forward Danny Carter, all who rank in the 91st percentile or higher in points per possession against. The return of Brenton to the defensive unit will only make this team stronger as well. As good as this team was at shutting down the opposition last year, there's the potential for Stony Brook to far exceed the accomplishments of a group that ranked 90th in defensive efficiency a year ago.

There's no questioning the depth of this team on paper - but there are still plenty of what if's at this point. Will Brenton be fully recovered from his knee injury and back to his old self? Does a young frontcourt take a step forward this season? For that matter, does the guard rotation after Dougher and Hayes progress significantly? If the answer to all of these questions is yes, then 2012 could be a watershed season for the Seawolves.