It's been a swift decline for UMBC since it's 2008 America East championship season. In the last three seasons the Retrievers win totals have dropped from 24 to 15 and have bottomed out each of the last two seasons at 4 and 5 wins respectively. Head coach Randy Monroe is entering his 8th season as head coach of the program and has been on the program's staff since 1994. Unfortunately for the 2008 conference coach of the year his record has plummeted in recent years as well and now stands at 81-124.

UMBC is in a tough environment to succeed as a basketball program to say the least. In a fertile recruiting ground the Retrievers have to contend with schools such as Maryland and Georgetown to the south, with the Big 5 of Philadelphia to the north. Yet, there is reason for optimism in 2012, that this could be the season that the team begins its climb out of the America East cellar. UMBC returns several key pieces from a year ago and welcome a promising freshman class to campus in the fall. While the Retrievers almost certainly won't contend for a postseason berth beyond the conference tournament, this could be the kind of year that fans look back to as the start of something good.

Randy Monroe has and will continue to be square on the hot seat in 2012 - his record indicates as much. While it might not be necessary to produce a winning season in order to keep his job secure, another sub-10 win record could result in the end of this partnership. A conference championship undoubtedly buys a certain degree of leeway in the America East, but not when the program falls off at the rate that UMBC has.

This is where things get interesting for the Retrievers - they don't lose nearly as much as a lot of other America East teams next season. In fact, they're one of the few programs that return their top player in regards to usage rate. Justin Fry will depart with his team-high six rebounds per game as does Travis King who was third on the team in scoring at nearly nine points per game. From there, the losses aren't all that severe. Laurence Jolicoeur saw less than 20 minutes a night and only accounted for 10% of total possessions in 2011, while Bakari Smith contributed little in his time on the floor. 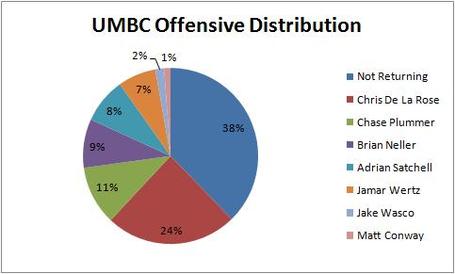 That large sliver of red you see is Chris De La Rosa and the presence of the second team All-America East guard will be an unquestionable comfort for UMBC fans. The team's leading scorer (15.5 ppg) and offensive facilitator (6.0 apg) has already proven he can carry the offense once before, giving the Retrievers a trustworthy top option, more than many of their opponents can say.

Overall this is a below average offense, barely cracking the top 300 nationally in offensive efficiency and ranking 6th in the conference. As far as basic metrics, the lone bright spot was a nearly 71% mark at the free throw line which was the best ratio in the America East. When we delve further into the UMBC offense however we start to see some interesting trends - most notably that the Retrievers are a poor jump shooting team and aren't capable of creating scoring chances for themselves very well.

The offense was one of the best pick and roll teams in the country and ranked 5th in the country in utilizing hand off sets. Furthermore, the one shot type this team excelled at was finishing around the rim on driving attempts where they shot a respectable 54% on the season. What this tells us is when the Retrievers can free their ball handlers on the attack, good things happen, they just don't manage to accomplish this very often.

De La Rosa in many ways is a microcosm of the offense, excelling out of the pick and roll and iso sets, but performing well below the national average in transition and spot-up plays. His ability to operate off of screens will be paramount to his teams scoring chances this season - let's take a look at an example from a December meeting with eventual national champion Connecticut. 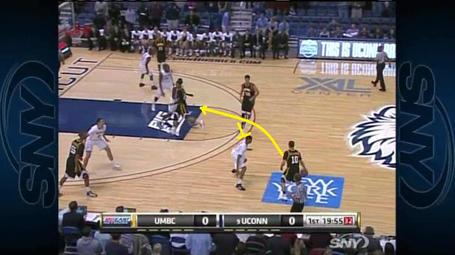 Off the opening tip De La Rose sets up on the left side of the floor with Adrian Satchell's screen coming from the far side near the top of the key. 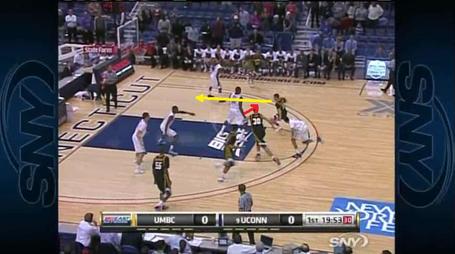 Thanks to his quickness and a solid screen, De La Rosa has no trouble turning the corner and beating his man off the dribble, but this is where he shows his value as a creator with the basketball. As the frontcourt defender flashes up to provide help, DLR comes to a quick stop, stutter steps, then blows by to the rim. 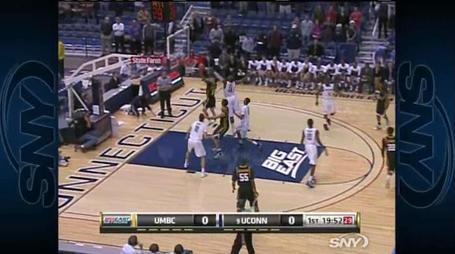 The result is a pretty good scoring chance at the rim that he misses, but this kind of play against elite Big East athletes shows how effective De La Rose can be. He is one of the best in the conference at changing speeds on the fly and it's reflected in his solid standing as a pick and roll scorer - ranking in the top one-fourth nationally at .86 points per possession. He's also managed a pretty nice balance of finding his own shot versus deferring to teammates, opting to distribute about 40% of the time.

The rest of the offense is a mixed bag of questions. Jamar Wertz joined the program last year with high expectations and while he didn't play poorly, didn't necessarily eclipse a bar that was set fairly high. The 6-foot-4 guard saw a limited usage rate, but ranked in the top half nationally in scoring efficiency, moving well off the basketball and proving an adequate option in spot-up sets. They keys however are likely returning juniors Brian Neller and Adrian Satchell, both of whom regressed somewhat last season after showing promise in their rookie seasons. Both were average scorers with Satchell doing his best work on the offensive glass and Neller excelling at scoring cutting on hand offs.

If there's one wild card next season however it's a promising freshman class. Will Wise, Jarell Lane and Jordan Wejnert all earned grades of at least 72 from ESPN, but it's undoubtedly the power forward Wise who is generating the most excitement. A 6-foot-8, 220-pound product of the Hun School in New Jersey, Wise has excellent length, can face up and score from mid-range and has a lot of upside if he can continue to develop. We're talking about a potential first team All-Conference performer down the road, but an impact player from day one.

The Achilles heel for the Retrievers next season will again be their inability to limit opposing offenses. UMBC had the third worst defense efficiency in the country last season and struggled in almost every scenario on the court. Opponents dominated them on the glass, shot 52% from inside the arc and 38% from beyond it - overall it wasn't pretty. In fact, so bleak is the outlook on defense based on what available data we have, Matt Conway is the only returning player who finished higher than the 43rd percentile nationally in points per possession allowed, but he account for just 1.4% of total possessions defended.

In simplest terms, UMBC is a potential swing team in the America East. If the defense improves even marginally with the potential on offense, the Retrievers could battle for position in the middle of the conference pack. If the rest of the roster can't provide some additional support behind De La Rose though, it could be another long season and the end for Randy Monroe on the sidelines.