It should really come as no surprise to anyone, but with Mark Turgeon leaving Texas A&M for Maryland, one of the names continuously popping up on most short lists for the Aggies vacancy is Wichita State head coach Gregg Marshall. 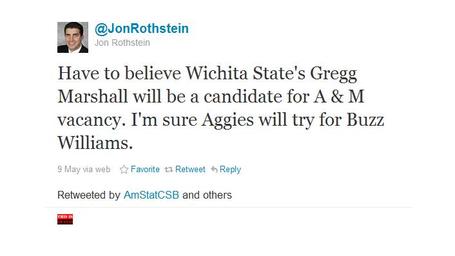 This talk makes sense for a number of reasons not the least of which are Marshall was Turgeon's replacement when he took the A&M job a few years ago, and most pundits expect Marshall to move up to a BCS level job anyway in the not too distant future.

His tenure with the Shockers has been highlighted by the building job he has done in his four seasons with the program, taking Wichita State from an 11-20 team in his first season, to a 29-win year in 2011 that included an NIT championship. Given the relative success that the Aggies had going to the Missouri Valley Conference once, it undoubtedly makes sense that they would at least entertain Marshall's name in addition to some of the others being mentioned.

There does seem to be some degree of disagreement amongst the national experts at this point and time: CBS's Matt Norlander lists Marshall as one of the favorites for the position while Jeff Goodman of Fox Sports does not include the Wichita State coach.