It would be easy to say this is the best of times for the Xavier basketball program, but that would severely underscore what the Musketeers have become. Led by second-year head coach Chris Mack the X-men earned their sixth straight NCAA Tournament berth in 2011 (one of only 12 schools to currently boast such a streak) and 10th in the last 11 years. Thanks to an equally impressive supply of star power and a string of elite coaches, Xavier has blossomed not only into a national power, but one of the most consistent programs in the country over the last two decades.

All of that leads up to a 2012 season in which expectations may be at an all-time high. The Musketeers have signed Mack to an extension through the 2017-18 season, star guard Tu Holloway is back after testing the NBA draft waters and a trio of highly regarded freshmen will join the program - not to mention the other firepower returning to the roster. What was a very talented lineup a season ago, is now one with depth.

The bar has been set high by many of the experts and now fans will watch and see if the Musketeers can achieve previously unreached heights in the season to come.

Based on what this roster will look like when the season begins the question has to be posed: is this a Final Four team? A lot can happen from now until March, but of Xavier gets out of the gate fast in the regular season and handles the Atlantic-10 in the same fashion it did last year, a very deep run in March will be an omnipresent cloud floating around the team.

Truth be told, the Musketeers haven't taken a major hit regarding the players departing from the program. The loss of forward Jamel McLean is likely the biggest lost due in large part to the excellent defensive presence he provided on the inside with his 6-foot-8, 245-pound frame. Fellow senior Dante' Jackson departs as well, the only other non-returning player who saw a significant number of touches on the offensive end. Freshmen Jay Canty and Jordan Latham transfered out of the program following the season, but neither is a significant loss. 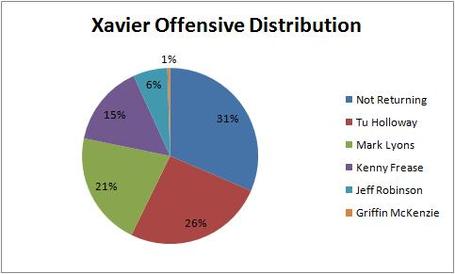 This team starts and ends with Holloway who unsurprisingly has a high usage rate for a college player. The reigning Atlantic-10 player of the year had a monster season, averaging just under 20 points, to go along with 5 rebounds and 5.4 assists per game. After flirting with the NBA, the do it all guard opted to return for his senior season and in doing so has a chance to earn even more postseason accolades after landing on the AP All-American Third Team last year - just the third Xavier underclassman to earn such a distinction.

Overall we're talking about a very efficient offense when examining the Musketeers. They ranked 41st nationally in adjusted offensive efficiency according to Ken Pomeroy and were tops in the conference in scoring efficiency, effective field goal percentage, two-point field goal shooting and free throw shooting. Their play-type breakdown says a lot about the versatility of this offense with spot-up attempts, pick and roll sets and post-up touches proving the three most prevalent means in which the Musketeers run their scoring attack. In fact, other than transition scoring - an area in which Xavier ranks in the 65th percentile using the points per possession metric - Synergy Sports data shows that they rank in the top one-fourth in the country in every play-type.

Still, none of this is possible without Holloway. The senior scored nearly one point per possession last season which puts him in the 82nd percentile in all of Division 1. His remarkably high usage rate in the pick and roll set (over 36% of his total possessions) is unusually high for a college guard, but he is devastatingly effective here, almost as good as he is in spot-up sets (he ranks in the top 6% in the country here). Let's look at a couple of examples of Holloway as both a scorer and facilitator in this play-type. 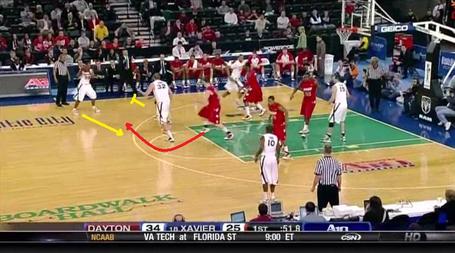 In this first example taken from a meeting with A-10 foe Dayton, Holloway has the basketball on the extended left wing as Kenny Frease flashes from the middle to set a ball screen. As the initial defender is screened, Frease's man hedges out wide to cut off dribble penetration. 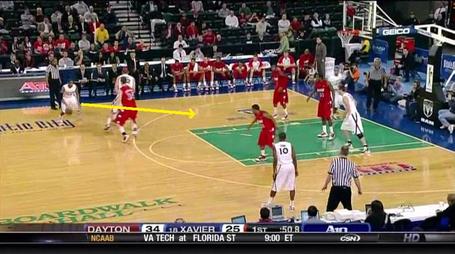 This is where Holloway is so dangerous, not simply because of his speed and quickness, but his smarts and ability to recognize how the defense is aligning. As Frease's defender overplays the screen, the senior guard slips the screen and slices right through the middle of the defense. 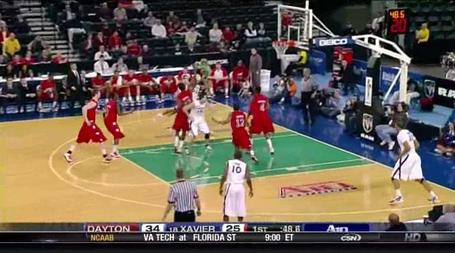 With the rest of the defense back on their heels in the lane, Holloway is able to get right into the heart of the paint before a last ditch effort to stop him results in a shooting foul. In all, he does tend to look for his shot more often than passing here, 68% of the time in fact, but his efficiency is unquestionable. Holloway ranks in the top 15% nationally in scoring efficiency off of screen and roll sets, shooting over 42% and drawing a foul nearly one-fifth of the time thanks to the pressure he puts on defenses when he can get a head of steam when he turns the corner.

As a distributor out of these sets however he actually proves even more efficient, even though he tends to go to this option a little less frequently. He tends to look to kick out to shooters on the perimeter most of the time, but has developed a nice chemistry with Frease when the big man opts to roll to the basket as we'll see in this next example. 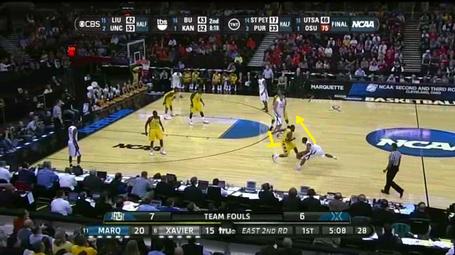 This next set comes from Xavier's NCAA Tournament meeting with Marquette and is a common practice for the Musketeers, setting a high screen for Holloway as he brings the ball up the floor, allowing him to build up more speed. He shows a quick jab step to the left then cuts right off the screen set by Frease. 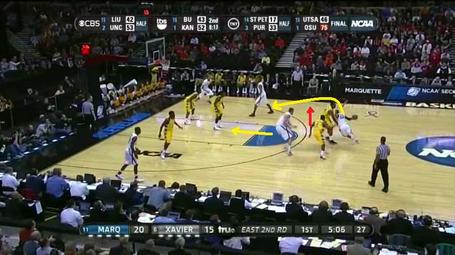 Both defenders collapse aggressively on the ball as Holloway clears the screen - something that happens more often than not - and Frease smartly cuts right down the middle of the lane when this happens. 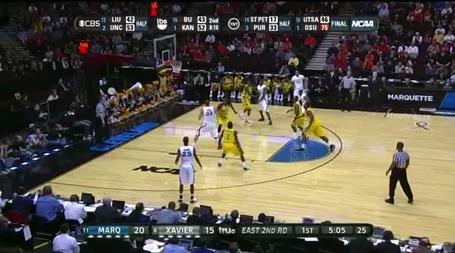 The play concludes with Holloway hitting Frease on the hands and the big man left with an easy look right at the rim.

Give his massive 7-foot, 270-pound frame, it should come as no surprise that Frease is the most efficient scorer for Xavier, scoring better than one point per possession on 55% shooting from the floor. His post game has continuously developed to the point that he is the third most utilized player on the roster, with touches on the block accounting for nearly half of his total possessions. Again though, as the example above shows, the big mans most valuable trait is his basketball IQ and ability to move effectively off the ball. He scores very efficiently on cuts and when rolling after setting screens, shooting nearly 60% in these scenarios. His presence in the middle is the kind of x-factor that takes Xavier from a very good team to a potentially great one, particularly when advancing to the deeper rounds in March.

Mark Lyons earned All-Conference honors after a sophomore season in which his usage rate was nearly as high as Holloway's. The sophomore was at his best in spot-up and pick and roll scenarios, play-types that accounted for nearly half of his total touches last year. His game is built around his jumper, accounting for 54% of his total shot attempts and by far the only shot type (shots at the rim, runners, post-ups) that he is efficient with, tending to launch the bulk of these from beyond the arc. Lyons has a knack for rotating away from plays and spotting up, which may seem counterintuitive, but the Musketeers have done a nice job of recognizing this and looking for him frequently on kick outs and skip passes. It's a telling sign that 54% of his shot attempts are classified as unguarded by Synergy - he knows where to find the holes. More than just a catch and shoot player though, he has shown the ability to fire off the dribble with great efficiency, ranking in the top one-fourth nationally in this area.

The rest of the returning roster features a series of little used players, but returning junior Jeff Robinson presents some real intrigue given his 6-foot-9 frame, athleticism and burgeoning versatility. He only had a 6% usage rate last season, but scored very efficiently in the post, moving off the ball and in the rare instances where he was isolated with the basketball. While he may never be a featured player inn Xavier's offense - at least not this season - he is a valuable complementary player with some real upside.

Then there's the talented freshman class joining the roster this fall. Dezmine Wells, Jalen Reynolds and Darwin Davis are all rated a 91 or higher by ESPN's recruiting services, with Wells ranking 47th nationally in the 2011 class. Many in the business have repeatedly said that Xavier has made a steal by getting a commitment from Wells, a small forward with a college-ready physique who was also recruited by programs like Georgetown, Tennessee and Miami. Reynolds a long power forward at 6-foot-9 can be an immediate impact player on the defensive end and is already being called a major sleeper in this class. Brad Redford will return to the court for his junior season after missing all of last year with a torn acl. The three-point specialist is considered one of the top marksmen in the county and has a scintillating 44.5% career shooting mark from beyond the perimeter. Expect him to be a favorite target for Holloway to drive and kick to. Redshirt freshman Justin Martin was a top-100 recruit and will be another nice rotational player right away, as will Monmouth transfer Travis Taylor who averaged 18 points and nearly 8 rebounds as a sophomore in the NEC.

Defensively Xavier is stout, but not necessarily on equal footing with the offense. The Musketeers ranked third in the A-10 in efficiency last season at this end of the floor, but not surprisingly held opponents to the fewest offensive rebounds and lowest two-point field goal percentage in the conference. Holloway is their top returning defender as far as points per possession against (just .78), with Lyons and Frease proving above average in this regard as well. One big question mark will be how well the freshmen get acclimated defensively and whether Robinson can improve his play here as well.

Ultimately, there is there potential for this to be a historic season for Xavier. They will be the clear cut favorite to win the conference and will undoubtedly be ranked in the top 25 by nearly everyone to start the season - it's simply a matter of how high. The Musketeers have been to the Elite Eight before, this team may have the potential to go one step further.