After his name continued to pop up on many lists for the Texas A&M head coaching job - despite many assuming he would stay anyway - it looks like Gregg Marshall will in fact be back on the Shockers bench for the 2011-12 season.

Brent Zwerneman, who covers the Aggies for both the San Antonio Express-News and the Houston Chronicle (the man is a workhorse), tweeted just a couple of hours ago that according to his sources Marshall is no longer in the picture for the position. 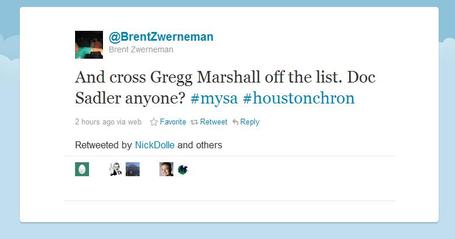 One must assume that Marshall was the one who shut the door on his candidacy for the position, assuming A&M reached out to him. Keep in mind, it wasn't all that long ago that Marshall passed on the vacancy at North Carolina State, despite having some ties to that region of the country.

So where do things go from here? Well for Wichita State it means they keep an outstanding coach for another season on the midst of an NIT Championship. Of course, as many will continue to say, it's only a matter of time before Marshall is ultimately offered a BCS job that is just too plush to pass on. As for the Aggies? Zwerneman seems to think that the school will make a run at Nebraska's Doc Sadler, while several other names are still floating around at this time, including Johnny Jones of North Texas, who is likely a dark horse for the position at this point and time. Of course, as we saw in the Maryland coach search in the last week, things can change very quickly.