It just feels right when Temple is a national player in the college basketball world. After struggling through the middle part of the 2000's, the Owls have been revived by Fran Dunphy, reaching the NCAA Tournament each of the last four seasons and prior to a loss against Richmond, had won three straight Atlantic-10 Tournament titles.

The question floating around the City of Brotherly Love now is can the Owls reach even greater heights? It would seem that asking Temple to eclipse a season in which they won 26 games and posted a 14-2 record is unreasonable, but there is enough firepower in the tank that it isn't inconceivable. With a veteran roster returning, a talented backcourt and a burgeoning big man in the middle (assuming he's healthy) the Owls could return to the top of the conference in 2012 and win multiple games when March Madness begins.

The issue of health will be one of the overarching themes of the 2011-12 season for Temple. If not for guard Scootie Randall being banged up and big man Michael Eric going down with a patella injury, the Owls would have gotten past San Diego State in March and moved on to the Sweet 16. On paper it seems that is the only thing that can keep this team from being great, is not being able to stay on the court. If Temple gets that part down, they will unquestionably be a handful.

The Owls are returning a tremendous amount of their offense from a year ago - much to the delight of those associated with the Temple program. With that said, the loss of Lavoy Allen inside is undoubtedly a big one, especially given the impact the forward had as a defender. While most will remember him for his propensity to rack up double-doubles (averaged one during his junior season), Allen was easily the team's best defender last season, limited opposing players to just .75 points per possession, a mark that put him in the top one-fourth nationally. Graduate student player Dutch Gaitley will be moving on as well, though he provided almost not contribution on the court. You'll notice below that Craig Williams is not included in the offensive distribution chart, but after receiving a medical redshirt last season he did not record any stats. 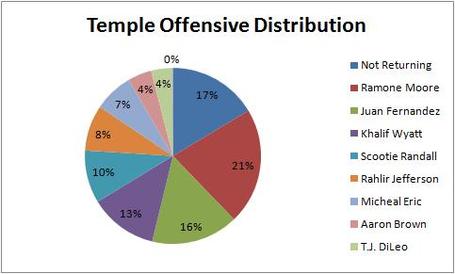 Yes, the Owls will look very similar to how they did last season - that's bad news not only for the Atlantic-10, but everyone on their schedule. The backcourt trio of Ramone Moore, Juan Fernandez and Randall will be one of the best around and certainly provides a nice core for this team to build on as other individuals (read: Khalif Wyatt and Eric) will likely be asked to do a little bit more this season.

Temple finished in the top half of the conference in every major offensive category last season and had the second most efficient offense in the A-10 despite not leading the group in anything - rather just being really good at everything (though it should be mentioned they had the 12th lowest turnover rate in the nation). Interestingly enough where this team is at its best is in transition, this despite ranking 254th in the country in pace. The Owls averaged nearly 1.16 points per possession running the break on 63% shooting which lands them in the top 10% nationally. Credit Fran Dunphy for instilling strong fundamentals in his players and those individuals having good basketball instincts. Temple doesn't do anything flashy when pushing the tempo, they just go about it in a smart way with talented players. Let's look at an example. 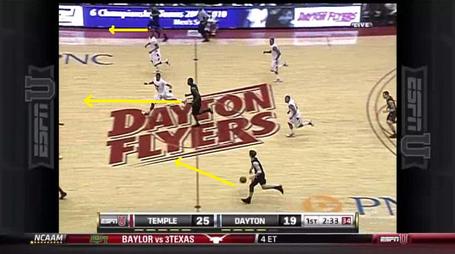 As we can see in this set taken from a meeting with Dayton, the Owls are running their lanes in textbook fashion. One man is flying up the far sideline, the man in the middle is streaking towards the paint and on the near sideline you have both the basketball and a little further ahead just out of frame is another wing flying down the side (you can make out their back foot). 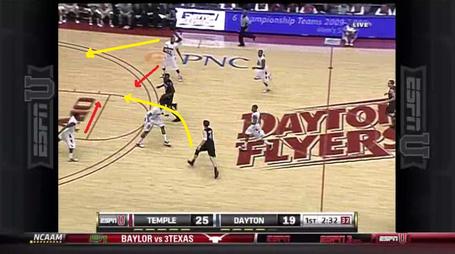 As Fernandez - the ball handler - crosses half court he makes a cut to head right down the middle of the lane as his post man continues to slide down towards the block. This is where Temple generally makes things happen, they apply pressure to the defense and are smart enough to react when the defense starts caving. Once he breaks the top of they key with the ball, Fernandez draws the entire defense in, all the while, Ramone Moore on the far side begins making his cut towards the basket. 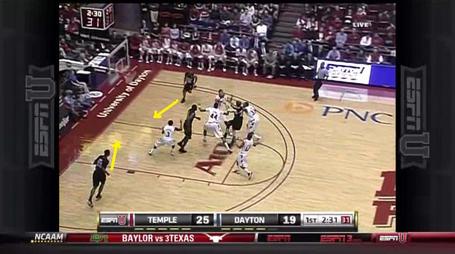 As we can see, by the time the play finishes developing, Fernandez has not one, but two options of relatively open players he can hit for easy looks. The ball is distributed to Moore who converts the easy two points - textbook. Again, Temple doesn't play remarkably fast and transition possessions - though the second most prevalent in their offense - account for just 13% of their touches. They just happen to be among the most efficient teams in the country scoring in this manner.

Above all else though, Temple is a jump shooting team first and foremost. Over half of the Owls shot attempts are jumpers, they finished second in the A-10 with a 38% mark from beyond the arc, shoot well off the dribble and are among the best mid-range shooting teams in all of Division 1. What makes life tough for opposing teams is how many players are capable of spotting up and beating teams either in catch and shoot scenarios or by putting the ball to the deck. Fernandez, Moore, Wyatt and Randall all accounted for between 16% and 18% of the team's total spot-up possessions and all ranked in the top one-third nationally in regards to efficiency according to Synergy Sports Technology. Wyatt scorched the nets to the tune of 42% shooting from the beyond the arc, with Moore and Randall reaching the upper 30's with their strokes, though it was Moore who has made the most significant improvements. After going just 13-of-61 from the outside his first two seasons, he hit over 38% of his 107 attempts as a junior. One thing that has gone a long way to improving his numbers here is the work that Moore does moving without the basketball. 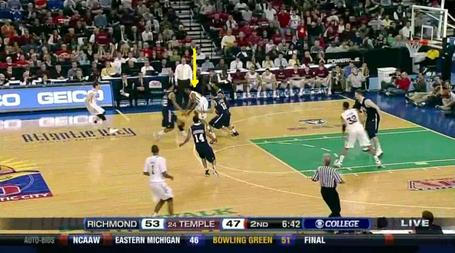 Let's look at another example on the court, this time from the Atlantic-10 Championship game with Richmond. Moore crosses half court with the ball and drawing a double from the defense quickly leaves the ball with Fernandez. 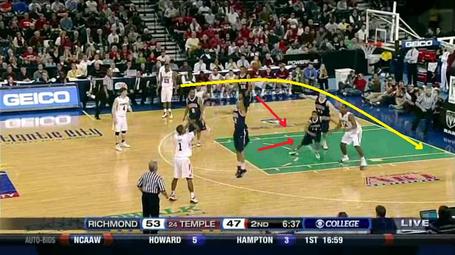 As the action rotates to the other side of the floor and the ball is entered into the right block, the defense's attention is naturally drawn to that side of the floor. This is where Moore has shown the ability to pick teams apart. With everyone facing the near side of the court and the junior suddenly left alone on the wing, he cuts along the baseline to the right corner. 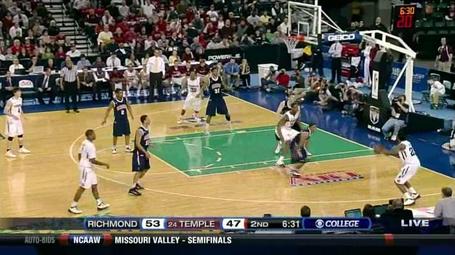 The end result is Moore slipping through unnoticed, the ball is delivered and he has a wide open look from three. With as many perimeter threats as the Owls have, even with his already established reputation, Moore will be able to pull this maneuver quite frequently next season.

As we've mentioned, Fernandez and Randall will be the other two pieces of the puzzle in the backcourt. Fernandez had an up and down junior season after busting onto the scene as a sophomore, with that said, he came on strong in the back end of the season, showing his big game abilities. He is at his most efficient scoring in spot-up and isolation sets, shooting over 37% in both play-types, but beyond that he shows a nice ability to facilitate offense for others. In the pick and roll it's almost a 50-50 breakdown between looking for his own shot and passing to others, but he is remarkably more efficient when looking to distribute, the same can be said for iso sets. Fernandez ranks in the top 25% nationally in points created out of isolation, with teammates scoring better than .92 points per possession on the shots he creates. This becomes even more pronounced when the pick and roll, teammates shoot a tremendous 54% on the scoring opportunities he creates.

Randall, simply put, is tremendously efficient. Though recording just a 9.7% usage rate, he ranked in the 96th percentile in scoring efficiency in the country, scoring over 1.1 points per possession for the season. He's a tremendous gunner in his limited sample size, with over 80% of his total shots being categorized as jumpers, with Randall netting a 56% adjusted field goal percentage on these attempts. Should he continue to shoot as well as he has in the past given the presence of Fernandez and Moore on the court, he has the potential to really burn opposing defenses.

Wyatt, Eric and Rahlir Jefferson will all be contributors on offense as well. Wyatt was almost as efficient as Randall last season, ranking in the 92nd percentile utilizing the points per possession metric. Truth be told - and granted it's a limited sample size - he excelled in every single play-type last season, proving the most potent in spot-up and transition sets, a good thing given these are his two more prevalent means of getting shot attempts. Eric operates primarily in the post given his 6-foot-11, 240-pound frame, and shot a very respectable 44.1% on touches inside last season. He's also shown a nice ability to face up and score as a catch and shoot player, hitting a remarkable 63% of his shot attempts in this scenario. Lastly there's Jefferson, overall an average scorer, but an excellent finisher on the break, converting an almost unheard of 75% of his shot attempts on the break, ranking in the top 18% in the country at 1.27 points per possession.

Incoming freshman Will Cummings could see some playing time as well off the bench. The 29th ranked point guard in the country, the diminutive 6-foot floor general plays with lightning speed and quickness but always seems to be under control with the basketball. He will be a welcome addition to the transition game.

Defensively this is a very strong team, ranking in the top 40 teams nationally in scoring efficiency against, proving one of the best two-point field goal defenses around. They really get after shooters inside the arc, ranking as one of the top teams in the country at defending both short and mid-range jumpers, limiting teams to less than 30% shooting here. They do tend to have their struggles at limiting opposing perimeter shooters however, ranking 11th in the conference in opponent three-point field goal percentage. Again, Allen was this teams best defender overall, but Fernandez, Moore and Jefferson are all quality, while Eric in limited time has proven very effective inside. If he really steps things up, he can be a game changer inside.

There is a real potential here for Temple to exceed what it accomplished last year. Whether than means leapfrogging a very good Xavier team in the conference or advancing beyond the round of 32 in the NCAA Tournament, both are certainly in play. The good times will continue to roll in Philadelphia.