As the Texas A&M coaching search continues to swirl, Brent Zwerneman continues to be the go-to source for information regarding the latest rumors. According to the Houston Chronicle/San Antonio Express-News reporter, Murray State's Billy Kennedy is the latest target for the Aggies. 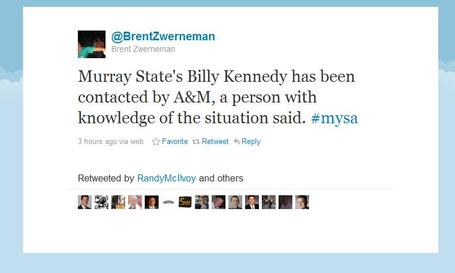 None of this should really come as a surprise to anyone. Kennedy is relatively young (47), has guided the Racers to a pair of postseason tournament appearances and an NCAA Tournament win in the past two years and generally been regarded as a guy who knows how to rebuild a program. Keep in mind, prior to his current run at Murray State, Kennedy helped get Southeastern Louisiana to the NCAA Tournament as well, easily his most impressive accomplishment to date.

Granted, the Aggies are nowhere near where Murray State or Southeastern Louisiana were when Kennedy took over, but that's a good thing isn't it? Shouldn't a coach known for his ability to build winners out of thin air be able to achieve big things in the Big 12 with greater resources and recruiting power? It's also worth noting that as a Louisiana native, Kennedy grew up not all that far from College Station, Texas.

Things remain in the preliminary stages according to reports, just the simple fact that contact has been made. But Kennedy is certainly deserving of a chance to move up to a bigger program given his resume and the Aggies might be the team.