The Spiders are riding the wave of the best two-year stretch in program history. Richmond has posted back-to-back 25-win seasons, a pair of NCAA Tournament appearances, the second Sweet 16 run ever for the school and has finished ranked in the final national polls in each of the last two years. Yes, it's the best of times for the former CAA giant killer turned Atlantic-10 mainstay. The question now, is can they keep the momentum going?

Head coach Chris Mooney was signed to a much deserved contract extension that will keep him with the program for the next decade, but now he may be faced with his toughest task since taking over the team. As good as Richmond has been of late, the chief individuals responsible for that are now moving on. Gone is dynamic guard Kevin Anderson. So long to sharpshooting big man Justin Harper who will be on an NBA roster when the next season begins. The list goes on from there as we'll see.

Yes, 2012 could be a rocky year as the Spiders try to cope with heavy losses, but with Mooney at the helm, the rebuilding process should be a smooth one.

With all due respect to Richmond fans, the biggest story at this juncture has to be how far will the Spiders fall? Many of the A-10's elite are returning talent in large numbers, meaning Richmond will be trying to reload while everyone else is pushing forward.

We already know about Anderson and Harper, two players that made up nearly half of Richmond's offense last season, and are nearly irreplaceable over the course of one offseason. Other departures include big man Dan Geriot, and forwards Kevin Smith and Kevin Hoyde. In all, the Spiders lose their top three scorers, top two rebounders and two best perimeter shooters. As you'll see in the chart below, the losses are massive. 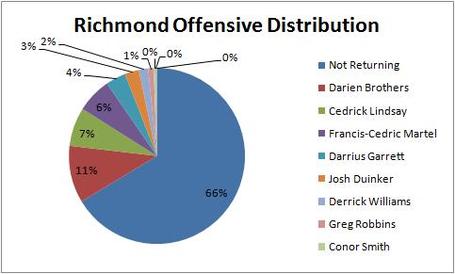 So where does this team go from here? The Spiders identity last season was a team noted for its ability to protect the basketball and bury opponents from the outside. Richmond had the 11th lowest turnover rate in the nation and the 16th highest three-point shooting percentage, made all the more deadly when you consider 54% of the teams shots were jumpers according to Synergy Sports Technology. Of course, featuring five players who shot better than 38% from beyond the arc will do that for a lineup. Furthermore, the Spiders understood how to capitalize on opposing defenses concerns with their shooting to break them down in other sets as well. Utilizing the points per possession metric, Richmond ranked in the top 20% nationally in iso's, cuts off the ball and the pick and roll. Still, the Spiders do return some efficient scorers, however, they'll be pressured to maintain that efficiency as their usage rates increase.

Guard Darien Brothers is the lone returning player who saw a double-digit usage rate last season and managed 1.01 points per possession, the second best mark on the team. The 6-foot-3 junior is a perimeter terror, shooting nearly 41% from beyond the arc, unsurprisingly most of which come from spot-up scenarios. In all, Brothers saw nearly two-third of his total possessions come in spot-up scenarios where he produced an adjusted field goal percentage of just under 60%. This undoubtedly was a result of the presence of stars like Anderson and Harper on the floor who kept pressure off of the rotational players on the court. While defenses will key in on Brothers more consistently this season, Richmond has shown some tendency to get him the basketball coming off of screens, something they will likely do more of this season. Let's look at a simple example. 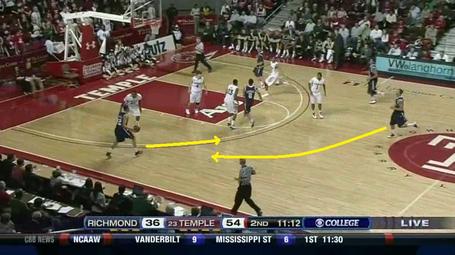 In this set, taken from a meeting with Temple, the ball is on the left wing being dribble towards the top of the key as Brothers dives down from near mid-court. 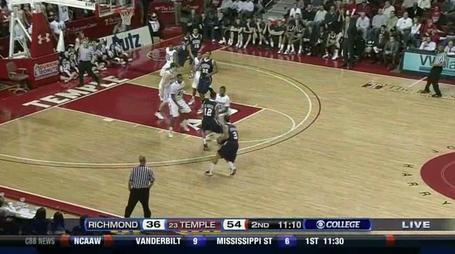 As Brothers rotates behind the ball, Kevin Smith hands it off and simultaneously screens the defender, leaving Brothers with an open look from the perimeter. It's a simple play, but one that works quite effectively as the junior guard has a quick release on his shot. He's also proven to be much more effective as a catch and shoot player rather than creating his own shot off the dribble, so this seems like a logical set for Richmond to run on a consistent basis to get him open looks.

Following Brothers, the Spiders next most potent returning weapon is 6-foot-6 forward Francis-Cedric Martel. The senior from Montreal had a limited usage rate of 6.4% but averaged just under one point per possession, ranking in the 82nd percentile for scoring efficiency nationally. The bulk of his touches came in spot-up sets where he produced a respectable 49% adjusted field goal rate, but by far his two best areas on the floor are moving off the ball and isolation sets, play-types where he ranks in the top 3% in the country. For a player who struggled somewhat with turnovers last season (over 16% turnover rate according to Synergy), expect ball cuts to remain an integral part of his game. Let's dive into another brief example just to show what we mean. 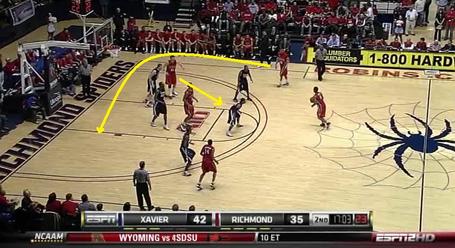 Martel starts up high on the right wing with the ball at the top of the key. As the play unfolds the post man on his side of the court flashes to the high post and Martel rotates behind the cut along the baseline. 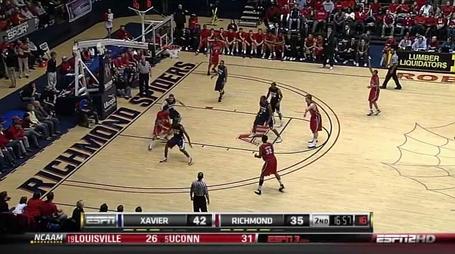 After the ball goes into the high post, it's entered into Martel on the block where he goes to work and finishes over his defender. As a junior he proved a well above average finisher around the rim, shooting nearly 61% from this spot on the floor, a mark that ranked in the top one-fourth nationally. He has the combination of size, length and agility that make him a difficult match-up when moving well off the ball.

From there, things become significantly more uncertain. Guard Cedrick Lindsay is the only other returning player who had more than 100 touches last season (7.1% usage rate) and was overall just an average scorer. He struggled in transition and when forced to isolate as turnovers plagued him in both of these settings. Lindsay did however perform well when operating in the pick and roll, though he struggled when opting to pass off to teammates. Forward Derrick Williams showed some promise during his freshman season, scoring effectively on his limited post touches and hitting the offensive glass hard. Increased production from him will be paramount in 2012.

It's likely that the Spiders will need immediate contributions from their incoming freshmen class as well which features four newcomers. Power forward Luke Piotrowski is the gem of the group, standing 6-foot-11 and ranked as the 53rd best player at his position in the country. In many ways he reminds of Justin Harper, possessing an inside-out set of skills with an excellent shooting touch. Setting the bar that high may be unfair for the freshman, but the similarities are undeniable. Alonzo Nelson-Ododa, another power forward, settled on Richmond after flirting with North Carolina State and Cal, while shooting guard Trey Davis has a solid shooting stroke and has earned a reputation as a hard working glue guy.

Defensively the losses are just as heavy as they are at the other end of the floor. Based on points per possession allowed data from Synergy Sports, only Lindsay and Martel return as above average defenders who saw a significant amount of plays defended. Darrius Garrett however did show some flashes in this regard as well, despite defending only 6.5% of Richmond's total possessions last season. The 6-foot-9 forward allowed just .62 points per possession on 25% shooting, a tremendous effort. He bodies up well on the block and has a surprising ability to defend in iso and pick and roll sets, playing angles very well. Richmond did struggle on the defensive glass somewhat last season and with the losses inside, it will be necessary for the Spiders to get added effort from their frontcourt inside.

Ultimately on paper, this team doesn't appear capable of continuing Richmond's streak of NCAA Tournament appearances to three. This isn't to say the Spiders are doomed to tumble to the Atlantic-10 cellar in 2012, but a regression to the middle of the pack seems very likely. Chris Mooney is a good coach and he has some talented players returning, but it will likely be another season or two (barring these players overachieving) before Richmond is battling for the top of the conference again.