Murray State head coach Billy Kennedy emerged as a viable candidate for the Texas A&M job in the last 48 hours and it looks like things are starting to advance quickly. Shortly after it was learned that former NBA coach Jeff Van Gundy was ruled out as a possible replacement for departed coach Mark Turgeon, a report from Joshua Parrott of the Daily Advertiser stated that Kennedy was in fact on his way to meet with the Aggies about the position. 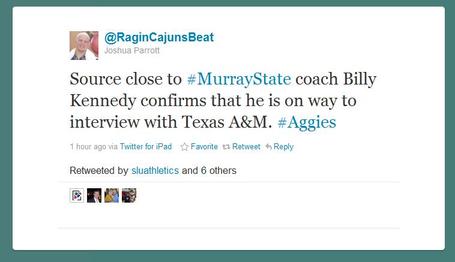 Since his name first came up Kennedy has been one of the favorites for this position, with Northern Iowa's Ben Jacobson running a close second as far as non-BCS suitors. In light of other recent reports that Nebraska's Doc Sadler has in fact not been contacted by Texas A&M, it appears as though the Racers head man as emerged as the new favorite for the job. This would undoubtedly be a blow to Murray State but a great get for the Aggies if they can in fact land Kennedy.

Again, at this point it appears as though Kennedy will be meeting with Texas A&M officials, but no word about any kind of offer has surfaced as of yet. Stay tuned for more information as it becomes available.