Update 10:05 AM CDT: According to Billy Liucci of the Maroon & White Report Texas A&M will meet with Ben Jacobson this weekend in addition to Billy Kennedy for the vacant head coaching position.

As the search for a new head coach at Texas A&M enters its fourth day, reports seem to indicate that the Aggies have narrowed their search for Mark Turgeon's replacement to a pair of non-BCS coaches: Billy Kennedy of Murray state and Northern Iowa's Ben Jacobson. The school made a push for former NBA head coach and current ESPN analyst Jeff Van Gundy, but ultimately JVG decided the college game wasn't for him.

Other potential candidates including Nebraska's Doc Sadler and North Texas' Johnny Jones allegedly haven't been contacted by A&M yet according to those school's athletic directors - leaving presumably Jacobson and Kennedy.

Jacobson has been considered a rising young coach since leading UNI to a Missouri Valley Conference championship during the 2008-09 season. In the last three years under his leadership the Panthers have won a pair of MVC regular season and conference tournament titles, earned three postseason berths and reached the Sweet 16 in 2010 following an upset of Kansas. Following that run in the NCAA Tournament, Jacobson received a 10-year contract extension. While his name has been rumored to be in the mix for Texas A&M from the outset, it picked up significant steam yesterday thanks to multiple reports that he was now being considered as a serious candidate for the job. Not long after the initial reports surfaced, Billy Liucci of the Maroon & White Report tweeted this: 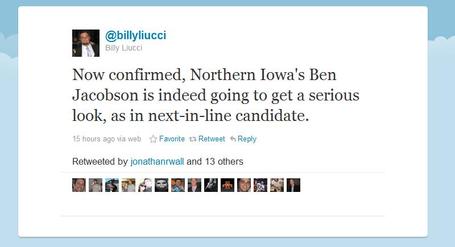 The Racers Billy Kennedy according to reports either has or is expected to meet with the Aggies to discuss the head coaching vacancy. Kennedy has been labeled a coach capable of rebuilding programs with great success - not a task he will have to accomplish at Texas A&M - but a mark of success nonetheless. While Jacobson's name has gained steam, many still consider Kennedy the safe bet to ultimately be the new hire in College Station. Mike Jones of the Dallas Morning News penned this column late last night expressing his opinion that Kennedy will be the man for the job, but regardless, it seems as though we are moving closer to a hire being made in the not too distant future.