As the hours continue to tick by this weekend we're starting to get a clearer picture of who will ultimately be the new head basketball coach at Texas A&M. We've known for the last 36 hours or so that Billy Kennedy and Ben Jacobson were at or near the top of the list for the Aggies, with both expected to meet with school officials today. It now appears as though Kennedy is the front runner, at least if you're willing to believe what sources are telling Billy Luicci of the Maroon & White Report - he hasn't been wrong yet. 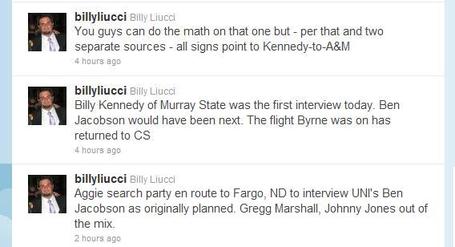 *Note: these tweets were cut and pasted together and were not displayed in this order originally.

Many have said that Kennedy was the likely favorite to begin with and seemed like he could be the best fit as well - if the order of interviews is any indication, A&M feels the same way. Still there's a chance for Jacobson to put in his two cents as well now that Northern Iowa has granted the Aggies permission to speak with their head coach, which they are currently on their way to do.

Luicci also confirmed that North Texas's Johnny Jones and Wichita State's Gregg Marshall are no longer in the running. Marshall certainly makes sense as he recently signed a new deal with the Shockers that will keep him with the program for quite some time. If A&M was absolutely hellbent on getting Marshall, early estimates stated that their offer would have to be in the realm of $1.5 million per year, a very steep price for a coach who is unproven at the BCS level to be sure.

Furthermore, Brent Zwerneman of the Houston Chronicle and San Antonio News-Express had this to report earlier today according to a source close to the situation: he would be shocked if Kennedy was not announced as the new head coach on Monday.

It looks like this one is very close to be resolved - we think. But when the weekend ends, it appears that a quality coach from outside the power conferences will be moving up to the BCS ranks.