According to a report from Anthony Wireman of AllKyHoops.com, Murray State head coach Billy Kennedy has accepted the head coaching position at Texas A&M.

I have been told by a good source that Murray State's Billy Kennedy has accepted the head coaching position at Texas A&M.

This report comes just a few hours after Houston Chronicle reporter Dave Zwerneman made a similar, yet more conservative statement.

Texas A&M has contacted a candidate for the Aggies’ basketball gig and told him Murray State’s Billy Kennedy would be the next A&M coach, a person with direct knowledge of the situation said.

The insider said A&M intended to call a press conference for Monday to announce Kennedy’s hire.

With that said however, nothing official has been decided just yet according to Billy Byrne and John Thornton. Zwerneman met them at the airport following their return from Fargo, North Dakota where they had been interviewing Northern Iowa's Ben Jacobson. Zwerneman had this to say: 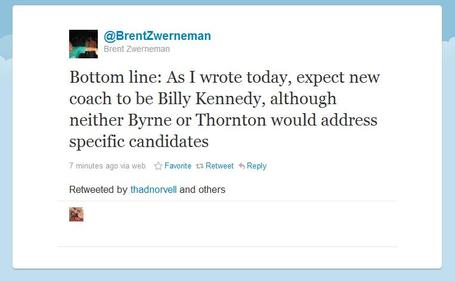 So what can we realistically say at this point? All signs point to Billy Kennedy being named as the new head coach at Texas A&M with a press conference being held on Monday. This isn't to call the early reports stating he has accepted the position false, rather, premature. The Aggies have yet to officially announce at this time, but expect word of Kennedy's hire to be released sometime in the next 24 hours.