Ron Everhart's five-year run at Duquesne has been somewhat of an up and down ride, but unquestionably it has been the best stretch for the program in a very long time. The Dukes have reached a postseason tournament each of the last three seasons, something they haven't accomplished since the late 1960's. Their 21-win season in 2009 was the first 20-win campaign since 1981 and the team's 4th place finish in the Atlantic-10 standings last year was the highest since a 3rd place showing in 1994. Yes, Everhart is earning his keep in Pittsburgh, despite often being overshadowed by larger, more prominent local programs.

The challenge now will be if the long-time head coach (entering his 18th season overall) can allow for a smooth transition of power this season. Duquesne was undoubtedly led by seniors Bill Clark and Damian Saunders with a strong supporting cast surrounding them. Newcomers T.J. McConnell (A-10 Rookie of the Year) and Mike Talley showed that they are the future for the Dukes - but is that future now?

Yes, B.J. Monteiro and Sean Johnson had higher usage rates last season - in the case of Monteiro a higher scoring average as well - but the key to this season lies with McConnell and Talley taking the next step. In many instances performing as well as they did as freshman is like playing with house money, it yields excitement, but the responsibility of carrying the team didn't fall on their shoulders. While it won't squarely be on them this season either, both will be expected to handle a heavier load.

A trio of players are moving on due to graduation, the aforementioned Saunders and Clark along with little used David Theis. Replacing the first two doesn't happen overnight. Clark finished his career as the eighth leading scorer in program history after leading the Dukes in scoring at over 16 points per game last season. Saunders is in even rarer company, becoming just the fourth player in conference history to be named Defensive Player of the Year twice. Furthermore, is the only player in NCAA history to finish his career with more than 250 assists, blocks and steals. Joel Wright also recently announced he was leaving the program following his freshman season. 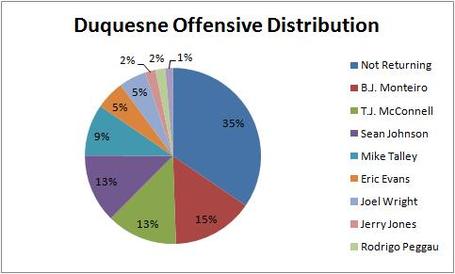 Surprisingly for two players as accomplished as Saunders and Clark were, neither commanded a huge usage rate, accounting for just over one-third of the team's total possessions last season. If Duquesne had a strength in this regard it was spreading the wealth, with five players reaching double figures in usage rate, six if you round up Mike Talley's 9.5% mark. The Dukes also return two of their three best facilitators in Talley and McConnell which should help lessen the loss of their star seniors.

This was a team that certainly felt comfortable in a run-and-gun atmosphere. Duquesne ranked 13th nationally in adjusted tempo according to Ken Pomeroy and proved to be at their most efficient in transition and spot-up scenarios. In fact, overall, the Dukes were 22nd nationally in scoring efficiency in transition at 1.178 points per possession and no school in the top 50 had a higher percentage of their touches come on the break than the Dukes 21.8%. Remember, the traditional model holds that a higher usage rate in any area tends to yield an efficiency mark that regresses towards the mean, so for Duquesne to utilize the transition game this much while still ranking so high in scoring efficiency tells you just how good they were in this regard.

Luckily for Ron Everhart, he returns some of his top finishers in transition. Monteiro, Johnson, McConnell and Tally all ranked in the top half nationally in transition scoring, with the returning senior Monteiro ranking in the 90th percentile overall. Interestingly enough, this was the one area where he really tended to excel, showing some signs in spot-up sets as well, but proving well below average in all other play-types. In fact, as a half court player overall, his scoring efficiency ranks in the bottom one-third nationally. If the Dukes maintain an up-tempo pace this season he should still manage fine, but unquestionably he needs to improve his ability to operate at a slower pace.

The Dukes are a jump shooting team, though they aren't as heavily reliant as some other programs are. McConnell is the best of the bunch in this area, ranking in the top 12% nationally in scoring efficiency off jumpers and shooting over 40% from beyond the arc as a freshman, the best mark on the team. What is somewhat interesting about his case to this point is the success he has distributing the basketball despite struggling so mightily in isolation and pick and roll sets. He was well below average in efficiency in both of these play-types and only average when incorporating his passes. Still, to have the kind of success he did despite these low points, speaks to his potential as he continues to develop. What we can expect to see more of this season from the guard is running off of even more screens. As the top returning shooting on the team McConnell will certainly see more attention from defenses, but his quick release and the Dukes tendency to run quick sets to free him on the perimeter should allow him to continue to thrive. Let's take a look at an example. 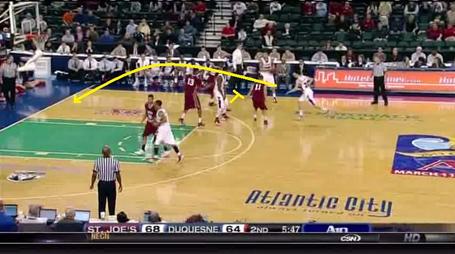 This is a simple screen and rescreen set that McConnell burns defenses on, shooting 55% on jumpers coming off of screens. After he brings the ball up court and passes to the far wing, he cuts off a screen set for him at the high post, rolling down towards the block. They key here is the action that happens away from the ball. As McConnell makes his move on the ball side, a teammate begins to rotate down to the nearside block. 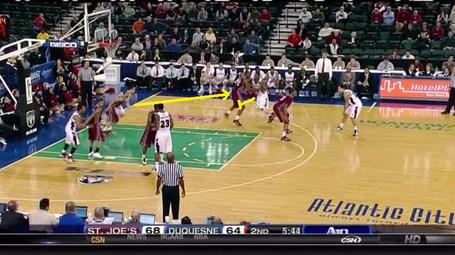 McConnell and the opposite wing get to the low block at about the same moment and the A-10 Rookie of the Year makes as if to set a screen for the other rotating wing to continue through to the ball side. With his defender now shading to the inside to provide help for this play, McConnell cuts back to the ball side wing where the high post man now sets a down screen for him. 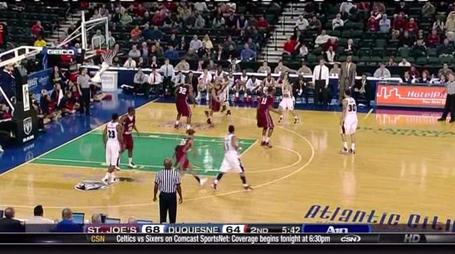 All the while, the ball has stayed on the wing and is delivered to McConnell rolling of the down screen, allowing him to fire an open look from the perimeter. As you can see by the game clock, it's a quick set that takes no more than five to six seconds to execute when run properly and it works with great efficiency.

McConnell's rookie backcourt mate Talley showed plenty of intrigue in his first season as well. Talley, a 5-foot-10 guard from Michigan, certainly subscribes to the run-and-gun mentality of the Dukes with over 60% of his touches last season coming in transition and spot-up sets, which happened to be his two most efficient means of scoring the basketball. He definitely shows some tendencies characteristic of a young guard right now: excelling as a catch and shoot player, but struggling off the dribble; proving right-handed dominant when driving; and like McConnell, struggling in iso and pick and roll sets. Still, this backcourt duo shows a lot of promise moving ahead to the future.

Returning junior Sean Johnson will be the veteran presence amongst the guards so to speak after averaging just under 10 points per game last season.Like Monteiro, he tends to be at his best when he can operate in open space, though he is an above average scorer in spot-up sets, showing the ability to catch and shoot and attack off the dribble. He actually ranks slightly higher from a national perspective finishing at the rim as opposed to when he settles for jumpers, so continuing to stay aggressive will be important for him. Johnson really shows a nice ability to cut without the basketball, easily his most efficient play-type. 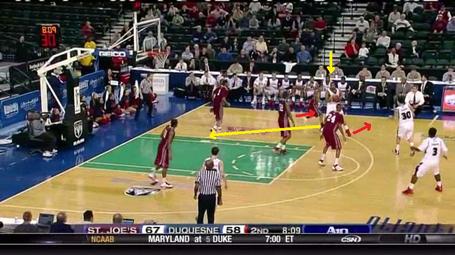 This is a basic example meant to serve as a means of highlighting the nose Johnson has for finding holes in the defense. Here he finds himself on the far wing with the ball with several defenders in the area. As he passed off to the top of they key, the defense presses up and he quickly slips through and makes a line to the basket. 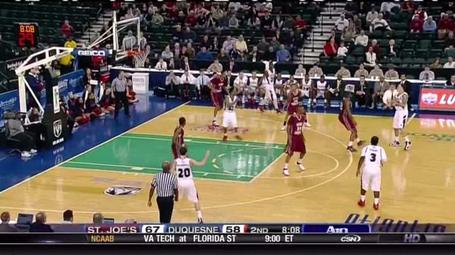 The ball is delivered to Johnson who is all alone for an easy two at the rim. Again, a simple play, but it shows the smarts he has on the floor as far as finding weak points in the defense.

The rest of the offense saw limited usage rates, with only Eric Evans finishing with a usage rate above 2% - he had an average scoring efficiencies.

The incoming freshmen class features four players, highlighted by 6-foot-7 power forward Shakore Grant. The 90th ranked player at his position according to ESPN, Grant shows plenty of upside with his athleticism operating around the rim, but will need to develop his offensive game. P.J. Torres, a New York based point guard, has a reputation as a craft ball handler with a high basketball IQ. Cheikh Fall, a junior college power forward, and Daniel Herra a 6-foot-6 shooting guard round out the class.

The Dukes had a massively disruptive defense last season, ranking in the top 50 in efficiency and number one nationally in turnover percentage. While the loss of Saunders is nearly impossible to replace, Duquesne returns many of their best players at this end of the floor. McConnell, Talley and Wright all ranked in the top one-third last season in points per possession allowed. The pressure will be on players like Johnson and Monteiro to follow after they both underwhelmed in this regard. Overall the Dukes excel at defending jump shooters and off the ball movement, but did struggle somewhat defending the post and the immediate area around the rim. The lack of size inside next season could mean more of the same.

Overall, Duquesne is somewhat of a difficult team to gauge for the 2012 season. While the Dukes top two players are gone, neither dominated the ball to the extent that the rest of the roster was a collection of bystanders. There is enough young talent in the backcourt to believe this team can be competitive again and finish in the top half of the conference.