The 2011-12 season will be an infinitely interesting one to follow in our Nation's Capital as GW begins the Mike Lonergan era. Karl Hobbs tenure with the Colonials had ups and downs, most noticeably three NCAA Tournament appearances and a pair of Atlantic-10 Tournament championships, but his ride ultimately ended after an extended run.

Lonergan takes over after serving as head coach at Vermont for six seasons, leading the Catamounts to four postseason berths during that stretch. His run with GW has already sparked some controversy, as top recruit  Erik Copes recently was released from his letter of intent with the program, only to announce his intentions of attending George Mason. Whether or not this move is resulting from George Washington's academic standards or Lonergan's decision to not retain Copes' uncle who was on the Colonials staff is still somewhat up for debate, but it's already proven to be a tumultuous start for the A-10's newest coach.

Still, GW returns a surprisingly large percentage of its production from a team that finished at 10-6 in the conference.

Does the arrival of Lonergan help push GW into the upper echelon of the Atlantic-10? Certainly the presence of a new coach alone will mean a closer inspection of the program by fans in the opening weeks, but with teams like Richmond and Duquesne likely taking somewhat of a step back from last season, the Colonials could sneak up another spot or two in the conference pecking order. It will require some players to overachieve no question, but maybe Lonergan is the man to get that additional production out of this team.

Compared to many other A-10 teams, the Colonials really aren't losing all that much. Center Joseph Katuka is gone to graduation after finishing third on the team in scoring (8.1 ppg) and third in rebounds (5.0 rpg), while recording the third highest usage rate on the team at 12.5%. From there, it's a trio of little used players. Underclassmen Chris Fitzgerald and Tim Johnson opted to transfer out of the program - all three accounted for less than 5% of GW's total possessions during the 2010-11 season. 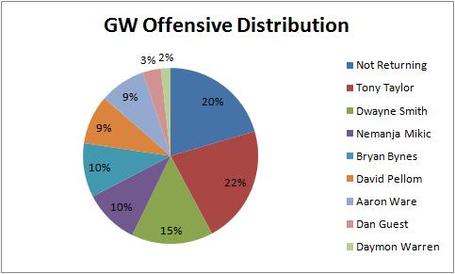 Not only do the Colonials return their top two scorers, top two rebounders and top offensive facilitator - they return six of their top seven players regarding usage rate. Yes, production may have been average last season, but this is a group that has played with one another and has played with the ball in their hands, a sudden increase in touches isn't going to suddenly throw things into a spin cycle.

The best thing you can really say about GW's offense from a year ago is that they were grinders. The Colonials were 11th in the Atlantic-10 in pace according to Ken Pomeroy and really didn't stand out in too many facets of scoring the basketball. With that said, they were the second best offensive rebounding team in the conference and got to the line quite often in relation to how frequently they shot - these are characteristics of a hard nosed team, even though they are well below average when it comes to scoring in the post.

Interestingly enough, the Colonials were at their best last season when running the break, their second most prominent means of scoring the basketball. Transition possessions accounted for nearly 15% of the team's offense, with GW ranking in the top one-fifth nationally by scoring over 1.1 points per possession. Tony Taylor and Bryan Bynes both faired well here, but it returning sophomore Nemanja Mikic is easily one of the most dangerous transition weapons in the country. The 6-foot-8 forward is a tremendous perimeter shooter and that extends to this play-type, where he scored nearly 1.5 points per possession with an adjusted field goal percentage of 84% and almost unheard of number. Simply put, the import from Serbia is a game change. Mikic shot nearly 44% from beyond the arc last season on almost six attempts per game. To put into perspective just how good he was from the outside as a rookie, consider that based on data from Synergy Sports, for players who attempted at least 130 three-pointers last season, he ranked 38th in total efficiency. With Mikic on the floor, GW can spread out opposing defenses, there's no question.

We know Tony Taylor is going to have the ball in his hands most often - as the team's leading scorer and distributor last year this is a given. The returning senior is above average in scoring efficiency, tending to have his most success when he can improvise with the basketball - it's a telling sign that he was at his best in transition, pick and roll sets and moving off the ball, he has good quickness but is also a crafty player. Even as the team's top facilitator, Taylor definitely looks for his own shot first in most cases and really excels when he gets in between the two layers of the defense, ranking in the top 5% in the country in converting on runners in the lane. Still, it's the aforementioned craftiness that sets him apart from his teammates at this point - let's look at an example to better illustrate this. 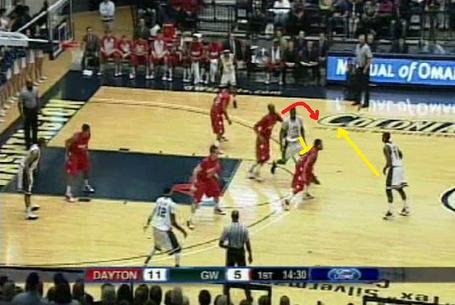 In this meeting with Dayton during the regular season, Taylor is working at the top of the key with the ball. A teammate sets a screen for Taylor to come off going to his right (he prefers going this direction), but as he starts to make his move, the screener's defender comes with a strong hedge - this is where Taylor shows his smarts. 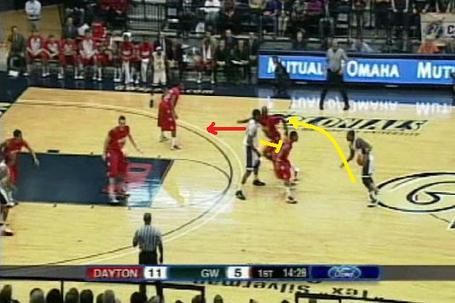 Rather than forcing the issue by either a) trying to turn the corner and leaving himself susceptible to a turnover or b) taking such a angle that the purpose of the screen is negated, Taylor resets the play with a quick dribble. This allows his teammate to set a second screen on his man while the additional defender retreats with his head turned away from the ball after his hedge. 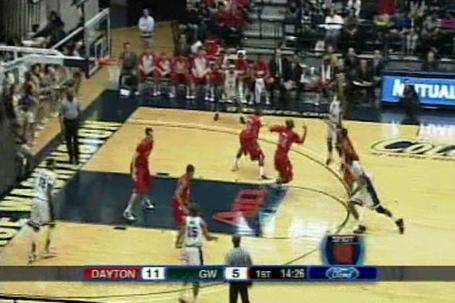 Taylor follows right behind the retreating defender who doesn't realize what has happened until Taylor is already free and pulling up just inside the arc for an uncontested jumper. Now as we all know, a long two-point attempt isn't the most efficient shot choice, but this play is meant more to illustrate the solid pace that the guard operates with out of these sets.

Forward Dwayne Smith was the number two option for GW last season, chipping in nine points and five rebounds, but was only average in regards to his efficiency with the basketball (.77 points per possession). In general, the returning junior was average across the board, save for spot-up scenarios where he faired slightly better.The key for Smith is avoiding getting stuck in a situation where he has to shoot off the dribble, something he doesn't really excel with. He primarily operates as a catch and shoot player in this scenario, converting just over 41% of his shot attempts, but is even better when he chooses to attack the rim. Smiths ranks in the top one-third nationally in scoring efficiency when choosing to drive to the basket, scoring better than one point per possession with a remarkably low turnover rate of 4%.

The remaining primary pieces of the offense returning to the Colonials include Bynes, David Pellom and Aaron Ware. The trio accounted for approximately 27% of the offense last season with Pellom proving the most efficient of the three by a wide margin. The 6-foot-8 forward doesn't do anything particularly extraordinary at this end of the floor, he just knows how to move without the basketball. Nearly half of his possessions come from ball cuts or in transition, where he shoots well over 60% in both scenarios. Like Pellom, Bynes is at his best in transition as well, while Ware has proven to be a strong isolation scorer when he can bare down on his man at the top of the key.

Where the Colonials have the potential to go from middle of the pack to very strong however is with the return of guard Lasan Kromah due to a foot injury that kept him sidelined all of last season. The 6-foot-5 junior primarily operated in spot-up and transition scenarios during his rookie season, with those play-types accounting for over 60% of his total possessions. Assuming he is back to full strength, Kromah is likely the most versatile scoring option for the Colonials, operating well off the ball, proving equally as apt as a catch and shoot player as he is firing off the dribble, while also finishing well at the rim. He and Taylor could form one of the better backcourts in the conference if both are hitting on all cylinders.

The Colonials freshmen class currently consists of two recruits - we'll see if this holds - in power forward Jonathan Davis and point guard Trey Davis. The 6-foot-7 Jonathan Davis is a top 100 player at his position with good length and a steadily improve face-up game, though his athleticism is still somewhat of a question mark. Trey Davis drew interest from Sam Houston State and North Texas due to his handles and scoring ability before going with GW. He is very much a shoot first player at this point, so transitioning more to being a true point guard will certainly make him a valuable contributor.

Defensively, George Washington faired significantly better than they did offensively, ranking in the top one-third in opponent scoring efficiency and proving to be among the best transition defenses in the country. They key to the Colonials game was forcing a high rate of turnovers, though this tendency to gamble left the susceptible on the perimeter, where they allowed opposing teams to shoot 36.5% (281st in the country). The good news? The Colonials return their top two most efficient defenders in Dwayne Smith and Nemanja Mikic. Big man Jabari Edwards will also be back after leading the team in blocked shots and receiving a medical hardship waiver for knee surgery in 2007. The bad news? Everyone else on the roster is pretty average and that's with relatively even usage rates as far as number of plays defended.

Whenever a new coach takes over there are inevitably going to be a lot of questions heading into the season - GW is no exception. The Colonials do have a chance to maintain their high standing from a year ago given the loss of talent many other A-10 teams have to deal with and the experience level this team will have. No, a conference championship isn't in the cards, but earning a top four or five seed in the conference tournament come March certainly is.