As quietly as it can be done, Rhode Island has put together four straight 20-win seasons, of course it hasn't been all good times in Kingston. The Rams have been somewhat inconsistent in the Atlantic-10, finishing 9th, 2nd, 5th and 6th during that run, though finishing above .500 three out of four years.

Despite four straight postseason tournament berths, URI fans have to feel at least somewhat frustrated by their teams tendency to start fast, but slow considerably in conference play. Consider that since the 2007-08 the Rams have gone 54-18 (.750 winning percentage) in non-conference games, but just 36-28 (.563) against A-10 competition - still solid, but obviously a drop-off in execution.

Long time head coach Jim Baron will have his work cut out for him like never before this season. URI suffers massive losses and will have to rely heavily on a promising freshman class in order to continue its reason run of success and postseason play. It won't be an easy task.

How do the new pieces fit in and how quickly can they make contributions? The Rams return just one player who had a significant usage rate last season. With that said, this is one of the most anticipated recruiting classes ever at Rhode Island, with three players ranked in the top 100 nationally at their position arriving on campus this fall. Toss in Auburn transfer Andre Malone and this influx of new talent exudes potential - will it be realized in 2012?

The losses are heavy - very heavy. Rhode Island loses three-quarters of its total possessions used from last season, with three of their top four scorers and top two rebounders moving on. Delroy James is lost to graduation after a big season in which he posted averages of over 17 points and 8 rebounds per game. Marquis Jones was the teams top offensive facilitator, while Will Martell hit the glass hard, averaging better than 5 rebounds per game in 21 minutes of action. The move that hurts the most is sophomore Akeem Richmond deciding to transfer out of the program after showing some promise last season as the third most utilized player for the Rams offense. Daniel West is also out of the picture following his withdrawal from URI in the middle of last season. 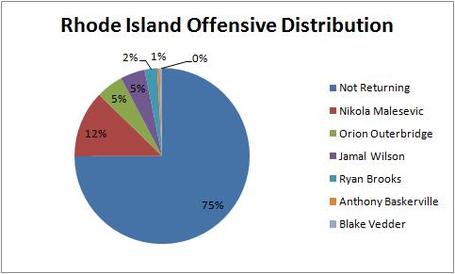 Attempting to predict what the Rams will look like at either end of the floor next season is akin to describing the plot of a movie that hasn't been watched - you can make slight assumptions based on small snippets of information, but ultimately you just have to wait and see. Nikola Malesevic is the only returner who was a significant part of the offense as far as usage rate (12.3%), luckily for Rhode Island he's a dangerous weapon.

The 6-foot-7 forward from Serbia is a deadly shooter, hitting on nearly 46% of his shot attempts from beyond the arc, making him one of the most efficient spot-up players in the country. He's off the charts as a catch and shoot threat, averaging more than 1.3 points per possession and when he opts to drive out of spot-up scenarios, he ranks 23rd amongst all Division 1 players in effectiveness. Still, his true value at this point has been finding open space on the perimeter and burying opposing defenses who don't manage to keep track of him. One way in which URI manages to get him open looks is through the basic principle of utilizing him as a screener to draw the attention of the defenders towards a decoy player. Let's take a look at an example. 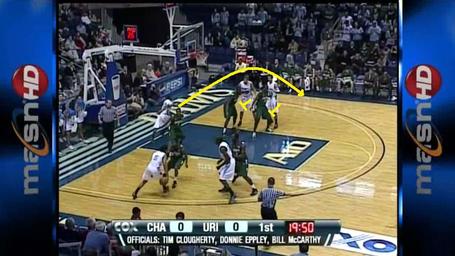 In this set the ball located at the near side wing as a double screen is set on the opposite block for a shooter curling along the baseline. Make note that Malesevic is the top screener on this stack - this is key. 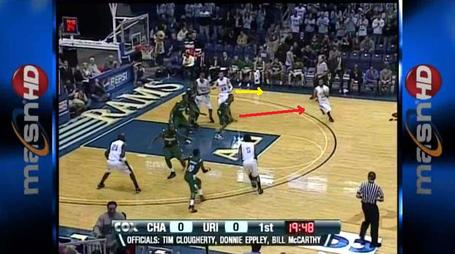 As Malesevic's teammate clears the screen and curls up towards the wing looking for the ball he pulls an additional defender up to the perimeter. In the confusion of the play Malesevic is able to back pedal out to the far wing and spot up uninhibited. 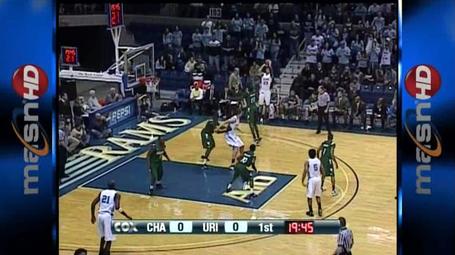 The result is a wide open look from the wing, one that the returning junior rarely misses.

From there the offense becomes a lot of assumptions and guesses based on limited sample sizes. Returning senior Orion Outerbridge was highly productive in a relatively tame amount of playing time last season. The big man shows a nice ability to face up and fire, shooting a remarkable 60% on mid-range jumpers last season. He has the ability to stretch out defenses with his versatility. With that said, he operates well finishing around the rim as well, ranking in the top 25% nationally in this regard when utilizing the points per possession metric. His post game has developed, he moves well off the ball and shows good hands catching the basketball in pick and roll scenarios. Can he maintain this level of efficiency with a higher usage rate? That will be the question surrounding many of the returning Rams players this season.

After that, it becomes even tougher to decipher who could do what next season. Jamal Wilson excelled as a catch and shoot mid-range player, but didn't bring much else to the table offensively. Ryan Brooks finishes well in transition and on the offensive glass, but again was much of a scoring factor last season. Returning big man Blake Vedder presents plenty of intrigue as a 7-foot-3 center that moves well (thanks to a soccer background), but is unquestionably a project player and will remain as such for the foreseeable future.

Out of this massive incoming freshman class, the trio of Jonathan Holton, Trahson Burrell and Dominique McKoy come the most highly touted by many of the scouting services. Holton, a 6-foot-9 power forward out of Miami, is your classic face-up big man, possessing the length, athleticism and skill to be a match-up problem for opposing teams as he continues to develop. Burrell is another versatile forward, but definitely much more perimeter oriented. He can shoot from the outside, is a well above average athlete but is an inconsistent player at this point. If Baron can reign him in, he can become a productive player almost immediately at the collegiate level. Then there's McKoy who could be the sleeper of the bunch. He comes from the famed Atlanta Celtics AAU program and has a nice inside-outside game to complement his ability to defend multiple positions.

Auburn transfer Andrew Malone will provide a spark offensively thanks to his shooting prowess. The 6-foot-5 wing operates well as a catch and shoot player as well as pulling the trigger off the dribble, but his game tends to be somewhat limited to that at this point. Developing the ability to score out of other play-types would make him a bigger threat and he may get the chance to do that fairly early with the Rams.

Defensively, URI was a strong team last season, particularly on the perimeter where they held opponents to 30.1% shooting from beyond the arc, the 11th best mark in the nation and tops in the Atlantic-10. From an efficiency standpoint, Malesevic is the teams top returning defender, though he struggles to fight through screens and doesn't close out particularly well on shooters at times. His size however gives him the potential to be a disruptive presence here. Ryan Brooks plays aggressively at this end of the floor as well, but after that there is simply too limited of a sample size to make an accurate prediction.

Overall, Rhode Island is likely the biggest question mark in the Atlantic-10 this season. The combination of massive turnover and youth means we could be well into the season before the identity of this team starts to take shape. Previously underutilized veterans and rookies alike will have to play significant roles on the floor next season if URI wants to continue its string of 20-win seasons.