It's been an arduous climb back to respectability for St. Bonaventure under 5th-year head coach Mark Schmidt - but it's been a climb nonetheless. Since taking over the Bonnies the former Boston College player has taken the program from 8-22 and dead last in the Atlantic-10 in his first season, to 16-15 mark and an 8th place finish last year. Beyond simply producing the first winning record for the school since 2002, Schmidt was able to achieve that mark with a roster that features very little turnover.

Expectations in western New York may be higher going into the fall of 2011 than they've been in a very long time - and deservedly so. Can the Bonnies challenge for an Atlantic-10 championship? No, the bar unquestionably will not be set that high. But after increasing their conference win total each of the last three seasons and on the heels of their first postseason tournament appearance in years, it's certainly plausible St. Bonaventure could take another step forward in 2012.

Is it as simple as how high can the Bonnies climb this season? Yes and no. There will be plenty of underlying plots this season, not the least of which is how much higher can Andrew Nicholson take his game in his final season with the program. Ultimately though, after a steady ascent, fans are ready for St. Bonaventure to see their team take a step beyond being a .500 program.

Not all that much - in fact the Bonnies return as much production from last season as any team in the Atlantic-10. Of course, the team isn't without total loss. Guard Ogo Adegboye is gone following graduation, taking his 11.5 points, solid perimeter shooting, but most importantly his talents as an offensive facilitator. St. Bonaventure has a talented floor general joining the program this fall, but we'll get to that a little bit later. 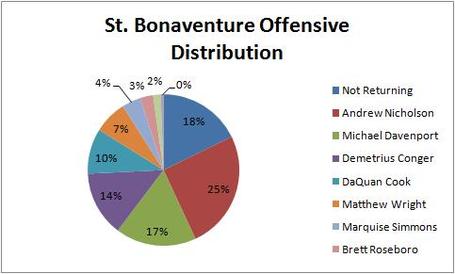 This offense starts and finishes with Andrew Nicholson who ranked in the top 40 nationally in usage rate and in the top 10% in scoring efficiency. The 6-foot-9 forward is coming off a monster junior season in which he averaged better than 20 points and 7 rebounds on 57% shooting. It may be difficult for him to top those numbers in his final year at the college level, but if he can continue to produce at a high rate, it will unquestionably open up things on the perimeter for his teammates.

He scores pretty efficiently across the board, operating primarily in the post (40% of the time according to Synergy Sports), but shows a nice versatility at the offensive end, capable of catching and shooting from mid-range in addition to attacking off the dribble. Certainly a player of his size with this kind of a skill set in the A-10 is going to present match-up problems on a nightly basis, but one of his biggest assets remains his ability to carve space out in the paint. Let's take a look at an example. 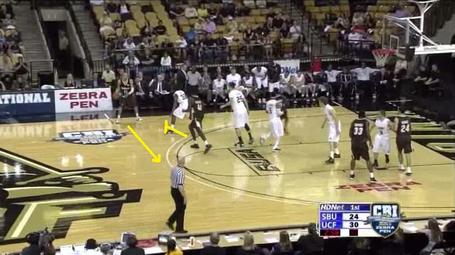 The action picks up with the ball on the far wing and Nicholson flashing high to set a screen for his teammate. Interestingly enough, for a player who moves well off the ball and excels scoring around the rim, only does St. Bonaventure not run a lot of pick and roll sets utilizing their frontcourt star, but when they do, he struggles to score consistently as a role man, ranking in the bottom one-third nationally out of this play-type. 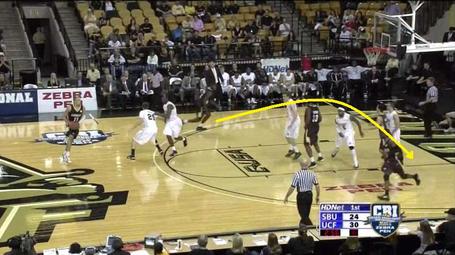 As the ball starts to swing around to the opposite side of the court Nicholson shows his ability to find weak points in the defense. The attention is focussed on the near side of the floor near the perimeter - this is where the basketball is and is heading. The big man rotates underneath the defense along the baseline. 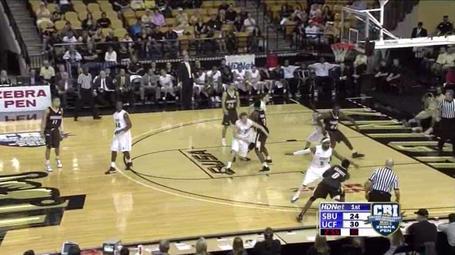 By the time the ball reaches the near wing, Nicholson has already established position right at the basket and has sealed a defender on his back, allowing for a seamless entry into the post. Once he gets this kind of position inside, it's almost an automatic basket or trip to the free throw line.

Overall this is a fairly strong offensive team, ranking fourth or higher in the conference in scoring efficiency, two-point field goal percentage and three-point shooting. The one major issue? Turnovers were an issue for the Bonnies, with more than 20% of all possessions resulting in a giveaway, the third highest mark in the A-10. Post-up derived possessions prove to be the most beneficial with St. Bonaventure ranking in the 86th percentile in the county in scoring efficiency here with Nicholson carrying the bulk of the load, but Brett Roseboro operating well with his limited touches as well. The presence of interior scoring opens up the perimeter and the Bonnies typically take advantage, producing an adjusted field goal percentage of 46% on jumpers and ranking in the top one-third nationally in scoring efficiency on both mid-range and three-point attempts.

Perhaps no player benefits more from this than Demetrius Conger. The 6-foot-6 swingman was the teams top perimeter shooter last season (40%) and the second most efficient scorer behind Nicholson. Conger's game is built around his jumper, accounting for more than half of all shot attempts and proving one of the deadliest in the nation. He shoots 42% on all attempts with an adjusted field goal percentage of over 61%, a mark that ranks him in the 96th percentile overall. What makes him a particularly tough cover is his ability to operate as a catch and shoot player, or create scoring chances off the dribble (he's actually slightly move efficient on the move). The rest of his game is somewhat limited at this point, as Conger doesn't really standout in any other play-type, but given his tremendous shooting prowess, he hasn't needed to. The one major gripe at this point in his development is holding onto the basketball, as last season Conger turned the ball over on nearly 25% of his possessions.

Guard Michael Davenport is coming off a solid season in which he contributed 11 points and 5 rebounds. The Cincinnati native is at his best when the Bonnies are able to get him in motion. As far as efficiency is concerned, he excelled in transition and working via hand offs, scoring better than one point per possession in both play-types. With that said though, the bulk of his touches came in spot-up scenarios where he was average overall, but performed well enough in catch and shoot scenarios from beyond the arc that he was able to keep opposing defenses honest.

Da'Quan Cook and Matthew Wright were the other primary users of possessions for St. Bonaventure last season, (both with usage rates over 7%). Cook, the 6-foot-9 forward, moves well off the ball, is an above average finisher off the pick and roll and was in the top one-third nationally at scoring efficiency in transition. While he isn't necessarily the top option when the Bonnies choose to run the break, having a big man with a nack for scoring on the break doesn't hurt. Wright had a solid freshman campaign relying almost solely on his jumper (over 75% of his shots) as a means of scoring. As a spot-up shooter he was just above the median for all collegiate players in scoring efficiency at .913 points per possession, proving to be slightly better at shooting off the dribble than operating as a catch and shoot player.

Marquise Simmons showed some promise inside for a young frontcourt player, moving well off the ball and finishing easy looks inside from offensive rebounds. The remaining returning names on the roster played minimal roles in the offensive attack.

The Bonnies recruiting class is modest, but the addition of a trio of shooting guards including JuCo transfer Chris Johnson will provide depth in the backcourt.

Defensively St. Bonaventure struggles a great deal, ranking in the bottom one-third in the conference last season in almost every major defensive metric, including efficiency, turnovers forces, opponent offensive rebound rate and two-point field goal percentage allowed. They do excel at defending the post, limiting opposing teams to just .77 points per possession here, landing them in the 87th percentile nationally. Nicholson's presence is a big reason why as he ranked as the team's best defender last year from an efficiency standpoint, while also defending the third most plays. Wright, Cook and Simmons are the only other players returning with above average defensive efficiencies, but all were at the lower end of the team spectrum as far as how often they were called upon to make stops. Doing a better job of defending plays in the paint that aren't designated as post-ups will be paramount to the Bonnies taking a step forward in 2012, they were among the worst teams in the country defending inside of 17 feet.

Overall there is reason for optimism at St. Bonaventure - the question now is have the Bonnies reached their peak? Given the recent history of the program some would say another .500 season would be cause for celebration, but others are thinking higher to a possible top five standing in the Atlantic-10 by seasons end. Chances are, the Bonnies fall somewhere in the middle.