Following the departure of Billy Kennedy to Texas A&M, Murray State was left trying to fill a pretty big void in their coaching staff - it looks like they've found they're man.

According to multiple reports, including CBSSports.com, assistant coach Steve Prohm will be announced at the Racers new head coach later on this afternoon at a press conference. Evan Daniels of Scout and Ricky Martin of the of the Murray Ledger and Times were among the first to report the news. 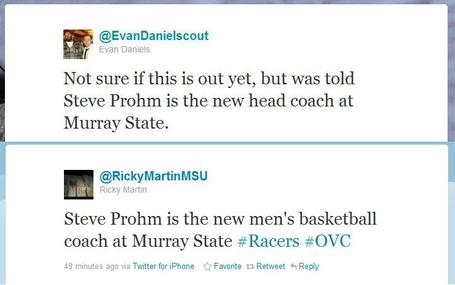 Prohm is a long-time assistant under Kennedy, having served with him for two seasons at Centenary, six seasons at Southeast Louisiana and most recently as his top assistant for five years at Murray State. Prohm also spent one year serving on Tulane's staff in 2005. This will be his first head coaching position and he'll be taking over a Racers team that has made some waves nationally in recent years, highlighted by a 2010 NCAA Tournament win over Vanderbilt in the first round.

His introductory press conference is expected to take place at 4 PM ET today.