Under former head coach Brian Gregory Dayton is in the midst of one of, if not the most successful four-year runs in program history. The Flyers have won at least 22 games each season, won an NCAA Tournament game and were NIT champions in 2010. The future - at least the immediate future - looks somewhat murky however.

Gregory is gone, having departed Dayton for a higher profile job at Georgia Tech. The arrival of Archie Miller from Arizona brings with it optimism as the former Wildcats assistant is a good, young coach, but his work is cut out for him. The Flyers have to deal with the departure of a productive senior class, but perhaps more importantly fill the void left by the transfers of other key contributors - moves that are impossible to ever prepare for in advance.

So what's left? Enough talent to continue a run of 20-win seasons? Enough firepower to remain competitive in the always stingy Atlantic-10? Follow along after the jump to find out.

The last time the Flyers lost an accomplished head coach in Oliver Purnell, they landed another one in Brian Gregory. While the program took a couple of seasons to rebuild, it didn't take long for Dayton to reach and surpass it's success of the early 2000's. Is Archie Miller the next in line? Given the losses the program has suffered (which we'll get to in a moment), it would be unfair to expect Dayton to maintain its current four-year pace, but in two or three seasons, fans will be expecting the program to return to or surpass that mark.

The losses are heavy for the Flyers this time around, with six players in total not returning to the program in 2012. Leading scorer and rebounder Chris Wright is gone after a strong four-year career, though some may feel he underachieved somewhat during his senior season. Logan Nourse, Peter Zestermann and Devin Searcy are all lost to graduation as well, but none of these losses carry the same kind of sting as Juwan Staten. As a freshman, the promising young point guard started in 34 games, averaged over 8 points and 5 assists, had the second highest usage rate on the team and was a member of the Atlantic-10 All-Rookie Team. His future certainly seems bright and his sudden departure unquestionably hurts the status of the team's backcourt. Brandon Spearman also announced he was transferring out of the program as well. 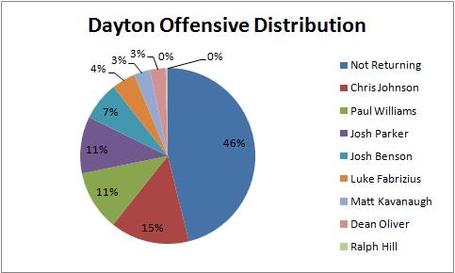 As we can see, nearly half of Dayton's offense as far as usage rate is gone. Returning senior Chris Johnson is the top offensive weapon back after finishing second on the team in scoring and third in usage rate.

The Flyers attack last season was a modest one, ranking 10th in the Atlantic-10 in overall scoring efficiency, struggling to score from mid-range and around the rim, but proving one of the more dangerous perimeter teams in the conference. Not surprisingly the offensive approach begins with spot-up possessions, a play-type that Dayton ranked in the top one-fourth nationally in scoring efficiency at just a hair under one point per possession. Johnson and Paul Williams were the top options here, but let's start with the 6-foot-6 forward first.

Johnson was the team's most efficient scorer last season and it wasn't even close. With the overwhelming majority of his shots coming as jumpers, he finished in the top 10% nationally in scoring efficiency, due in large part to his propensity for pulling up from the perimeter (he took over 200 three-pointers last season). His quick release, knack for rotating to open spots on the floor and the fact that he's left-handed makes him a touch guard when he can free himself beyond the arc. He also does a nice job of rotating behind plays in transition, where he actually ranks even higher in scoring efficiency relative to the rest of the nation, given how often the ball was kicked out to him last season. The biggest knock against Johnson at this point in his development is the drastic drop off in production he sees when forced to put the ball on the floor. As a catch and shoot player, he produces greater than 1.1 points per possession - a very good mark - but this plummets to .53 points per possession on jumpers taken off the dribble. Given that Dayton has lost several players who attack well off the dribble, allowing Johnson to spot-up for kickouts, he will likely be forced to create for himself more often this season and will need to improve in this area.

Williams was the team's best perimeter shooter last season at nearly 42% from beyond the arc, though on significantly fewer attempts than Johnson. He is among the most efficient jumper shooters in the country, ranking in the 95th percentile overall, and while he too is at his best operating as a catch and shoot player, he doesn't give away too much when shooting on the move. With that said, like Johnson, he struggles somewhat to create scoring opportunities for himself. The Flyers have countered this problem somewhat by running a set in the past to get both of these players the ball coming off of screens or hand-offs, giving them a little more space to operate. Let's look at one example involving Williams. 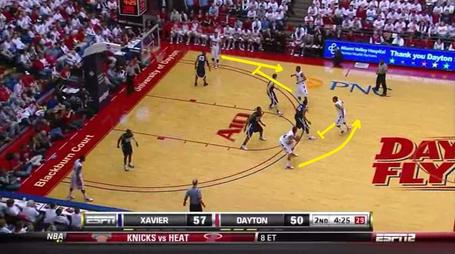 This set - taken from a meeting with Xavier - involves quite a bit of action away from the ball to set up the scoring opportunity. The ball begins on the left wing with a screen coming from the top of the key to release the ball handler driving towards the far side. As this is happening, a pin down screen is set for Williams who is lingering in the right corner, releasing him towards the top. 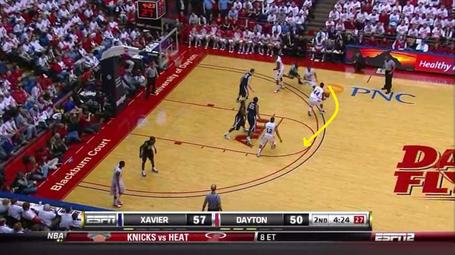 Williams rotates towards the ball handler near the top of the key, taking the hand off as his man trails behind. This is important because Williams grabs the basketball already with a full head of steam built up as he turns the corner. 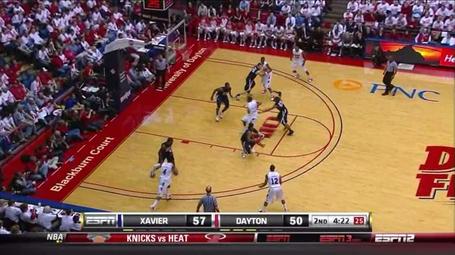 Williams gets into the lane and executes a runner over a closing defender. Again, with he and Johnson likely needing to shoulder a greater piece of the offense and their struggles to create scoring chances for themselves, this type of set could be more prevalent in 2012.

Josh Parker - a returning redshirt senior - will be the other backcourt player returning who saw a significant number of touches last season. The diminutive guard was the team's top distributor after Staten, seeing the bulk of his possessions out of pick-and-roll sets. He's an efficient spot-up player (though with a limited sample size), but overall protecting the basketball has been an issue for him. While these issues were most prominent in transition and isolation scenarios, overall the had a turnover rate of greater than 15% last season. As a player who will be charged with running the offense at points next season, he will need to make strides here.

Southern Illinois transfer Kevin Dillard will be available after sitting out this season and presents a world of intrigue as far as what will happen once inserted into the offense. The 6-foot guard is a dangerous perimeter shooter and is almost as good acting as an offensive facilitator with the basketball. He was Mr. Basketball for the state of Illinois in 2008 and was named the Missouri Valley Conference Freshman of the Year during his first season with the Salukis. Assuming he makes a smooth transition - likely given his year of sitting with the program - he could be the creator this offense needs to continue allowing their returning perimeter shooters to spot-up.

Forwards Josh Benson and Luke Fabrizius are the top returners in the frontcourt, providing a unique inside-outside combination, albeit an inconsistent one. The 6-foot-9 Benson operates primarily in the immediate area around the rim, with over two-thirds of his total possessions coming in the post, cutting to the basket or crashing the offensive glass. Overall he's a pretty efficient scorer, showing soft hands when operating in screen-and-roll sets, he just hasn't been a focal point of the offense in the past. The same can be said for Fabrizius who operates as an effective catch and shoot player and can certainly knock down shots at a respectable rate from the outside. Again, not a primary scoring option by any means, but he serves as a solid role player.

Joining the frontcourt will be Archie Miller's first recruit since joining the program, French power forward Alex Gavrilovic. The 6-foot-9, 230-pounder originally committed to Providence before landing with the Flyers. The last year has seen him compete with the French U-20 national team and train at the famed IMG Academy in Florida. Georgetown transfer Vee Sanford is a nice addition for the team as well, but will have to sit out this season due to NCAA regulations - he will have two years of eligibility remaining.

Defensively, Dayton is stronger overall than they are at scoring the basketball. The Flyers had the 5th best defensive efficiency in the Atlantic-10 last season, limit second chance scoring opportunities and defend the perimeter well. Not surprisingly, their biggest area of concern in the past has been defending low post scorers, where they allow opposing bigs to shoot 45% and score .93 points per possession - a mark that puts them in the bottom one-third nationally. Dayton has also experienced foul trouble, ranking dead last in the conference in free throws allowed-to-field goals allowed. The good news, the Flyers should remain a stout defensive team next season as well. From a points per possession allowed metric, Chris Johnson, Paul Williams, Josh Parker and Luke Fabrizius all faired quite well.

Ultimately, the Flyers look like they're in a position to take somewhat of a step back in 2012. The losses are simply too heavy offensively, the recruiting class doesn't have massive impact written on it at this point and there are too many questions this point about players with previously limited usage stepping up to a higher degree of production. Dayton isn't likely to slip to the bottom reaches of the A-10, but they won't be competing for a spot in the upper tier of the standings either.