It's been a series of small steps and little victories for UMass and head coach Derek Kellogg since he took over the program in 2008. That first season saw the Minutemen claim wins over three NCAA Tournament teams, a mark the equaled the following year as well on their way to their first Atlantic-10 Tournament home game since 2003. Most recently, UMass finished with a .500 record overall and an 8th place standing in the conference. The biggest victory of all for Kellogg though surely came in early March when, despite there being talk of his firing after three unspectacular seasons, athletic director John McCutcheon said Kellogg would be back for a fourth year.

The heat doesn't figure to back off in 2012 with the pressure turned up for a winning season at UMass and the Minutemen - already a struggling offensive team to begin with - playing without their top scoring threat from a season ago. Is a .500 mark or better in the Atlantic-10 in the cards this season for Kellogg and Co.? Find out after the jump.

This is likely a two-parter. We already mentioned the pressure to put together a winning record for Kellogg in his fourth season with the program - this will be omnipresent throughout the year. The key to accomplishing that though will be finding a scoring punch to replace the departed Anthony Gurley, the only member of the team to average double figures in scoring last year and easily the most efficient option on the team. The All-Conference selection had 14 20-point games last season, while the next five leading scorers on the roster combined for just two.

In addition to Gurley moving on after five years with the program, Hashim Bailey and Gary Correia have also used up their eligibility with UMass. Neither is a major loss, both seeing limited playing time, though Bailey was a big body to clog the middle when on the floor. The dismissal of freshman guard Daryl Traynham however was unexpected, and hurts to a degree after the Maryland native showed a propensity for facilitating the offense in limited minutes during the ten games in which he appeared. 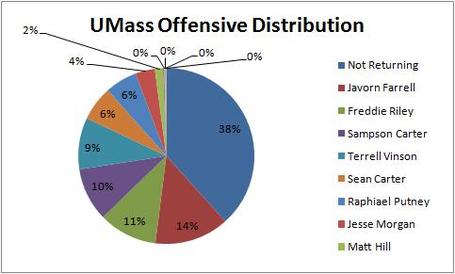 The first thing to consider when analyzing UMass this season is that the Minutemen actually return most of their important pieces to their offense. Anthony Gurley accounted for more than one-fourth of the team's possessions and ranked in the top 30 nationally in usage rate, but according to Synergy Sports Technology the next four more heavily utilized players are all back. The problem for the Minutemen however is efficiency, they don't return much to speak of. The team was at or near the bottom of the A-10 last season in scoring efficiency, two-point and three-point shooting percentage, effective field goal percentage, free throw shooting and turnover rate. They also rank in the bottom one-third nationally in scoring efficiency in both transition and the half court setting, only really excelling at finding points by crashing the offensive glass.

Javorn Farrell is the team's top returning scorer but was woefully inefficient last season, shooting less than 37% from the field. Turnovers were an issue for him last season (over 18% turnover rate) and he struggles quite a bit when it comes to his jumper - looking much more comfortable when opting to attack off the dribble. While the results are mixed here a well, isolation plays were unquestionably where he had the most success last season. At 6-foot-5 he is going to present some degree of trouble for smaller opposing guards and while he lacks an elite first step, Farrell does show some developing craftiness with his handles when he gets into the lane. His biggest issue in this regard right now is his occasional tendency to look down when on the move, making it difficult to adjust for help defenders rotating over to the ball. Given the success that he has shown getting into the paint, working on keeping his head on a swivel would make him invaluable as a distributor and significantly increase the 2.3 assists he dealt out last season. It's a telling statistic that when isolating with the basketball he only passed off 14% of the time. Improving as a catch and shoot player would go a long way to opening up his dribble drive game as well, forcing defenders to play him a bit tighter on the perimeter. Of all the jumpers that Farrell took last season, only 4% of them were of the catch and shoot variety.

Guard Freddie Riley has shown flashes - none more so than the 28 points he hung on Rider to open the season - particularly in transition where he shows a knack for finding open spots on the perimeter. Overall he isn't an outstanding three-point shooter, but when running the break last season he produced an adjusted field goal percentage of 66%, ranking in the top 15% nationally in scoring efficiency in transition. He doesn't need to be a lights out performer every night, but having a player with a propensity from burning defenses from the outside in this manner opens up driving lanes for other players. His game is most assuredly built around his jumper though, and while he primarily operates as a catch and shoot player, Riley has shown some nice ability when he opts to put the ball on the floor. His decision making isn't always the best, sometimes dribbling himself into traps or tough angle shots, but his shooting motion off the dribble is smooth and his release is quick.

The wildcard in the backcourt should be Hofstra transfer Chaz Williams who will be eligible to play this season following sitting out all of 2010-11. A diminutive floor general, Williams has very strong handles, a knack for setting up others and was a member of the CAA All-Freshman Team during his season with the Pride. If he continues to build on a strong rookie season, he could be the playmaker the Minutemen will need this year.

Believe it or not, Sampson Carter is the most efficient player returning for UMass in 2012, at least among the players who saw the most minutes last season. The 6-foot-8 forward presents a lot of intrigue given his versatility and growing comfort operating on the perimeter. His game is still quite raw at this point, there's no question. His jumper is a work in progress, his decision making needs to improve, but he can be a real mismatch for opposing defenses, particularly on the rare occasion when he isolates with the basketball, which isn't too often. Depending on what personnel the defense has covering Sampson though, the Minutemen will run a set to get him a 1-on-1 look. Let's check out an example. 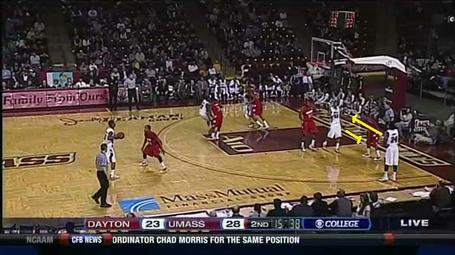 In this set the ball is at the top of the key with Carter on the right block. He flashes along the baseline and sets a screen for a teammate to rotate underneath to the other side of the floor. In this example, UMass utilizes the principle of screening for the screener which typically results in a fairly open look. 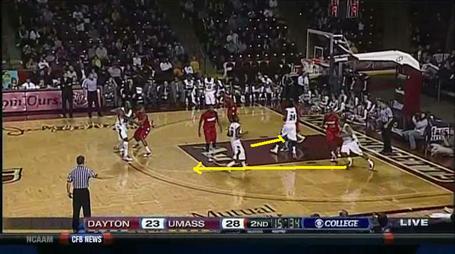 Once Carter sets his screen another teammate rotates down to the block and sets a pin down screen on his man, releasing Carter to flash to the high post. 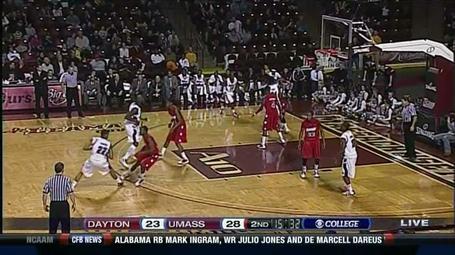 The ball is delivered and Carter can attack off the dribble with his man somewhat out of position, closing in as Carter prepares to make his first move towards the hoop. Again, the forward is nowhere near being a polished offensive weapon yet, still at his best in broken situations or transition where he can rely on his athleticism more than his skill. He has taken steps forwards in improving his face-up game and could prove a consistent third scoring option if this part of his game continues to improve.

Returning junior Terrell Vinson is of course another versatile member of the UMass frontline still developing, but showing more and more flashes of potential as he does. The 6-foot-7 forward can play multiple positions, handle the basketball and has the ability to shoot out to the perimeter - these traits just haven't consistently manifested themselves in the form of solid production. Vinson has struggled with turnovers and his shooting marks have been far from perfect, but there's always a sense that he's close - there's a reason he started the first 59 games of his career. Like Carter though, he remains at his best in scenarios where there is less structure. Vinson ranked in the top 25% nationally in scoring efficiency in shots resulting from both offensive rebounds and transition play-types, while ranking below average in all other sets.

From there, things become a little more uncertain. Raphiael Putney and Sean Carter - a pair of long 6-foot-9 athletic forwards - are the only other returning players who saw more than a fraction of the teams possessions last season. Putney in particular as a returning redshirt sophomore presents intrigue with his ability to finish around the rim and his overall physical package, while Carter, entering his final season has many of the same favorable attributes. Neither is likely to be asked to carry a significant load of the offense this season, but both have the potential to be very valuable contributors just from the standpoint of finishing dump offs inside and hitting the offensive glass.

Incoming freshman Jordan Laguerre has the potential, and likely will have to, contribute from day one. The No. 57 overall shooting guard in his class, the 6-foot-2 New Hampshire native is an explosive athlete who can create his own shot and finish in traffic at the rim. Like so many young scoring guards, the biggest area for improvement right now is his decision making and the need to get his teammates involved with the basketball as well. He is a great fit for Kellogg's offensive system though and should work out well at UMass.

Defense was, and will continue to be, the calling card of this team. According to Ken Pomeroy, the Minutemen were among the conference leaders in two-point and three-point field goal percentage allowed and had the lowest effective field goal percentage against. The inability of the defense to force turnovers however was an issue as UMass ranked dead last in this regard. Overall, this is a good defensive unit though. They defend the rim well, contest shooters consistently, have an excellent transition defense and return some of their better defenders including Sampson Carter who from a points per possession allowed metric ranked among the best stoppers in the country last year.

There will certainly be a lot of questions surround the Minuemen when the season begins - not the least of which is where are the points going to come from. The offense no longer has the benefit of knowing that Anthony Gurley will go out and get 20 each night while everyone else chips in what they can. This isn't to say UMass needs an elite scorer on the floor, but other individuals are going to need to raise their ability to put the ball in the basket. There is the potential for this team to make another run at a near .500 record in the conference, but they could just as easily slide back into the bottom third of the Atlantic-10.