A year from now Maine fans may look back on 2011 as the the hardship that polarized their team and made achieving postseason success possible. Until that hope becomes a reality however, last season will stand as a monument to failed expectations, a nearly inconceivable collapse that crushed Black Bear Nation.

On the morning of February 1st the Bears were proud owners of a 14-7 record, with an 8-1 standing in the America East. Their blossoming resume featured wins over Penn State and UMass, they had waltzed into Roy L Patrick Gymnasium and defeated Vermont by 14, the sky was the limit. But it was short lived bliss. The next month produced just one win and the season ended with yet another opening round loss in the conference tournament.

Frustration is omnipresent around the program, with most of it aimed at head coach Ted Woodward who will be entering his eighth season at Maine where he has produced a record of 88-119. The temperature will be turned up on the coach's chair this season and Woodward will be tasked with leading a team that is losing more production than he is returning. It's a bleak situation to be sure, but maybe, just maybe, there are the pieces necessary to create a product capable of winning a tournament game.

It has to be the Woodward Watch, doesn't it? He's seemingly been on the hot seat for the last three years and even now that he is producing a winning record - something that escaped him his first four seasons with the program - he is still coming under scrutiny. This isn't to say this heat isn't deserved, Maine's collapse last season was one of the most dramatic in the country and Murphy Burnatowski announcing his departure from the team only added fuel to the fire. If there's any doubt that Woodward will need to produce a winner this season, consider that the words hot, heat and fire have all been used in the preceding paragraph.

The Black Bears graduate four players plus the departure of Burnatowski, resulting in a massive loss of production at both ends of the floor. The biggest loss of course is that of senior forward Troy Barnies who earned first team All-Conference honors after leading Maine in scoring and proving to be the team's best defender as well. Terrence Mitchell was the second most efficient scoring option and the top perimeter threat on the roster, connecting on 39% of his three-point attempts (though Gerald McLemore wasn't far behind and on more attempts as well). Malachi Peay and Sean McNally move on as well next year, the latter finishing second on the team in rebounding last season. 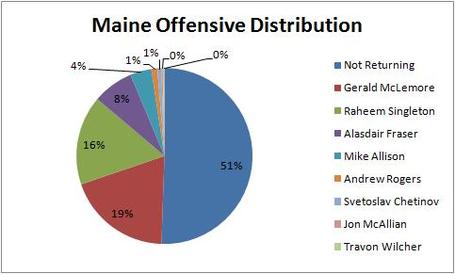 It's one thing to talk about a huge loss of production from one season to the next, but the visual representation of this is always more dramatic. The Black Bears are the first team we've looked at in the conference that will be faced with the reality of having to replace an enormous amount possessions on offense. Luckily for Maine, McLemore and Raheem Singleton were second and third respectively on the team in terms of usage rate, with McLemore receiving nearly the same number of possessions as Barnies. The offense will start with these two and other pieces will be added and built up as the season progresses - hopefully with new faces stepping to the forefront quickly.

For all of the struggles Maine endured in the second half of the season, they were a very strong offensive team, finishing with the best efficiency in the conference and ranking in the 86th percentile nationally. McLemore was the team's most efficient scoring option last season and is primed for a big senior year after averaging nearly 14 points per game a year ago. The 6-foot-3 guard builds his game off of his jumper which accounted for 84% of his total shot attempts last season. Not surprisingly the Black Bears utilized him quite frequently by running him off of screens and looking for him with skip passes over the top in spot-up situations. What will be interesting to see however is if McLemore is isolated with the basketball more frequently next season given the tremendous success he had in this play-type last season - granted in a somewhat limited sample set. In all, isos accounted for just 9% of the guards total possessions, but his combination of quickness and craftiness resulted in a remarkable 1.21 points per possession on 47% shooting, placing him among the most efficient scorers in the country out of this set.

Maine will often run a 1-4 high set on offense which features quite a bit of off the ball movement designed to get McLemore the basketball in a position he can look to get off a quick shot or attack off the dribble. 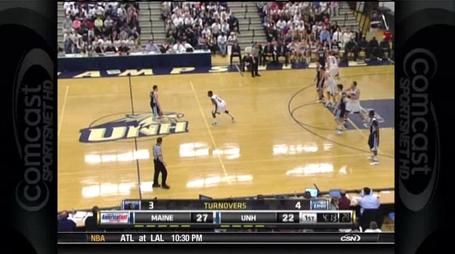 The play begins with the ball up top and the four remaining players lined up across the foul line extended. McLemore is on the far side of the court - this is where the action begins. 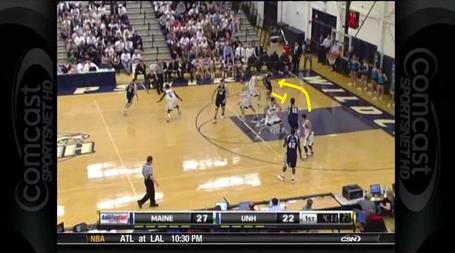 As the ball is dribbled to the left side McLemore rolls to the left block and sets a screen for his teammate cutting along the baseline from the right elbow. At the same time, the post man at the left elbow swings around and squares to the basket. 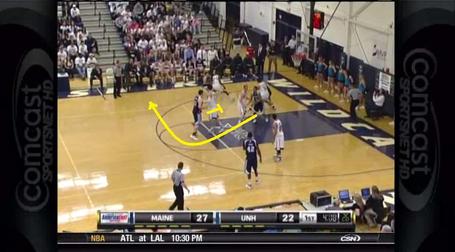 This is where the next part of the set takes place. After McLemore sets his screen he cuts off a screen being set for him at the foul line, rotating to the left wing after the ball has been dribbled into the corner. 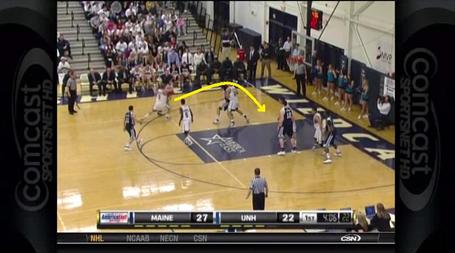 As he clears the screen, the ball is delivered to McLemore who then has the option to catch and shoot or dribble drive depending on what the defense gives him. In this particular instance he has a step on his defender and capitalizes by getting into the lane and finishing at the rim - something he did with great success last season.

The man who will be charged with delivering the basketball most often will be returning senior Raheem Singleton. Outside of McLemore, the Boston native is the only remaining member of the roster who was responsible for at least 10% of the team's possessions last season and while he proved only an average scorer, he ability to facilitate the offense is quite clear. Maine used him most frequently in pick and roll sets (38% of his touches) where he proved a strong passer, rarely turning the ball over and producing a 50% shooting percentage on his kick outs. He was equally as good creating scoring opportunities out of isolation sets which will be paramount to the team's offensive production next season given the relative lack of scoring punch coming back.

Alasdair Fraser and Mike Allison both scored with above average efficiency last season, but did so with very limited usage rates. Fraser is a load inside physically and was excellent scoring in the post when he got the touches - expect that to continue next season. Chances are his efficiency marks will regress somewhat as a result of a larger sample size and additional attention from opposing defenses, but the forward has shown enough flashes to indicate he can be a consistent third scoring option.

It is entirely possible one of the primary scorers on this team next season could be a newcomer. Incoming freshman Xavier Pollard is the top member of Maine's latest recruiting class and already has a strong nose for the basket. A 6-foot-3 guard, he'll play off the ball where he can utilize his quickness and aggressive nature, he just needs to be reigned in somewhat by the coaching staff.

Defensively there will be some question marks for the Black Bears in 2012. They ranked in the bottom half of the America East in almost every significant defensive metric, save for opponent offensive rebound rate. Maine did excel at defending the mid-range spot on the court better than most, but lose their top defender with Barnies graduating. In fact, based on the points per possession metric, the team's top returning defender is Mike Allison who achieved that standing more as a result of a low number of plays defended as opposed to lock down defense.

Ultimately, Maine is a tough team to decipher. The Black Bears are a strong team at the top, but the supporting cast is a quagmire of uncertainty, as is the situation surrounding the stability of the coaching staff. There is enough talent here for another top three finish in the conference as well as enough to win a postseason game - but that has been the case in the past, only for the season to end in disappointment.