Year one of the John Gallagher coaching regime certainly bred a degree of optimism for Hartford fans as the team's 11 wins were the most since a school-record 18 during the 2007-08 season. The Hawks finished just a game below .500 in the America East and recorded wins over Maine and Boston during the regular season, then upset the Black Bears in the opening round of the conference tournament. Yes, 2011 was a good year for Hartford. The future could be anyone's guess.

Gallagher will enter his second season coaching the program with just six returning players on the roster, including senior Andres Torres who missed all of last year with an injury. This unquestionably will be a young team as the Hawks have already received commitments from five players and have two more scholarships to hand out for the class of 2011. At this early juncture it seems appropriate to label 2012 as a rebuilding year, which is a four-letter word for fans, but given the youth and inexperience that will be omnipresent this season, how can it be anything else?

It has to be how quickly the freshman class can adjust and contribute once the season starts. Once all of the scholarships have been handed out the Hawks will feature more rookies than anything else, though this group of newcomers looks to be very solid by America East standards. Three of the five commits are ranked in the top 150 at their position nationally according to ESPN, including power forward Nate Sikma, son of former NBA big man Jack Sikma. We'll delve further into the recruiting class in a little bit.

Not everything, but it's pretty darn close. Hartford loses four of its top five scorers, its top four rebounders and four of their top five players in terms of usage rate. Guard Joe Zeglinski was the team's top scorer at 14.2 points per game, but was about as inconsistent as it gets, turning in just as many 20-point efforts (8) as he had games in which he failed to score more than seven points. Morgan Sabia, Milton Burton, Anthony Minor and Kevin Estes are all gone due to graduation as well, while Ross Erickson, Joe Nardi and Mustafaa Jones are all transferring. It's as close to a mass exodus as you can get. 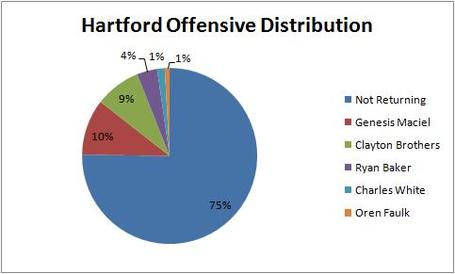 If the above chart isn't enough to make Hartford fans cringe, not much will. Big man Genesis Maciel and junior guard Clayton Brothers are the only returning players who saw a marginal usage rate last season. Andres Torres who was a strong contributor as a junior was not included in the graph after missing last season.

Overall, Hartford left a lot to be desired at the offensive end of the floor. The Hawks were among the least efficient offenses in the country (8th in the conference), didn't shoot well from the perimeter and were dead last in the America East in offensive rebound rate, ratio of free throw attempts to field goal attempts and free throw percentage. This sub par execution extends to the majority of the individual play-types as well. In fact the only sets where they ranked in the top 50% nationally in terms of scoring efficiency were shot attempts generates from running shooters off of screens and hand offs. One statistical anomaly from the 2011 season that was readily noticeable was the manner of success Hartford had operating in the mid-range area of the court. Despite ranking in the bottom one-third in scoring efficiency on three-point attempts and jumpers from within 17 feet, the Hawks rated as one of the best mid-range shooting teams in the nation, hitting nearly 43% of their tries from this area.

Maciel is the top returning offensive threat for Hartford, scoring better than .84 points per possession on with an adjusted field goal percentage of 47.5%.  His 6-foot-9, 250-pound frame ensures that he will be one of, if not, the largest player on the court each night out in conference play, yet the largest percentage of his shots came in spot-up situations. Generally at this level of competition it would seem a crime to waste a body with that kind of size floating around the perimeter so frequently, but a 37% shooting mark from beyond the arc and better than 1.15 points per possession on jumpers (90th percentile nationally) is more than enough evidence to support Maciel stepping outside the lane - if he can keep his efficiency up with a higher usage rate. The remaining bulk of his touches come in post-up and pick and roll scenarios where he acts as the screener. As an interior scorer he can be hit or miss, struggling at times with footwork and turning the ball over at a fairly high rate. As a screen and roll man, not surprisingly, Maciel almost exclusively goes to the pick and pop given his shooting stroke as we'll see. 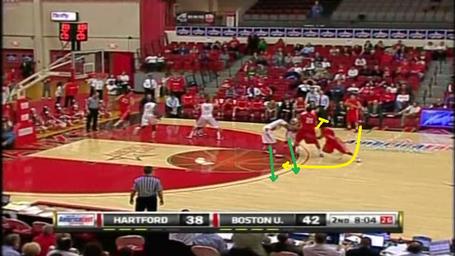 There's nothing special of flashy here, just Hartford taking advantage of an over aggressive defense and Maciel proving the beneficiary. He sets a high screen just to the right of the top of the key and the ball handler dribbles off the right shoulder. As he does, both the original defender and Maciel's man collapse on the ball in a hard double. 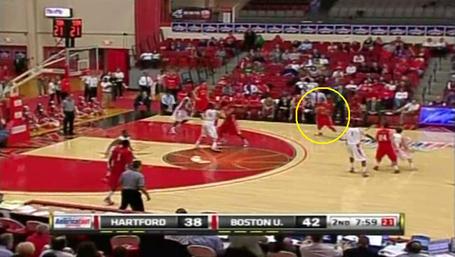 The ball is delivered resulting in a wide open look for Maciel from the outside. Again, a simple play but with fantastic results as the big man had an adjusted field goal percentage of better than 56 out of these sets last season.

From there, it's more questions than answers on offense. Torres hasn't played in a year and wasn't a major offensive weapon as a junior, though he has the ability to do some damage from the perimeter. The trio of Brothers, White and Faulk not only weren't major usage players last year, but all three were in the bottom 10% nationally in offensive efficiency. This is where the freshman fill in the blanks - hopefully.

Austin, Texas native Yolonzo Moore is the consummate point guard who isn't going to blow anyone away with flash at this point, but simply gets the job done. Shooting guards Wes Cole and Dustin Clarke should provide some scoring punch fairly early in their careers. Cole is undersized for the position but has the kind of range that will spread the floor as he continues to develop. Clarke, at 6-foot-3 with a high degree of athleticism, may present the most upside with his ability to score in traffic. His true potential may not be realized next season, but there's the potential for an immediate impact. Nate Sikma is an undersized power forward but was a prolific shooter at the high school level. He could be a nice spot scorer off the bench next season for this team. Corbin Wroe, a shooting guard from Australia rounds out the current recruiting class.

Defense was something of a mixed bag for the Hawks last year. Hartford was in the middle of the pack in regards to defensive efficiency and forced more turnovers than any other America East team, but were near the bottom in opponent two-point and three-point field goal percentage. Luckily, they do return some semblance of a quality defense next season. For all of the struggles that Clayton Brothers has at the other end of the floor, he was a a very good defender, limiting opponents to just 30% shooting, while defending the third most shot attempts of anyone on the roster. Maciel only defended about 5% of opposing plays last season, but in that limited sample size was tremendous, limiting opposing players to just 25% shooting which ranked in the 94th percentile in the country.

Next season will likely do down as a less than stellar one for Hartford, there's simply too much youth and too much lost from a year ago. With that said, don't be surprised if the Hawks play some of their best basketball at the close of the season as that freshman class starts to adjust and gel in with the rest of the roster.