For a program that has produces such players as Tom Gola, Lionel Simmons, Rasual Butler and even Gary Neal, La Salle hasn't been in the business of producing quality teams as of late. The Explorers have just two winning seasons since 1992 and current head coach John Giannini has the second lowest winning percentage of any coach in team history. Still, given the school's rich history of basketball tradition, it's hard to completely rule out success being resurrected at Tom Gola Arena - it just might not be in 2012.

Unquestionably it has to be how soon and to what degree will new faces be making an impact for the Explorers this season. Winthrop transfer Taylor Dunn will join the backcourt after sitting out last season due to NCAA transfer rules. He played just four games as a freshman, but has a solid prep career and is a noted shooter. The real intrigue comes from the recruiting class however, particularly power forward Jerrell Wright out of Philadelphia. We'll get to these players more later on.

The losses are heavy - there's no question. Blossoming star Aaric Murray transfered to West Virginia, Jerrell Williams, Ruben Guillandeaux, Steve Weingarten and Greg Danish and have all graduated. This equates to La Salle losing it's top three scorers, top two rebounders and top three most heavily utilized players. The Murray loss hurts the most though simply because of the upside he presents and the kind of blow it is to the mentality of the program when such a promising young player opts to move to greener pastures. 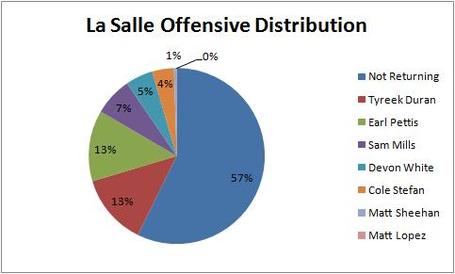 Regardless of what kind of personnel a team is bringing back, replacing the kind of production the Explorers have lost is a significant challenge. This also makes it difficult to fully predict how this team is going to operate offensively, which in many ways is appropriate given the relative unpredictability of this unit last year. In 2011, La Salle ranked 6th in the Atlantic-10 in offensive efficiency, 12th in two-point field goal percentage, first in offensive rebound rate and second in free throw shooting. They were an efficient team operating in the post, but below average finishing around the rim in all other scenarios. Overall, it was a tough group to get a grasp on at times.

As far as usage rate, Tyreek Duren is the gold standard for whatt La Salle will trot out onto the court this year and he could be the season's x-factor. The diminutive point guard landed on the A-10 All-Rookie Team last year after averaging just under 10 points and more than four assist per game, while recording the most steals in a season by a freshman in program history. With that said, turnover problems plagued the youngster in his first season, with nearly 23% of total possessions last season resulting in giving the basketball away. This issue was most pronounced in transition and pick-and-roll sets, which just so happened to be the two play types that he was the least efficient. Overall, Duren isn't a strong shooter, connecting on just 28% of his jumper attempts, mainly as a result of his mechanics. While the returning sophomore has a quick release, his shot has somewhat of a hitch to it and his shooting elbow tends to flare out on occasion, resulting in an inconsistent stroke. He is certainly much stronger when opting to attack the basket, ranking in the top 25% nationally in scoring efficiency out of isolation sets and even higher when driving to the rim out of spot-up touches.

The other top returning offensive option for La Salle as far as usage rate is Rutgers transfer Earl Pettis who will be in his second year of playing with the program. The 6-foot-5 guard has an above average jumper, proving capable of hurting teams both as a catch and shoot option and off the dribble, though because of his somewhat long and slow release he needs space to get his shot off. He hits the offensive glass well for a perimeter player, but perhaps his most beneficial trait is the manner in which he operates in the pick-and-roll as both a scorer and distributor. Let's take a look at an example of a set the Explorers will run with Pettis in this play type. 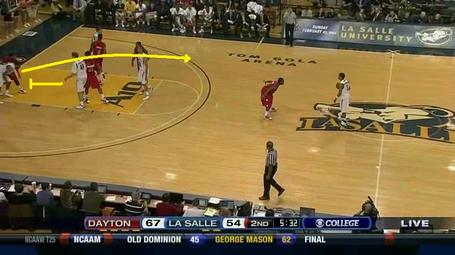 The play begins with Pettis down on the block and a teammate setting a pin down screen to free him up to flash towards the ball on the right wing. 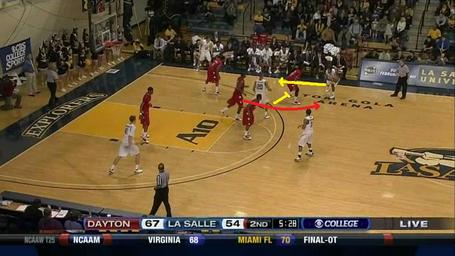 Once on the wing the ball is delivered and La Salle looks to run him off a pick-and-roll set with the screen coming from the left side - this is where Pettis shows his smarts. As the screen comes, the help defender hedges out aggressively, anticipating the dribble drive to the left. Pettis, recognizing this, cuts away from the screen and attacks off the right hand. 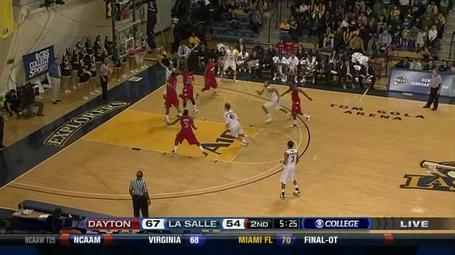 He catches the defense off guard and gets to the rim for the finish. Pettis typically looks for his shot a little more consistently out of these sets, averaging .85 points per possession which ranks in the top 30% nationally. However, when he opts to distribute to teammates, he's even more potent, ranking in the top one-fifth in the country in terms of points produced from scenarios when he drives and kicks. While there's no question Pettis is going to look for his shot more often than not, having a two-guard with this ability to facilitate offensively is a nice plus.

From there, things become somewhat more hazy. Sam Mills and Devon White are the only other returning players who saw significant roles in the offense last season and neither was a top option. Mills is an excellent shooter, topping 40% from beyond the arc and ranking in the 90th percentile nationally as a jump shooter. The rest of his game has some holes as Mills struggles with turnovers and hasn't done a very good job of running the pick-and-roll to this point. White, a 6-foot-8 forward, has shown to be pretty productive in limited playing time, averaging better than three rebounds and one block in just 12 minutes last season. His game is built primarily from operating around the rim, but continuing to be a presence defensively as his playing time increases will make him an impact player for the Explorers.

This is where the new additions will come in for La Salle. We already touched on Taylor Dunn from Winthrop and the shooting prowess he brings to the floor, but power forward Jerrell Wright is the player to watch. The 6-foot-7 Philadelphia product is a top 100 player at his position, showing well above average athleticism and explosiveness around the rim. He hits the glass hard shows good hands in the lane, but is still a raw player with a lot of upside. Long term, Wright has the potential to be a very good player at La Salle, an all-conference caliber player. Another frontcourt presence with upside joining the program this fall is center Steve Zack, another top 100 positional player. The 6-foot-10 big man moves well for his position, is very long and is a defensive presence already at this point, though his offense has some room to grow.

Defensively La Salle was a mixed bag in 2011, ranking in the bottom half of the conference in overall efficiency and just about every major statistical category, but they did maintain a high rate of forcing turnovers. The Explorers do a good job of contesting perimeter shooters, holding opposing teams to just .95 points per possession on all jumper attempts, but the closer you move to the rim, the more La Salle struggles. The problem facing them in 2012 however is trying to replace the kind of production that players like Williams and Murray contributed. From a points per possession allowed metric, Pettis and White are the top returners, with White ranking in the top one-third nationally in this regard. Incoming freshmen Zack and Wright will need to be stout at this end of the court from day one in order for the Explorers to avoid struggling further here.

La Salle has simply suffered too many losses this off-season to realistically expect anything beyond a .500 season and even that might not be achievable. Murray was primed for a huge season in the A-10 and his departure leaves a huge void that no single returning player on the roster can fill. With that said, the Explorers do have a promising freshman class, one that could produce winning seasons again in the not too distant future.