Two years ago Saint Louis was one of the Atlantic-10's elite after winning 23 games and going 11-6 in conference play. After stumbling through the 2010-11 season, the SLUnatics should have plenty to cheer about in 2012 as the Billikens look primed for another run at the top of the A-10 as head coach Rick Majerus enters his fifth year with the program.

A very young SLU squad gained valuable experience last year and will enter the season with easily the lowest amount of roster turnover in the A-10 and among the lowest in the country. Perhaps more important than experience though, the Billikens have balance, the kind that makes it close to impossible to key in on just one player. Will this mean the school's first NCAA Tournament berth in over a decade? It could certainly be in the cards.

Can SLU live up to the expectations? It's rare for a team to jump from a 12-19 record to talk of crashing the top of the conference, but that's the talk surrounding the program this year and having coached at the game's highest level and biggest stage, Rick Majerus is a perfect coach to lead this group. The Billikens haven't been to the NCAA Tournament since 2000, which also happens to be the last time they won a conference championship, that being when they were still competing in Conference-USA.

As we've set, not all that much is gone heading into the 2011-12 season. Sophomore guard Christian Salecich transfered out of the program to the Division II level after averaging just over two points per game in 14 minutes. Incredibly enough, that is the extent of the losses Saint Louis has to cope with next season. 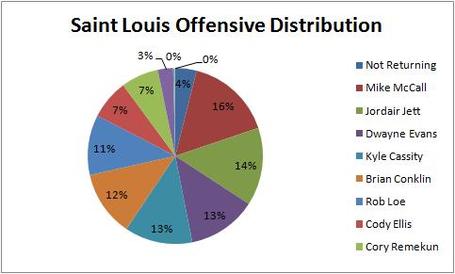 We talked about the Billikens balance, but seeing it visually like this is impressive. Six different returning players had usage rates between 11 and 16 percent last season, so really it should come as no surprise that Saint Louis was near the top of the Atlantic-10 in assist rate (percentage of made field goals assisted), with nearly 60% of their total shots coming as a result of this ball movement. As a whole though, this team struggled offensively, which undoubtedly was a byproduct of the relative youth on the roster (no seniors, nine freshmen and sophomores).

According to Ken Pomeroy, SLU was 13th in the conference in scoring efficiency, dead last in three-point shooting, and near the bottom in turnover rate (meaning they had a high rate), offensive rebound rate and in getting to the line. The one area they did manage some degree of success was connecting on shots inside the arc, ranking 4th in the A-10 in two-point field goal percentage. Given those facts, it's really not all that surprising that the Billikens were at their most effective scoring in the post and in transition. According to Synergy Sports Technology, Saint Louis actually ranked in the 94th percentile nationally in transition scoring efficiency at nearly 1.2 points per possession, this despite being one of the slowest teams in the conference. So while the Runnin' Majerus' aren't likely to become a common theme anytime soon, they are potent.

Diminutive guard Mike McCall had a solid freshman campaign (10 points, 3 assists, 37% 3-point shooting), and is the team's top returning player regarding usage rate. He primarily operates as a jump shooter where he is good, not great, but was unquestionably at his best when isolating and pushing the tempo in fast break scenarios. Now, with the caveat that these rankings are based on a limited sample size for McCall, he ranks in the top 10% nationally in scoring efficiency in both transition and isolation play types thanks to his quickness and handles. He tends to struggle just a bit with turnovers, but there's no questioning his nose for the basket and ability to get into the lane. It is this latter trait that makes him so valuable as a distributor and why the Billikens opt to use him in pick-and-roll sets so frequently (25% of his total possessions). Let's look at a quick example of a set that Saint Louis runs that shows the underclassman's decision making ability. 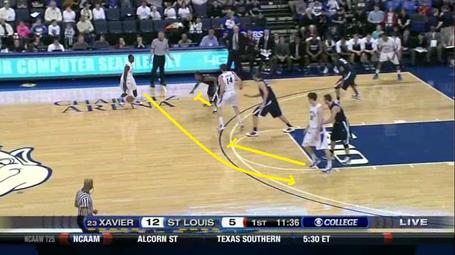 This set is the double high pick-and-roll look that the Billikens will employ from time to time, and it works quite well with McCall running the show. The play sets up with him on the far wing and a screen being set on the ball, with a second staggered one coming near the top of they key, allowing McCall to attack towards the right. 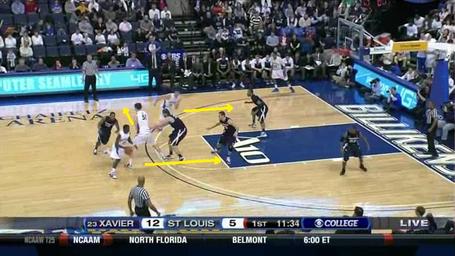 Pressure is placed on the defense at two points and forces a massive retreat towards the paint area. The combination of McCall turning the corner off the second screen and the first screener diving to the block forces the defense to collapse which sets up the next play. 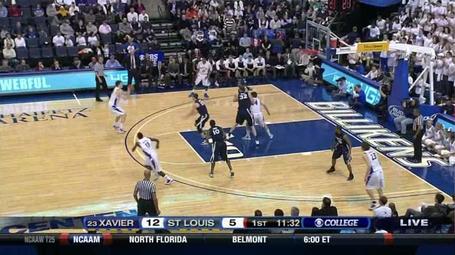 McCall wisely recognizes the open man (screener No. 2) who rotates behind the play and sets up on the perimeter for an open look. The ball is delivered and the result is a three-pointer for St. Louis. This is pretty characteristic of McCall who in his freshman season was a very efficient passer out of pick-and-roll sets, producing an adjusted field goal percentage of 62%.

Forward Brian Conklin was second on the team in scoring despite having only the 5th best usage rate on the team. The 6-foot-6 returning senior operates very well around the basket despite being undersized for a frontcourt player. The bulk of his touches come in the post where he shoots over 51% thanks to his wide base which allows him to establish position, and a solid array of fundamental moves. He does struggle against longer, more athletic bigs at times, but in general Saint Louis isn't losing a lot by giving him the ball here. This fundamentally sound approach extends to other areas as well. He shows great basketball IQ when running the floor, not necessarily always beating the defense down, but recognizing seams that he can exploit. Conklin shows soft hands when operating as a roll man, converting nearly half of his shot attempts here and is above average at finishing offensive put backs as well. He is the quintessential scrapper who can contribute points without necessarily needing the basketball in his hands.

Jordair Jett, another underclassman guard, struggled last season but shows some flashes of ability. The biggest problem for the Minnesota native was his massive turnover rate (over 22%) which was a byproduct of both bad passes and poor decision making with the basketball, often dribbling himself into corners or impossible shot angles. He had his most success in transition and moving off the ball, where he speed is able to be fully utilized. This ability is somewhat neutralized in the half court set, not necessarily because he doesn't possess a good enough first step, but rather he often seems unsure of himself. Improving his shooting mechanics would go a long way to helping him improve as well. Jett ranked in the bottom one-fourth nationally in scoring efficiency off jumpers, averaging less than .72 points per attempt due in large part to the inconsistencies in his stroke. His motion looks fairly smooth, but his release point changes regularly and he shows a tendency to fade away at times.

Forward Dwayne Evans emerged as one of the more versatile scorers on the floor last season for Saint Louis, blending an emerging inside/outside game that shows some promise. He can definitely hold his own inside, leading the team in rebounding and proving an able scorer in the post where he ranked in the top one-third nationally in scoring efficiency on the block. The bulk of his touches however come in spot-up settings where he is a modest jump shooter. His form is good, but tends to be long and slow, requiring quite a bit of space to get off. Improving the quickness of his release would increase his potency as a scoring weapon.

Guard Kyle Cassity had a solid junior season, leading the team in assists per game and proving an excellent dribble drive threat. While the bulk of his possessions resulted in jumpers - an area in which he was above average in scoring efficiency - Cassity was among the top players in the country when he opted to attack the rim off the dribble. In fact, he ranked in the top 10% in all of Division 1 in spot-up and pick-and-roll scoring efficiency in scenarios where he got into the lane. The returning senior shows an excellent feel for the game, able to slice through defenses thanks to his strong understanding of pace and changing speeds, rather than exploding with an elite first step. His presence on the floor gives the Billikens multiple options for facilitating offense off the dribble.

New Zealand big man Rob Loe is the final member of the roster who saw a significant number of touches in the Saint Louis offense last season. He struggles a great deal in the post, ranking in the 6th percentile nationally in scoring efficiency in this play type, shooting just 24% overall when operating on the block. With that said, he is excellent when cutting to the basket after setting screens, displaying soft hands and a knack for finding open lanes in the defense. Overall though, Loe is very much a face-up big man with range extending beyond the arc. He is a modest perimeter shooter, but overall hits on over 35% of his jumper attempts, ranking in the top 30% for scoring efficiency in this regard, not bad at all for a frontcourt player. Fellow forward Cody Ellis provides a complimentary inside/outside presence as well, with the 6-foot-8 forward proving efficient as a catch-and-shoot player in spot-up sets and well above average when he opts to post up as well.

The return of junior guard Kwamain Mitchell and transfer guard Jake Barnett will unquestionably bolster the backcourt as well. Mitchell was involved in some messy off the court issues and was actually off the team for a point last season, but his impact on the floor is undeniable. As a sophomore the diminutive guard was a second team All-Conference performer, leading the team in scoring at nearly 16 points per game. It will be interesting to see how a year away from the game effects his level of play, but if he continues to progress in the manner he was before his dismissal, we're talking about a first team All-Conference player. Barnett sat out last season after transferring from Toledo where he averaged over 12 points per game and proved a perimeter shooting threat, connecting over over 37% of his attempts from beyond the arc.

The lone member of the 2011 recruiting class is 7-footer John Manning, a top 50 center. The Virginia native hustles and brings energy to the floor, displaying a fundamentally strong post game and a high basketball IQ on defense. He is a below average athlete though and needs to improve his strength in order to handle the rigors of the paint in the Atlantic-10.

Defensively the Billikens were almost a mirror image of their offense, ranking near the top of the conference in overall efficiency, turnover rate forced, offensive rebound rate allowed and opponent two-point field goal percentage. They struggle to defend the post and spot-up sets, particularly perimeter looks, but above average everywhere else across the board. The good news for Saint Louis is every player returning on their roster ranks in the top half of all Division 1 players in points per possession allowed, a rare characteristic for any team.

Overall, 2012 should prove to be a good year for Saint Louis. We already know the Billikens will present a strong package defensively and if their offense takes a step forward - which it should given the natural maturing process of a young team - we're looking at a program that could certainly finish in the top three in the A-10 and land in a postseason tournament.