The six years of the Bill Herrion era have hardly featured much degree of variance. New Hampshire has won as few as nine games and as many as 14, going 3-6 in the America East in that stretch, never advancing beyond the second round. Is this the season the Wildcats make the jump and break .500 for the first time since 1995 and just the second time in the last 25 years? Barring a sudden offensive revelation, probably not.

UNH certainly brings some pieces to the table, including senior Alvin Abreu who is back after receiving a medical redshirt last season, but much as was the case last season, offensive ineptitude will be this teams undoing. The 'Cats simply struggle too much shooting the basketball to be taken seriously as an early season threat, but with a relatively experienced group returning perhaps New Hampshire catches fire in conference play when it counts the most.

The health of Abreu will be paramount to whatever degree of success New Hampshire achieves this season. With the senior guard in good health entering the 2010-11 season UNH was ranked 4th in the pre-season conference rankings - the outcome following his injury was clearly in stark contrast. The All-Conference selection will provide a solid scoring punch if he has fully recovered from the torn acl he suffered after just two games last season. This isn't to say Abreu can carry this team to a conference championship, but he can keep them from dwelling in the basement.

The graduation of Tyrone Conley and Dane Diliegro are undoubtedly the blows that hurt the most, as the Wildcats will be without their leading scorer and second leading rebounder from a season ago. Conley earned All-America East second team honors after averaging over 15 points per game and was the team's most trigger happy perimeter shooter, hoisting nearly eight three-pointers per game (but hitting just 33%). Diliegro bulled his way to more than eight points and eight rebounds per game last season to his 6-foot-9, 240-pound frame. The Massachusetts native had seven double-doubles as a senior, including a pair of 20-10 games against Brown and UMBC. Big man James Valladares is also moving on, though he wasn't a significant contributor to the offense. 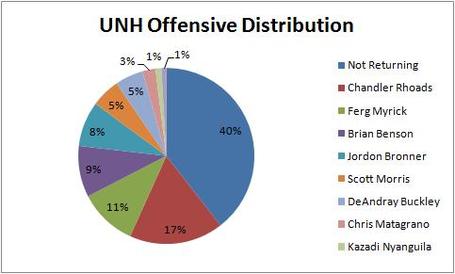 Of the players returning next season there is a good semblance of balance. Of course we have to keep in mind the pie chart will look significantly different with Abreu back in uniform, expect his usage rate to be in the vicinity of 20% which was the case during his junior season.

As we've already mentioned this is not a strong offensive team. UNH was dead last in the America East in offensive efficiency, effective field goal percentage, three-point shooting, free throw shooting and seventh in two-point field goal percentage. They shot just 28.3% on all jumper attempts last season, were well below average from every spot on the floor and ranked in the bottom half nationally in scoring efficiency for every play-type. This isn't meant to pick on the Wildcats, it's stating a truth that is readily apparent upon watching them play - they can't shoot. How else do you explain the team with the lowest turnover rate in the conference struggling so mightily?

In order to a find a returning player with an above average scoring efficiency we have to go back to the 2009-10 season when Abreu was injury free. He was at his best in spot-up situations, ranking in the top one-third nationally with an average of over .96 points per game with an adjusted field goal percentage of nearly 50. Rather than operating as a catch and shoot player though, the 6-foot-2 guard is at his best operating off the dribble, connecting on 42% of his dribble jumpers out of this play-type. He proved just as capable when taking the basketball all the way to the rim, utilizing his quickness and handles to break down defenders. Let's look at a simple but potent example of the kind of ability Abreu brings as the Wildcats best scoring option. 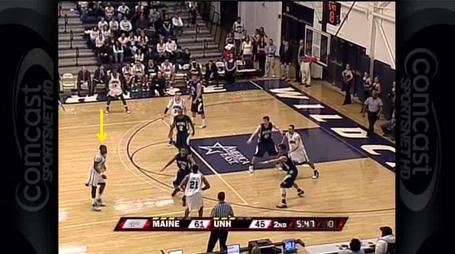 With the ball on the nearside wing, Abreu sets up just to the right of the top of the arc looking for the basketball with no one really marking him up at this point. 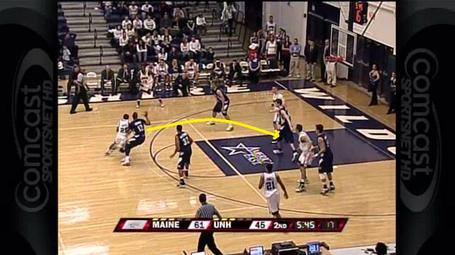 Once he catches the ball Abreu makes a sharp cut to his left, turns the inside shoulder and beats his defender off the dribble and finishes amidst a swirling defense in the lane. Again, this is hardly a complex play by any means, but will be quite prevalent in the Wildcats offense this season as their senior guard has a nice ability to score out of these kinds of basic sets.

The rest of the offense as it breaks down right now is very much a series of question makes based on underwhelming performances last season. Chandler Rhoads emerged as a promising young player, earning All-Rookie honors, but was wildly inefficient with the basketball, ranking in the bottom one-fifth nationally in scoring efficiency. For that matter, no returning player outside of Abreu ranks in the top 50% of returning players nationally in scoring efficiency - something that clearly has to change in 2012 in order for UNH to contend.

Luckily for the 'Cats, what they lack in scoring prowess, that make up for at the defensive end of the floor. New Hampshire ranked four in the conference in overall defensive efficiency, but managed to do very well in a few specific regards. They chase opposing teams off the three-point line, limiting attempts from this range, crash the boards fairly hard and believe it or not, defend mid-range shooters better than almost any team in the country (they rank in the 99th percentile here). Rhoads, Ferg Myrick, DeAndray Buckley and Scott Morris all ranked very highly in individual defensive efficiency, which bodes well for the future that UNH features such a young core of solid defenders.

Ultimately, New Hampshire is looking at a year in the bottom half of the America East. This is a young team and until proven otherwise, a group that simply isn't very good at scoring the basketball. Given a year or two for some of these younger pieces to develop however and the Wildcats could - big emphasis on that word - find themselves competing for a top four seed in the conference tournament.