Binghamton's current role in college basketball is to serve as the a sad reminder of how quickly things can turn on a program. Just two seasons ago the Bearcats were on top of the America East, winning both the regular season and tournament championships to advance to the school's first ever NCAA Tournament - pretty remarkable for a program that had just transferred to Division 1 in 2001.

Today, under the guise of second-year head coach Mark Macon, Binghamton is at the other end of the spectrum, due largely to the scandal that rocked the program in the 2009-10 season that ultimately saw six players kicked off the team. An abysmal 8-23 record in 2011 (4-12 in conference) has been the low point to date, but 2012 could easily yield an even worse record given the sheer number of losses the program suffers due to graduation.

If nothing else though, credit the Bearcat faithful for sticking with their team. Binghamton led the conference in attendance for the 8th straight season in 2011, drawing 900 more fans per game than the next closest team.

We'll try to keep this one positive, but certainly at this juncture the most interesting subplot for Binghamton has to be how Kyrie Sutton will be utilized now that he is a senior an easily the top returning offensive weapon for this team. As a junior the 6-foot-9, 240-pound behemoth saw limited touches inside, but was second on the team in rebounds despite playing just 18 minutes a game. All of those numbers should go up this year and will have to if the Bearcats have any hope of climbing out of the conference cellar. 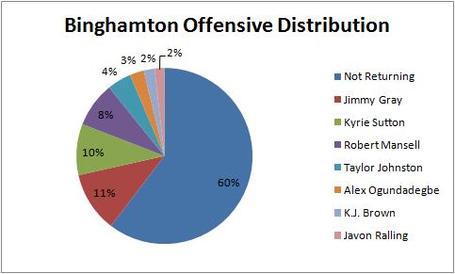 This is a team that was built around perimeter shooting a year ago, attempting more than 20 three-pointers per game and ranking third in the conference in shooting percentage from this range. The Bearcats thrived as a catch and shoot team, rotating the ball well on the wing, avoiding a high rate of turnovers and scoring over 1.12 points per possession in this setting. For a team that floundered so mightily in the standings, it's to be somewhat unexpected that they would rank in the 86th percentile nationally as a spot-up shooting team. Given the personnel returning however, chances are BU will be going with a different look regarding their offensive identity. With spot-up possessions accounting for twice as many shots as any other play-type, the losses of Camara, Jabbi, Wright and Chretien Lukusa means half of the team's usage rate in this setting will be gone.

Binghamton does still retain the services of Jimmy Gray who showed some promise as a sophomore with a limited usage rate. Nearly half of the 6-foot guards possessions were in spot-up sets where he proved a very efficient scorer with an adjusted field goal percentage of over 55 in catch and shoot scenarios. His most important role however will be as a facilitator after he finished second on the team in assists last season. Gray was excellent out of the pick and roll last season, ranking in the 90th percentile when incorporating shots and passes. He was much more prone to looking for his teammates out of this set (nearly a 2-to-1 ratio), but was somewhat more efficient when looking for his own shot. Based on the data at hand though, Gray could combine with Sutton to make a dangerous combination as the guard was at his best hitting the roll man coming off of screens.

The aforementioned big man is the other key to the offense, but again, having only recorded a 9% usage rate last season, there will be questions abound about how he can handle a heavier scoring load. Overall Sutton ranked in the top one-third nationally in scoring efficiency at nearly .90 points per possession, but was wildly inconsistent depending on the manner in which he was getting his touches. As a post-up player and one moving off the ball near the basket, he is well below average, especially for an individual with his kind of size in the America East. With that said, he was a handful on the offensive glass and actually ranks as one of the best transition big men in the country, shooting a remarkable 79% from the floor on the break. For as much polish as Sutton's game still needs, he shows a nack for finding seems in the defense when running the open floor, often cutting down the lane where his teammates are able to find the big target on the move. Despite this, the Bearcats need him to become more of a presence on the block than he has been in the past, especially now that their plethora of shooters has dwindled.

The rest of the offense has simply been too underutilized to make an accurate analysis of at this point. Using the points per possession metric there is a mix of both good and mad amongst the returning players, but when the vast majority have accounted for fewer than 5% of the team's total touches, everything has to be taken with a grain of salt.

Defense was a sore point for Binghamton last season with the team ranking in the bottom half of the conference in every defensive metric save for block percentage and ratio of free throws attempted to field goals attempted. They struggled in most play-types, but did quite well defending the post and isolation sets. Jimmy Gray actually was the teams top performer at this end of the floor last season, allowing just .78 points per possession while accounting for nearly 15% of the total plays defended. His return certainly will help somewhat, though overall the Bearcats lose four of their top five defenders.

If this sounds like a bleak outlook for Binghamton in 2012, that's because it is. There are a few nice pieces on this roster and the potential for a few bright moments, but ultimately, the Bearcats stand a good chance to bring up the conference rear next season.