The thought of former San Diego State standout Kawhi Leonard heading north to Toronto has steadily picked up momentum as the draft moves closer, with several mocks now sending him here. While other prospects may draw more hype and force the Raptors hand at No. 5, the 6-foot-7 physically gifted sophomore seems to make the most practical sense. This team needs a defensive minded forward and no player in this draft class fits that bill more than Leonard. Jonathan Givony of DraftExpress agrees. 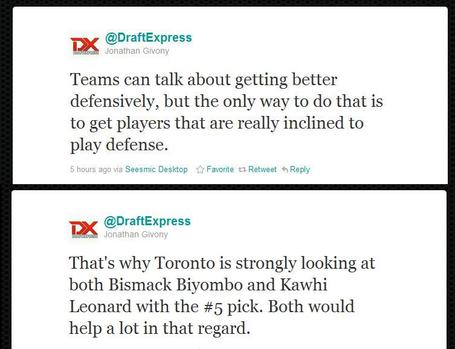 Physically Leonard is an impressive specimen, possessing huge hands and a freakish 7-foot-3 wingspan. He can defend multiple positions, crashes the boards and generally displaying the kind of tendencies that have led some to draw comparisons with Gerald Wallace.

Toronto has players on their roster who can score, so fans need to realize that selecting Leonard is not a move that will bring additional firepower. Yes, he averaged 16 points per game last season, but that was more a byproduct of his athleticism rather than his skillset. This isn't a player who - at least in the short term - is going to be asked to do a whole lot at this end of the floor. Still, his motor, aggressiveness and most importantly his upside make him one of the more intriguing prospects in this draft class. He may take a few years to fully develop (he won't be 20 for another few weeks), but this is the rare opportunity for a team to draft for need, while also taking a chance on a player who develop into a true impact presence down the road.