It wasn't all that long ago Saint Joseph's was the class of the Atlantic-10 and a player on the national scene. From 2000 to 2008 the Hawks topped the 20-win mark five times and made the postseason seven times, including four NCAA Tournament appearances. Since that last tournament appearance though, its been a steady decline in the City of Brotherly Love as SJU has gone 17-15, 11-20 and 11-22 over the last three seasons.

Could this be the year Phil Martelli's squad starts to climb out of the conference cellar? With the veteran coach entering his 17th year with the program and a strong core of talented players returning in 2012, it certainly seems like the Hawks are in a position to leap frog more than a few schools back into the top half of the A-10. SJU brings back enough firepower and does a strong enough job of protecting the basketball that if some defensive improvements can be made, they can certainly improve on their 12th place standing from last year.

Just how good can the Carl Jones/Langston Galloway duo be this season? Jones was fantastic as a sophomore, nearly doubling his offensive production while actually improving his efficiency as he saw his playing time increase substantially. His efforts landed him on the All-Big 5 second team. Galloway was an All-Rookie selection in the A-10 and was named the Big 5 Rookie of the Year, emerging as a solid second scoring option and a true perimeter threat. How high these two raise their games in 2012 will dictate the ceiling for this team.

Forward Idris Hilliard finished third on the team in scoring, second in rebounding and represents the most significant loss for Saint Joe's heading into next season. Charoy Bentley is also lost to graduation, while Patrick Swilling and Carl Baptiste have transfered out of the program. All told though, the Hawks have maintained the bulk of their vital pieces for next season. 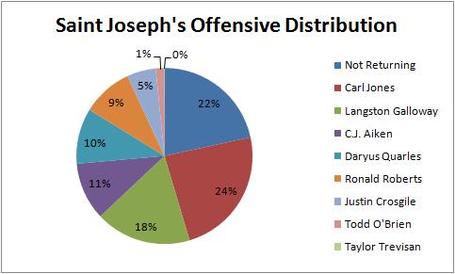 The Hawks were an interesting mix of opposite extremes at the offensive end last season, ranking in the top third nationally for offensive efficiency and free throw shooting, while sitting among the top programs in the country in regards to protecting the basketball. With that said, they didn't shoot well, didn't get to the line often and struggled to create second chance scoring opportunities on the offensive glass. These are factors that will undoubtedly have to change in order to see a significant improvement during the 2012 season.

The offense really begins and ends with returning junior guard Carl Jones who led the team in both scoring and assists in a fantastic sophomore campaign. Overall the 5-foot-11 guard is an efficient scorer, ranking in the top 25% nationally at nearly .94 points per possession, operating primarily as an isolation and spot-up scorer. He isn't blazingly quick off the dribble, but Jones is a crafty player with fairly advanced ball handling skills and a quick spin move that he likes to employ in his mid-range game to create space. Interestingly enough, he struggles as a mid-range jump shooter in general (just 22% from the floor), but when forced into scenarios where he has to improvise on the fly, he is well above average at hitting runners and floaters in the lane. Jones isn't an overly dangerous catch-and-shoot player from the perimeter, but hits just enough from the outside (35%) to keep opposing teams honest. Where he is clearly at his best however is when running the show out of the pick-and-roll, a play-type for which he ranks in the top 15% nationally in overall scoring efficiency. Again, it isn't so much quickness that makes the difference here as it is Jones' feel for the game. Let's look at an example. 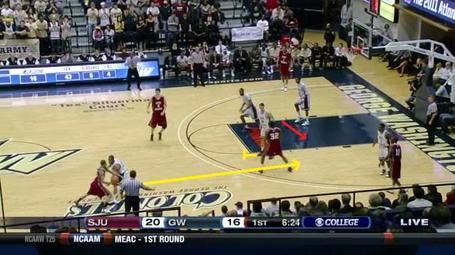 As Jones dribbles the ball up the right sideline a teammate flashes to the elbow to set the initial screen. As this happens, the screener's defender gets just a bit too trigger happy with his hedge, making the move a second too soon, resulting in more of a switch rather than a traditional help rotation. 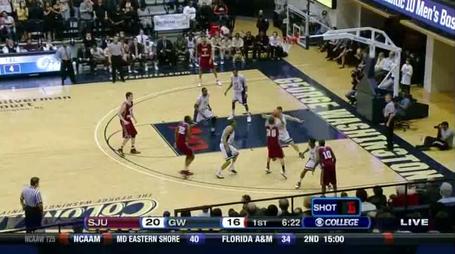 Jones is able to take advantage of this pseudo-switch against the slower frontcourt defender, freeze him with a quick stutter move and let loose a mid-range floater which he banks home. This is a typical move for the guard, who almost always attacks coming off of screens rather than opting for the jumper. This part of Jones' game is still developing but his comfort level with operating as a shooter off the dribble is certainly improving, but don't expect him to start pulling up early anytime soon.

Then there's Langston Galloway who emerged as a true scoring threat in his freshman season, earning All-Rookie honors in the Atlantic-10. Perhaps the most impressive facet of the newcomers first season with the Hawks was his efficiency, which was easily the highest on the team. He was the team's top three-point and free throw shooter, while averaging nearly .99 points per possession, a mark that puts him in the 83rd percentile nationally. Overall Galloway was a strong jumper shooter in his freshman season, producing an adjusted field goal percentage of over 51%, proving much more dangerous as a catch-and-shoot player as opposed to creating shots for himself off the dribble. This is reflected in his play type breakdown, with nearly 40% of his possessions coming in spot-up sets and when he isolates with the ball, he quite frequently will pull the trigger before attacking. Saint Joseph's did begin running sets with him receiving the ball coming off of hand off sets late in the season and the results were impressive. 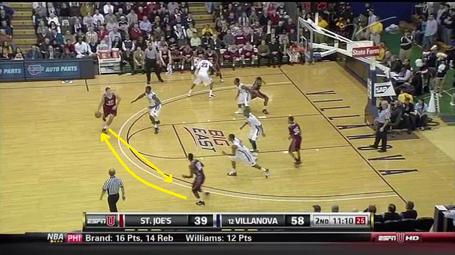 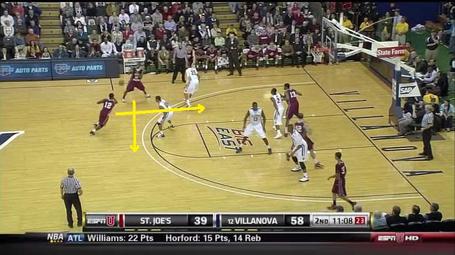 As this initial hand off transpires Galloway flashes to the top of the key where he receives the ball from a teammate who then cuts down the middle of the lane. This cut following the pass drags a defender down as well, ensuring that Galloway is left with space to operate. 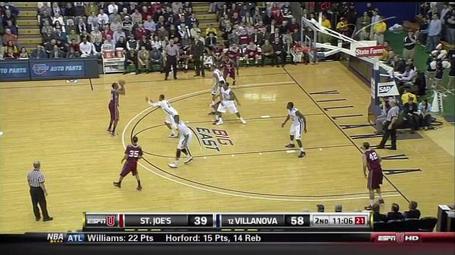 Galloway's defender gets caught rotating underneath the action, leaving the freshman an open look from beyond the arc that he buries. Again, the hope for the Hawks is that as the guards game develops, so too will his ability to create shot opportunities for himself off the dribble. For the time being though, when the team opts to run set plays of this nature, Galloway hasn't disappointed.

It's easy to understand SJU fans looking at C.J. Aiken and getting excited about the future - the potential is tantalizing. As a freshman the 6-foot-9 forward finished third in the nation in blocked shots per game and finished with the second most blocks in a season in school history. He is long, he is athletic and he's only a sophomore. What will be most interesting to watch develop however is the big man's offensive game which is pretty raw, but shows quite a bit of possibility. Right now Aiken is at his best around the rim where he can elevate and use his length to finish plays, ranking among the best pick-and-roll finishers in the nation (top 12%) and almost as highly when cutting towards the basket. It's his ability to face up and shoot that makes him a potentially dangerous offensive weapon looking further down the road. Overall, according to Synergy Sports, Aiken shot 50% on all jumpers taken inside the three-point line, pretty impressive considering his somewhat slow and inconsistent release. Imagine the terror he could be equally capable of elevating over defenders inside and spotting up from 18-feet. For the time being though, expect Aiken to remain a mostly interior scorer as his jumper continues to progress.

Aiken will be joined by another pair of forwards coming off their freshman seasons (noticing a trend here?), Ronald Roberts Jr. and Daryus Quarles. Roberts Jr. certainly isn't a traditional, pure post player, but rather a tough scraper inside with some developing finesse. Nearly two-thirds of his shot attempts come off basket cuts, post-ups and working on the offensive glass, proving an efficient scorer in all three scenarios. He certainly isn't what you would call an explosive player inside, but he elevates well, is physically tough, has a good motor and shows solid footwork. As a freshman, he managed to average nearly a double-double per-40 minutes, nothing to laugh at considering his somewhat undersized 6-foot-8 frame. Roberts Jr. is the kind of player all teams need, a workhorse inside who doesn't need the ball in his hands to impact the offense. Quarles has his ups and downs as a rookie, struggling with efficiency, mainly as a result of shot selection. While the swingman's shooting form isn't bad (high release point, just a bit slow), you can tell that his confidence wasn't always there last season, as he routinely passed on open looks from just beyond the arc, for contested driving attempts. A full season under his belt should certainly help this confidence issue though and when that happens, this shifty perimeter player can prove a nice drive and kick option.

Hofstra transfer Halil Kanacevic will be eligible this season and the 6-foot-8 power forward will be a welcome addition to the frontcourt after earning All-Rookie honors two years ago in the CAA. The 250-pounder is a bruiser who has a good motor inside, rebounds the ball well and operates pretty effectively in the post. Overall he ranked in the 90th percentile nationally in low post scoring efficiency, converting nearly 60% of his shot attempts. The rest of his game is somewhat of a work in progress, especially his touch around the rim which is inconsistent. Still though, he'll provide muscle inside for the Hawks.

Saint Joe's recruiting class consists of just a single player, but it's a good one in point guard Chris Wilson. The 6-foot-3 floor general is rated the 44th best player at his position thanks to his ability to facilitate the offense consistently and create scoring chances for himself. The only thing really holding him back at this point is his shooting touch which prevents him from finishing a large percentage of the easy looks he gets himself.

Defensively this is not a very strong team. The Hawks rank in the bottom one third nationally in defensive efficiency and were at or near the bottom of the Atlantic-10 in turnovers forced, effective field goal percentage against and three-point shooting against (a miserable 40.4%). SJU does excel at defending the area around the rim, not surprising given the disruptive force that is C.J. Aiken, but things tend to deteriorate further out on the perimeter. From a points per possession allowed metric, Aiken is easily the teams best defender, ranking in the 93rd percentile overall at .60 ppp and limiting opposing players to just 28% shooting from the floor. Galloway and Jones both were above average as well, holding opponents to under 35%.

It's going to be an interesting year for the Hawks. There is no reason to think they can't improve on their 12th place finish the last two seasons and a top-half of the conference finish is certainly a realistic possibility as well. Ultimately it will all come down to how far this young team has progressed in the off-season.