There was a time not all that long ago that reaching the NCAA Tournament was an expected part of playing basketball at Charlotte. Under former head coach Bobby Lutz, the 49ers reached the Big Dance six times in an eight year stretch from 1998-2005. Since that time, however, the program has fallen on hard times, bottoming out last season with a 10-20 record that included just two wins in the Atlantic-10.

The return of several key players plus a promising freshman class could spell the start of a gradual improvement for the program, not necessarily a sudden massive jump in the conference, but better than a 13th place finish.

Can second-year head coach Alan Major begin the rebuilding process? He dealt with some issues last season (Shamari Spears), but welcomes back a speedy backcourt and a pair of talented forwards that will be bolstered by a recruiting class that looks very strong on paper. It might be wishful thinking to expect Charlotte to finish in the top half of the Atlantic-10 this season, but should the program return to it's once high standards, will fans look back on 2012 as the year that started the climb?

Charlotte has a modest turnover going into the season with five players gone from a year ago. An'Juan Wilderness and Charles Dewhurst both used up their eligibility as did senior center Phil Jones. Sophomore forward Gokhan Sirin decided to transfer out of the program after averaging just three points per game, but proving a quality perimeter shooter. Then there's Shamari Spears, the team's leading scorer, who was dismissed just five games into the season after being suspended for a third time in two seasons. Clearly he would have been lost after this season regardless as 2011 was Spears' senior year, but he did provide a legitimate scoring threat and was off to a strong start before being removed from the program. 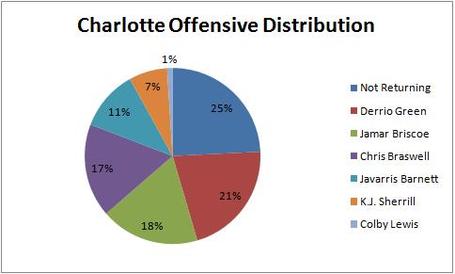 The 49ers - for all of their mediocrity scoring the basketball - were a balanced offense, featuring five players with double figure usage rates and that averaged between seven and 13 points. Most of the positives end there however. Charlotte ranked at or near the bottom of the Atlantic-10 in scoring efficiency, scoring margin and offensive rebound rate. They were in the middle of the pack for perimeter shooting and overall field goal percentage, but still remained in the bottom half of the conference in these metrics. The problem wasn't so much from the perimeter game, but rather the team's inability to finish consistently around the rim. While the 49ers ranked in the top one-third nationally in scoring efficiency on jumpers (.95 points per possession), they struggled to score in the post (26th percentile) and on all other shot attempts at the basket (42nd percentile).

Super quick guard Derrio Green is the team's top returning scorer, coming off a junior campaign in which he posted averages of 13 points, three rebounds and nearly four assists. Overall, we are not talking about a tremendously efficient player as Green shot just 33% from the floor last season, 27% from beyond the arc and had an assist-to-turnover ration of less than 1.5. The one area where he did manage to prove an above average performer was in the pick-and-roll set, where he ranked in the 65th percentile nationally by scoring better than .82 points per possession. He typically looks for his own shot more often than he looks to pass in this play type, utilizing his excellent ability to change speeds in order to blow through the screen and create scoring chances. His first step is a good one, but he often doesn't use it to his advantage in other areas, as he struggles to finish at the rim overall. His jumper tends to waiver as well due to an inconsistency in his release point. The tools are there for him to be a much more productive player beyond what he did last season, he just needs to put it all together in his senior season.

Joining Green in the backcourt will be another speedster in junior Jamar Briscoe, a much better shooter, but someone who struggles mightily with hanging onto the basketball. Despite shooting an adequate 40% from the floor last season, the Baltimore native had a massive turnover rate of 20%, with this problem proving most troublesome in transition where Briscoe gave the ball away once every four touches. With that said, he is a pretty efficient scorer in most aspects of the game. Jumpers accounted for over 80% of his possessions last season and he hit a respectable 40% of these shots, a mark that puts him in the top one-fourth nationally. When he opts to put the ball on floor and penetrate though he tends to struggle at finishing around the rim due to his diminutive stature. Where Briscoe proved his most dangerous last season was when Charlotte opted to run him off screens, giving him the room to get his jumper off. They didn't run these sets all that often, but when they did, the returning junior produced an adjusted field goal percentage of better than 56%, scoring nearly 1.2 points per possession. Let's look at an example. 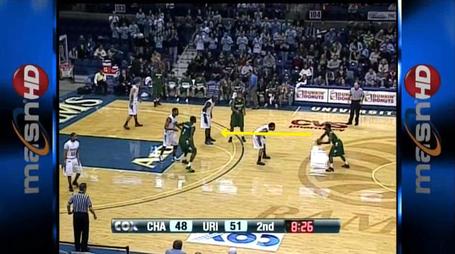 The play begins with Briscoe handling the ball at the top of the key. He passes off to a teammate flashing to the left elbow and then cuts down the right side of the lane. 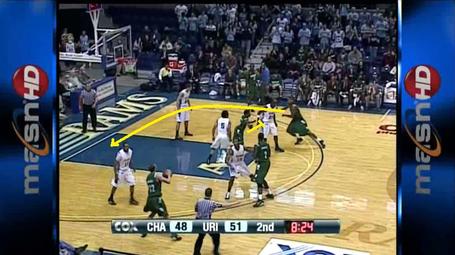 This is where the action picks up. As he cuts down the lane, Briscoe stops and pivots to set a back screen for another teammate who rotates down off the pick and flashes to the left block as the ball swings over to the left wing. In this particular case, the initial screen and rotating post player acts as a diversion (assuming he doesn't establish position inside). 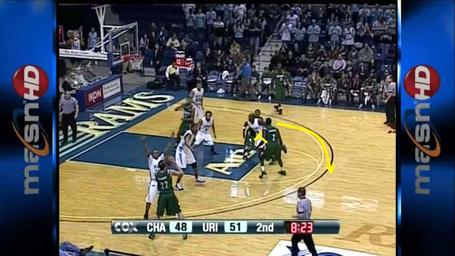 With the ball still on the left wing, a pin down screen is now set for Briscoe at the foul line, allowing him to curl off to the top of the key amidst the confusion of the series of picks set on this play. It's the basic principle of screening for the screener that works so well. 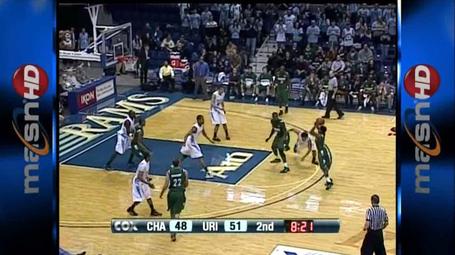 The ball is delivered to a flashing Briscoe who is left with an open look from beyond the arc that he buries. Again, the 5-foot-10 guard is the second best perimeter shooter returning to the team, so don't be surprised if the 49ers run these kinds of sets a little more frequently in 2012.

Forward Chris Braswell contributed solid numbers in his second season with the program, though after averaging nearly a double-double as a freshman, he regressed in his production on the glass as a sophomore. He operates primarily in the post, excelling at establishing position inside with his 6-foot-9, 240-pound frame. Once he receives the ball on the block it becomes somewhat of a mixed bag. Braswell has pretty good quickness, often spinning and laying in the basketball before the defender has time to react, but when that option is taken away, he struggles due to an underdeveloped back to the basket game. When Charlotte can get him moving off the ball however, that is when the big man proves his worth as he shows good hands and a knack for finding open seams. Collectively baskets in transition and rolling off of screens only account for 8.6% of his total possessions according to Synergy Sports, but Braswell shoots over 64% in these scenarios, ranking in the 93rd percentile in scoring efficiency as a roll man. He really doesn't need to change all that much about his game right now - aside from improving his post game - but there's no question he needs to be more productive on the glass.

In his first season seeing significant playing time guard Javarris Barnett emerged as Charlotte's most efficient scorer, despite not being a primary option on offense. The 6-foot-6 returning senior shot 40% from beyond the arc and ranked in the top one-third nationally in scoring efficiency at nearly .90 points per possession. This is a player whose game is built around his jumper, a good thing for the 49ers since Barnett ranks among the most efficient jump shooters in the country (91st percentile), comparable to players like noted BYU gunner Jackson Emery. He has a smooth consistent release, but it typically isn't quick enough that he can get it off without some space and this is very much reflected in the numbers. Barnett shoots 44% overall in catch and shoot situations, but when firing off the dribble, this mark drops off to just 27%. While he tends to rotate behind plays and spot up from the outside, Charlotte will run him off of screens quite often as well looking to free him up for a quick look.

Forward K.J. Sherrill hits the glass very hard, but spends more time operating in the post where he is just an average scorer, due in large part to his 6-foot-7 frame which leaves him a tad undersized to operate on the block against bigger A-10 defenders.

The 49ers welcome a flurry of new players to the roster this season, starting with Georgia transfer DeMario Mayfield who is eligible after sitting out last year. The 6-foot-5 guard had modest offensive numbers with the Bulldogs (he averaged 25 ppg during his senior year of high school), but at this point is known more for his presence as a defender with his strong build. The incoming recruiting class features five players with all four freshman entering the program ranked in the top 70 at their position nationally - a very strong group. Small forward E. Victor Nickerson is the gem of this group given his upside. A versatile, intelligent player, he will need a little time to get stronger and improve physically, but when he does, there is the potential for the 6-foot-7 Georgia native to be a real presence on the floor. He'll be joined in the weight room by 6-foot-9 center Mike Thorne, a very athletic big man with a soft touch who absolutely needs to get stronger at this point in his development. Junior college transfer Ilija Ivankovic will add additional depth to the frontcourt with his 6-foot-10 frame. Guards Pierria Henry and Terrence Williams will join the backcourt, with Henry proving good size, scoring ability and defense for the point guard position and Williams bringing the ability to get to the basket and score consistently.

Defensively Charlotte struggled last season, ranking near the bottom of the conference in almost every metric save for three-point shooting against. From a points per possession allowed metric Briscoe and Braswell are the team's top returning defenders, each holding opponents to less than 33% shooting and forcing turnovers more than 14% of the time. This team will unquestionably need to do a better job defending the rim though as the 49ers allowed opponents to shoot nearly 50% at the basket, a mark that put them in the bottom one-fourth nationally (injuries factored into this).

Ultimately 2012 could be the season before the season in Charlotte. The 49ers can expect a slight improvement but may not turn too many heads in season in which the A-10 figures to be dominated by talks of how far some of the top programs can run in March. Still, a solid improvement could spell big things for the next couple of years as Major continues to build this team.