Share All sharing options for: Could Hofstra Land Jamal Coombs-McDaniel And Momo Jones?

It's been a decade since Hofstra last reached the NCAA Tournament and the Pride have to deal with the massive loss of guard Charles Jenkins to graduations and the NBA. Yes, the 2011-12 season could be a difficult one for fans to swallow. With that said, there's suddenly a pair of reasons to be excited about the 2012-13 campaign if the program gets a couple of favorable bounces.

According to various sources, both Jamal Coombs-McDaniel and Lamont "Momo" Jones will be making separate visits to the Hofstra campus with the possibility of each transferring into the program. 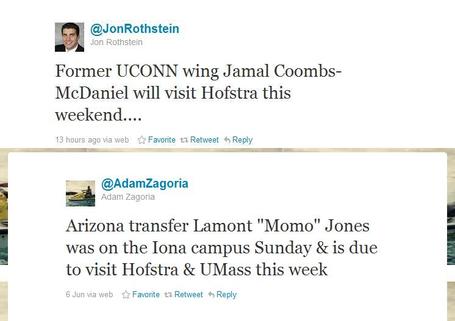 Coombs-McDaniel was a member of the national championship Connecticut team this past season, but saw limited minutes as a sophomore. The lanky 6-foot-7 win certainly shows potential though even with a somewhat shaky jumper. In a few instances he has shown the ability to be a big time scorer hanging 25 and 23 points in back-to-back contests against Providence and Georgetown. Aiding the Pride in this developing story is the recent addition of Patrick Sellers to the coaching staff as an assistant after he had served that same role with the Huskies up until the conclusion of this season.

As Adam Zagoria reported, Momo Jones has already been in the area, having visited Iona, but Hofstra is up next on the list. The former Arizona guard is a New York product who averaged just under 10 points per game in his second season out west. The 6-foot floor general has also shown some scoring tendencies, going for 27 in a win at Cal and a pair of 20-point efforts in games against Oregon State and BYU.

Neither individual has played a leading role in the past at the college level, but were both to land with Hofstra, the Pride would suddenly find themselves with a perimeter duo that could cause a lot of problems for opposing CAA defenses. Stay tuned for more updates.