The center position is by far the most shallow of the five spots in the Missouri Valley Conference this season. It's hard to find big bodies and even harder to find ones that can really play. Several teams are likely to play true power forwards plenty of minutes at the five. That means making a top five list of the best centers in the Valley is not an easy task, but that didn't stop MVCFans.com from trying to do so anyway.

Despite the lack of depth, MVC Chris managed to come up with five of the biggest and most talented players in the Valley. Chris made it even more difficult for himself by only using players that are listed as centers on their school's official site, so he didn't take the easy road by including Illinois State's Jackie Carmicheal or Wichita State's Carl Hall, two power forwards that will probably see plenty of time at the five. 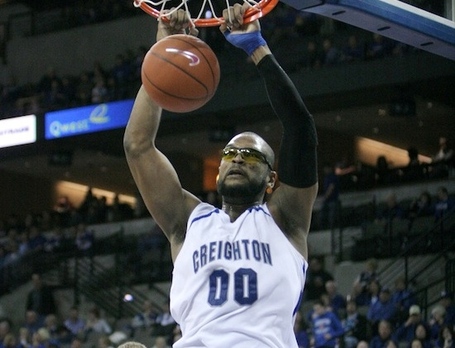 Echenique is a very, very large man and his size and strength alone make him difficult for opposing bigs to handle down low. Echenique is the reigning MVC defensive player and in addition to being on of the best shot-blockers in the Valley, he is also nearly impossible to back down in the post.

The native of Guatire, Venezuela spent the last two summers playing with the Venezuelan national team and went head to head with the likes of former NBA player Ike Diogu and Jonas Valanciunas, the fifth overall pick in the 2011 NBA Draft. Echenique is most valuable to the Jays as a defender an rebounder, but Creighton head coach Greg McDermott recently said on a radio interview on Bluejay Banter that he believes the senior has improved his offensive skill and will give the Jays a more consistent post presence next to all-everything forward Doug McDermott.

VanDeest took a medical redshirt last season and is still recovering, but once he's back to full health he could have a big year for the Bulldogs. VanDeest has shown some flashes of his potential with some big games over his first two seasons, including a 20-point, 4-block performance against Creighton as a freshman. While his per game averages didn't improve by much from his freshman to sophomore seasons, he did learn how to play more efficiently and effectively for the Bulldogs.

VanDeest is skilled in the post, is an excellent free throw shooter and can also step away from the basket and hit a jump shot. If he can come back healthy and step his game up another level, he an power forward Jordan Clarke will give Drake a solid frontcourt to complement forward Ben Simons' outside shooting.

Bradley had a terrible 2011-12 campaign, but one bright spot was the play of their center Prosser. He stepped up his game between his freshman and sophomore seasons and gave the Braves an offensive presence inside. Bradley is likely in for another tough year, but the trio of Prosser, and guards Dyricus Simms-Edwards and Walt Lemon Jr. should be able to put up some points for Bradley.

Egolf is the second Bradley Brave on this list. However, while Prosser was impressing last year Egolf was sitting out with an injury that resulted in a medical redshirt. He'll be back this season and should give the Braves a solid one-two punch at the five.

I don't know much about the Lithuanian newcomer Mockevicius whose eligibility has not yet been determined. In fact, the NCAA isn't even sure what year to classify him as. However, all that will probably be taken care of before before the season begins. The Purple Aces got strong play from their perimeter players last season but were lacking inside. Mockevicius, who helped the Lithuanian U20 National team to the European U20 championship in July, should give the Aces an inside presence to pair with Ryan Sawvell, who had an excellent freshman season last year.

Based on this list, I think it's fairly obvious that there isn't a whole lot of talent at the center position in the MVC. I agree with most of Chris's list, although I probably would have only picked one of the guys from Bradley. I'm not sure a team coming off of a 2-14 conference record deserves to have two players on this list. However, looking at the rest of the centers, I can't come up with anyone else that deserves to be on the list.