As we continue our series of interviews with names and faces around the mid-major ranks, we talk with South Alabama men's basketball coach Ron Arrow, and is joined by his three top returnees - Augustine Rubit, Javier Carter, and Mychal Ammons. 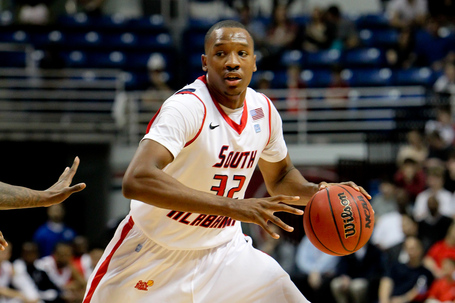 You all by now have surely read that nice, long-winded preview of Middle Tennessee State for our "Mid-Major Top 20" series that we've been running. As part of my questioning whether they can repeat their success, I brought up another Sun Belt team, the South Alabama Jaguars.

They are in the top of the conference in terms of both amount and quality of returning talent, including Augustine Rubit, who finished second in the conference in HOOPWAR behind North Texas' Tony Mitchell, and either just ahead or just behind Mitchell in Ken Pomeroy's rankings depending on the parameters you choose.

I thought this made the Jaguars an interesting squad, so I was thrilled at the opportunity to sit down for an interview with head coach Ron Arrow and his three top returnees - Rubit, senior Javier Carter (pictured above), and sophomore Mychal Ammons.

Mid Major Madness: You say your team is one of the tops in the conference, and you have players like Rubit, Ammons and Carter to support that contention - what do you see in the rest of the conference that you feel gives you a real shot?

Ron Arrow: Well, we have a lot of experience back, but there's also lots of experience in the conference as a whole. Any category that had to do with rebounding or shot blocking last season, we were (ranked) one or two. When it came to three-pointers and assists, we were in the other spectrum. I feel that between that returning experience and off-season recruiting we have improved those weaknesses while gaining elsewhere.

There are two things you can't coach, experience and size, and we feel we've got those two things now. The lack of size hurt us in the past and with 6'9" "Slim" (transfer Gregoryshon Magee) and 6'10" Victor (Juricek, a freshman forward) we're better in those areas - and that also gives us depth, which we haven't had much of either.

MMM: Have you worked on anything in particular with (guard) Trey (Anderson)? I ask that because he had a lot of turnovers last season and was, by a number of different measurements, one of the poorest starters in the conference.

RA: Last year one of our overall problems as a team was our play from the point guard spot - our decision making, our ability to stop the other team's point guard - Trey and Wendell (Wright) both played there, and Freddie (Goldstein) got time there. This season we brought in (transfer) Dre Connor who is a true point guard, as is (freshman) Barrington (Stevens III).

When we were in Canada, Dre showed that he likes to play defense and get fouls on the other team so he can get to the free throw line. This (team) is a democratic society, and only the strong survive. I don't care if you're a freshman or a senior, whoever shows they can get the job done (will start). Dre has shown the overall ability - at this point - to run the team.

MMM: (Coach Arrow was referencing a three-game exhibition trip up in Ontario against Windsor and Western Universities.) Speaking of that trip, what did the team show you during the tour up in Canada? Was there anything in particular you did or didn't like?

There's no room for softness in any category at this level. If you can't get them to buy into that, the other stats don't matter.
- Coach Ron Arrow
On preparing his team for the season

Well, there's never been a perfectly played basketball game, but there were some areas that were lacking. We were not boxing out as well as we could, giving up too many offensive rebounds (19 in their second game against Windsor). The teams we played were nice teams, but in our one game (against Western) we went on a 21-2 run in the third quarter. If I can get that intensity built into our teams, this could be one of the best defensive teams I've ever coached.

Every year we try to be one of the best defensive teams in the conference, if not the nation. Now we just have to get these guys to buy into what we are teaching defensively. I think we showed in that Canada trip that good defense doesn't just keep the other team from scoring, it offers easy opportunities to get offense. If you look at any blowout win, you probably see a team that didn't just play good defense, but also had good offense off that defense. I think the pressure we can put on as a team can make it more fun on offense.

MMM: Augustine, I ran a preview of the Sun Belt Conference's top ten players and was roundly looked at as a fool for considering you as 1B to Tony Mitchell's 1A rather than "clearly the second best player in the conference." How do you feel about that?

Rubit: Well, Tony is a great player and I don't want to say that I'm his equal, but I definitely want to show people I'm the best player in the conference with my play on the court, show it with my actions and not my words.. That means just improving with being comfortable with the ball, committing less turnovers.

MMM: Javier, I noticed that your blocks were way up this past season (15th nationally in BPG). I was wondering what exactly changed? Better skill? Better luck?

Carter: I really just got my timing better. When I looked, I realized that the chances were there, but I wasn't taking them. This will definitely be my year (to lead the nation in blocks). (Coach Arrow added that Carter probably could have done even better had he not played the last 7-8 games of the season with turf toe.)

MMM: Mychal, what was the biggest adjustment for you freshman year, and do you think that adjustment is finally over?

Ammons: It wasn't so much the speed of the game, just a change of positions. I wasn't really used to having the ball on perimeter. I've definitely gotten better, but still have a ways to go, both with my guarding skills and just being able to react on both sides of the ball.

MMM: Is there anything that you have been focusing your practice on to get better at or fine tune?

RA: Every year at this level experience doesn't matter, you've got to get them bullet proof. You have to get them hungry, and we try to make our practices every day a war. There's no room for softness in any category at this level. If you can't get them to buy into that, the other stats don't matter.

These three guys (Rubit, Carter and Ammons) have got to take the next step up, because you are only as good as your seniors and returning players. We've been predominantly a power team and we are what we are, but I think our guys have the ability to score outside and come inside this year. Mychal played outside last season, which he never did before.

Just like in Aug's situation - he got his name and stats early by being a power forward, and he can't relinquish that, but he's got to add to his repertoire, so he went to an impact camp to try and work on his outside game. All our guys are athletic and they can make things happen.

MMM: What one thing will your fans and opponents be surprised by when the season finally gets underway?

RA: I hope they see a large improvement in the weaknesses we had last season. The best compliment a coach can get is that your team plays hard. I don't brag too much, but we have the capabilities to go out and have a good year - but then its on us. I appreciate the numbers (on paper), but it's on us now; even without this talk and this interview to get us exposure, it's still on us now to go out and get it done.

MMM: Do you have any games circled on the schedule already?

RA: Last year (Florida State) played us and they beat us pretty good; we'd definitely like to avenge that one and these guys best have it circled, but we've got a long way to go. I think (the Canada) trip put us ahead of where we would be right now otherwise. (FSU coach) Leonard (Hamilton) does a good job, and they're a top team defensively every year. But we enjoy being able to take down the big name teams, and we've shown that when we beat Arkansas and Florida on their home courts ('09), plus we beat LSU on the road last year.