Appalachian State will move into a new conference home next year and they will do it with a new look that is sure to raise some eyebrows.

Share All sharing options for: Appalachian State Updates Their Logo

Appalachian State will be making the switch from the Southern Conference to the Sun Belt this offseason and the Mountaineers decided to update their logo. I'm all for retro looks but what the heck is this? 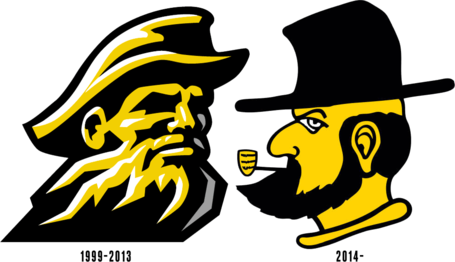 Yes, the Mountaineers have gone from a chiseled man of the mountains to a cross over Simpsons/Duck Dynasty character with a corn cobbed pipe. Apparently this hillbilly is named Victory Yosef and App State could not be more excited according to a release from the school:

"The excitement that Victory Yosef has generated among our students, alumni and fans since we introduced it as a throwback logo last fall has been overwhelming," Appalachian State director of athletics Charlie Cobb said. "Due to its popularity, it only made sense to make Victory Yosef a permanent part of our branding. We hope that it endures as a recognizable mark of Appalachian athletics for years to come."

Appalachian State was poised for a breakout year after a 15-16 record a year ago, but thus far the Mountaineers have been disappointing to say the least with a 1-5 mark. Maybe Victory Yosef is the boost App State needs.