Toledo outplayed Kansas in so many aspects of the game on Monday night, but the Jayhawks had more size and talent -- and more points -- in the end. But this first loss was nothing to be down about.

Someone call Tod Kowalczyk and tell him to put a fence around Nathan Boothe. He will need to if he wants to protect his sophomore from the vultures who will come calling to steal him away.

The sophomore big man shined against Kansas on Monday, with 15 points and five assists, but he and the rest of the Rockets were just outmatched against the Jayhawks. KU walked away with a 93-83 win to remove the zero from the Toledo loss column. 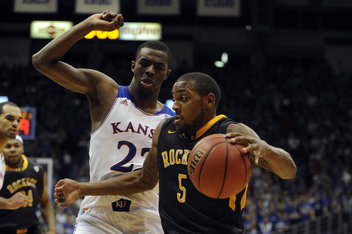 More on the first Toledo loss over at Hustle Belt.

It was a case of talent and size winning out against a team with hustle, heart and a lot of want. No one was going to outplay Toledo. That wasn't how the Rockets were going to lose.

If you are Kowalczyk you walk away from this game enthusiastic about the team you have pulled off the bottom rung of the MAC ladder. This was a team that was 4-28 in 2010-11. This was a team that even two years ago looked lost and as if they were not quite getting it, even while finishing 19-17.

This is a team that gets it now. This veteran squad will be hard to beat for anyone in the MAC if they play with the hustle and determination that they showed Monday.

You could see the look on Bill Self's face during the first half as Toledo found ways to frustrate the Jayhawks. They couldn't outrebound them (Rockets lost out on the boards 44-28), but they could react and move into position and act like a swarm of gnats attacking the ball at every opportunity.

The young Kansas team, a team of stars whose names were known nationally long before they put on their jerseys, looked mentally unprepared for what they were facing.

But there is only so long that that kind of effort can win out against the talent of Kansas. Eventually there was going to be a run, and it came. Toledo missed on a couple of possessions in a row and the game moved in favor of Kansas.

The loss column will show a "1" for the Rockets, but they won over a lot of fans. Whether it was moves of Nathan Boothe inside, or the long-range shooting of Julius Brown, there was a lot to like coming out of this loss.

There is no way that Tod Kowalczyk or any of these players should leave Phog Allen Fieldhouse with their head low. This was a big win for this program, even if the scoreboard didn't show that result.