Matthew Dellavedova started for four years at Saint Mary's. It's hard to argue any Gael before him had a better career. Outside of college, he went toe-to-toe against NBA talent at the London Olympics. Despite all that, he's not getting any hype. Is the NBA in this Aussie's future?

Matthew Dellavedova began his career at Saint Mary's as another one of the many Australian imports to find their way to Moraga. After four seasons as a starter he finished his career ranked first all time for the Gaels in points, assists, minutes played, three pointers made and attempted, free throw percentage, games played, starts and wins.

The Gaels have been on an upward trajectory ever since Randy Bennett took over in 2001, after a two win season. When Dellavedova arrived in 2009, the angle of the upward trajectory moved closer to vertical. The Gaels, with Delly, have seen the postseason every year, the program's first Sweet 16 and first back-to-back NCAA Tournament appearances.

Dellavedova made an immediate impact as a freshman, scoring 19 points and dishing out four assists in his first game (also his first start). His impact grew over the years, though with 12.1 PPG and 4.5 APG as a starting point, there was no room for big jumps in production.

As an underclassman he shared the offense with point guard Mickey McConnell, who as a senior was named the WCC's Most Valuable Player. With McConnell's departure after the 2011 season the point guard spot became Dellavedova's alone, and he promptly won WCC MVP as a junior. 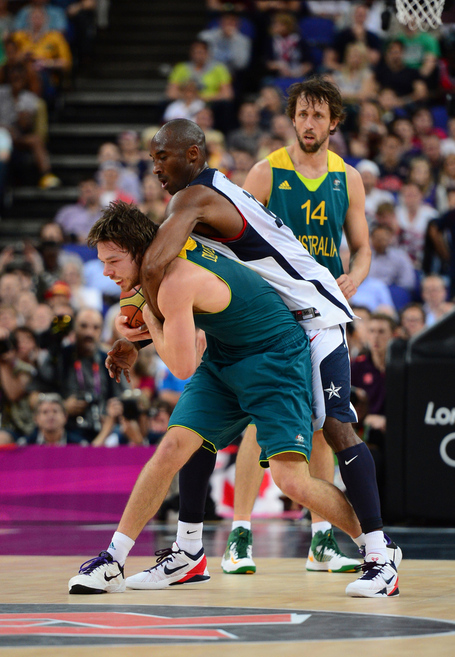 The photo above shows Kobe Bryant fouling Dellavedova in the 2012 London Olympics. Dellavedova, along with fellow Saint Mary's product and current San Antonio Spur Patty Mills, played for Australia in London. He averaged 7.3 points and 4.5 assists as a starter in all six games.

A question mark for any college player turned NBA prospect is their ability to compete against NBA talent. This is especially true for mid-major players who don't often get to face high-level college talent. For Dellavedova that question has been partially answered. The Boomers, as the Australia men's national team is known, faced 16 NBA players before going up against what could well have been an NBA All-Star roster in Team USA.

If you're to look at the 40.4% shooting percentage on it's own you wouldn't be too impressed with Dellavedova as a shooter. So why then is "Excellent shooter" listed as one of Dellavedova's strengths by ESPN's Chad Ford? Because of Dellavedova's 421 shots from the field this past season, 225 of them came from beyond the arc. His proficiency from deep gives him an effective field goal percentage, as a senior, of 50.6%.

As a point guard, ball handling is of the utmost importance. His 6.4 assists and 2.8 turnovers per game result in an assist to turnover ratio of 2.3 to 1, which was the 50th best ratio in the nation. However, the top-50 list is littered with players who played less than 20 minutes per game. The nation's highest ratio last year came from Taylor Dunn of LaSalle, who played just 5.4 minutes per game. Dellavedova averaged 36.4 minutes per game. Eleven times last season Dellavedova was on the court for the full 40 (or 45) minutes.

At 6'4", Dellavedova has great size for the point guard position not just at the college level but also at the NBA level. His size allows him to see over defenders as he runs the offense. It also allows him to be an effective two-guard, a position he played regularly as a freshman and sophomore.

He knows how to lead a team and especially an offense. The Gaels have ranked in the top ten in the nation in points per possession every season that Dellavedova has been in Moraga (5th as a senior, 8th as a junior, 5th as a sophomore and 1st as a freshman). Part of that leadership comes through his words; he didn't let a mouth guard keep him from being one of the game's most vocal players. The other part of that leadership comes through his actions. With 15.8 points and 6.4 assists, Dellavedova was at least partially responsible for 28.6 of the Gaels points per game (and that's a low end figure assuming he only assisted on two point baskets).

The ball screen has become the preeminent feature of offenses at the college level and Dellavedova is a master at utilizing it. Master, or as Gonzaga coach Mark Few prefers, "Maestro". It's not an aspect of the college game that is lost in transition to the pros. The Utah Jazz, behind John Stockton and Karl Malone, ran the pick and roll to perfection. In Dean Oliver's masterwork, Basketball on Paper, three Utah Jazz teams from the '90s show up in his list of the top 25 historical offenses (Table 3.2). Dellavedova is a player capable of making an immediate impact on a team with a fondness of the pick and roll.

He's a great offensive player but an average defender at the college level. At the NBA level his defense could be a major liability. He is lacking in both lateral quickness and length (his wingspan of 6'4" is no greater than his height with shoes).

Somewhat coupled with his lack of lateral quickness is his lack of explosive athleticism. On the offensive end he is able to make up for this with his high basketball IQ and polished offensive ability. However, once again, this will hamper him defensively against guys like John Wall or Russell Westbrook.

There is no consensus, nor anything close to a consensus, on where Dellavedova will go. Just take a look at the prospect rankings above, 45 spots separate his ranking by ESPN and Draft Express. He opted out of the Portsmouth Invitational Tournament and that has no doubt hurt his draft stock and may have been the contributing factor to his lack of inclusion at the NBA Draft Combine in Chicago.

So far this offseason he has worked out with Brooklyn, Denver, Minnesota and most recently Phoenix.

From my perspective, Dellavedova's best shot at a roster spot via the draft is on a team that needs a back up point guard and has a late second round pick. The team that best fits those criteria is the Indiana Pacers.