University of the Pacific Rejoins the WCC

The Pacific Tigers' second stint with the West Coast Conference, a conference the Tigers helped found back in 1952, officially begins today.

Share All sharing options for: University of the Pacific Rejoins the WCC

The Tigers have been members of the Big West since 1971. Despite numerous membership changes due to realignment, Pacific has always been the only private school in the Big West. This incongruity, coupled with the expansion of the all-private-school WCC under commissioner Jamie Zaninovich, led to one of the most common sense moves in the modern era of realignment. On March 28th of last year the West Coast Conference and the University of the Pacific announced that, effective July 1st, 2013, the Tigers would become the WCC's tenth full member.

Things have been changing quite rapidly in Stockton this off-season. Not only are the Tigers' dealing with the loss of their longtime head coach and conference affiliation, but a massive amount of their roster as well. The Tigers' leading scorer, Lorenzo McCloud, along with forward Travis Fulton, earned Second Team all-Big West honors. Those two, along with five other players will not be returning next season due to an exhaustion of their NCAA eligibility.

The Tigers may take a dip in the short term. Losing seven upperclassmen and a coach should be enough to assure a bottom of the standings season. Don't let the short term fool you into thinking the addition of Pacific by the WCC is a bad move for the conference. 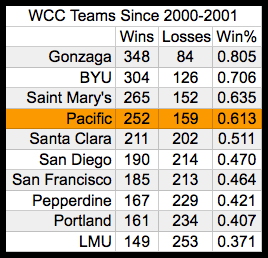 As you can see, Pacific boasts a better winning percentage, by a significant margin, than six WCC teams since the 2000-2001 season. So, the WCC adds a winner, that's good but that's not all. Stockton, CA is the center of a metropolitan statistical area that is home to 685,306 people. Stockton's MSA population is slightly greater than both Spokane and Provo's. However, the real boost to the conference's footprint comes in the form of the TV market within with the University of the Pacific is located. Sacramento-Stockton-Modesto, according to 2012-13 research from Nielsen, is the nation's 20th largest TV market. This means that WCC member institutions are located in the nation's 2nd (Los Angeles), 6th (San Francisco-Oakland-San Jose), 20th, 22nd (Portland), 28th (San Diego), 33rd (Salt Lake City) and 73rd (Spokane) largest media markets.

The addition of Pacific will bring about a few changes. Firstly, the conference will move to an 18 game double round-robin schedule from the current 16 game double round-robin. Considering every WCC team played at least one non-Division 1 opponent last season, the addition of two guaranteed games against a solid D1 program each season should be a positive for most teams in the WCC. The only exception is for Gonzaga and BYU. The loss of two non-conference games means that rationalizing a game against Campbell or Northern Arizona will become harder. Without those games, coaches will have less ability to give bench players meaningful minutes and fans will have less chances to see a guaranteed home blow out victory.

The other major change affects the conference tournament. Since 2003 the top two seeds in the tournament have received double-byes all the way to the semifinals. The new format for the 2014 tournament is as follows. Seeds 7-10 will play on Thursday, March 6th. The men's tournament will then take Friday off to allow the women's tournament to play its four quarterfinal games. On Saturday, March 8th, seeds 1-6, along with the two winners from Thursday, will take part in quarterfinal action. Then there will be another day off on Sunday before the semis and finals on Monday and Tuesday.

Maybe this move is so simple and makes so much sense because it isn't based around a football team. Then again, maybe not, because BYU's move to the WCC was almost entirely based upon the Cougars' football team. Whatever the case, the West Coast Conference and the University of the Pacific have proven realignment doesn't need to be absurd. In an age when Boise State can seriously consider moving to the Big East, this is a welcome change of pace.