It was opening night in the Atlantic 10 for four squads tonight. A rivalry was renewed in Richmond, while a great match up went down in Philadelphia.

An in-state and old Colonial Athletic Association rivalry was rekindled in the Siegel Center tonight as George Mason and VCU tipped off their first Atlantic 10 game of the year and the first ever for Mason. Both teams struggled from the field tonight as they combined to just shoot 35% in total.

Treveon Graham was limited to just two points in the first half and was a big a reason why this was such a close game at the half. In the second half, the Rams continually pulled farther and farther away from the Patriots as Graham heated up and finished with 15 points on the night. Briante Weber added 12 points and 5 steals for the Rams in the 71-57 win.

Jalen Jenkins finished the game with 10 points and 12 rebounds for the Patriots. Bryon Allen added 13 points, while GMU star Sherrod Wright was held to just 6 points in a 2-for-8 evening from the field.

The biggest factor in this one had to be the free throw distraction from VCU's student section: 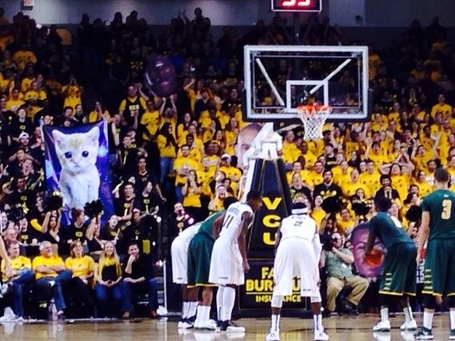 To say that La Salle escaped with a win tonight would be an understatement. George Washington was beyond resilient tonight and just would not go away. A late steal in the final seconds for GW was foiled by a charge call and the Explorers escaped with a 76-72 victory.

Three point shooting was the biggest downfall for the Colonials tonight as they shot just 21% from beyond the arc.

Tyreek Duren, Sam Mills, and Tyrone Garland combined for 45 points for the Explorers. For George Washington, Isaiah Armwood lead the way with 15 points and 12 rebounds.